That's What Friends Are For (Starsky and Hutch zine)

That's What Friends Are For is a gen Starsky and Hutch anthology. Some issues are individual novels. 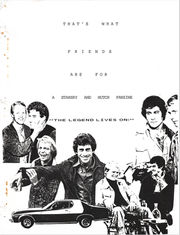 That's What Friends Are For 1 was published in 1996 and contains 161 pages. There are no interior illos, but some black and white screenshots.

THIS IS MY SPACE—I DON'T HAVE MUCH TO SAY. I'VE MOVED ON TO OTHER THINGS, MAINLY "FOREVER KNIGHT," BUT I FELT I HAD TO FULFILL MY COMMITMENT TO DO THIS S&H ZINE—WE NEED ALL THE STRAIGHT ZINES WE CAN GET! TO BEGIN WITH, I WAS SO THRILLED TO FIND S&H FANDOM STILL EXISTED. BUT ALL THE SLASH RUINED IT FOR ME,

MADE ME ANGRY AND SAD, SO I HAD TO GET OUT. MY STARSKY AND HUTCH ARE NORMAL, MACHO, WOMEN-LOVING MEN, AND THOSE WHO THINK OTHERWISE MISSED THE ENTIRE POINT OF THE SHOW! AND DESPITE WHAT I WAS TOLD, THAT S&H FANDOM IS SLASH ONLY, I FOUND PLENTY OF S&H FANS OUT THERE WHO AGREE WITH ME! ANTI-SLASH, UNITE! 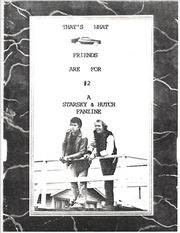 THIS ZINE IS DEDICATED TO A VERY SPECIAL PERSON: KATALIN KOROSSY, WHO KNOWS TRUTH WHEN SHE SEES IT, AND, BELIEVING IN WHAT IS RIGHT, HAS THE GUTS TO STAND BEFORE THE LIONS AND SMACK THEM ON THEIR NOSES! YOU TELL 'EM, KATI!

SPECIAL THANKS TO ALL THE CONTRIBUTORS (ESPECIALLY FOR BEING WILLING TO TYPE THEIR STORIES FOR ME!), AND TO ALL THE FAITHFUL FANS, BOTH OLD AND NEW, OF "STARSKY AND HUTCH," WHO HELP TO KEEP THE SHOW ALIVE! THANKS ALSO TO LYNN HILL, AND AS ALWAYS, NEVER-ENDING THANKS TO PAUL M. GLASER AND DAVID SOUL!

THIS TIME I HAVE PLENTY TO SAY, IN HONOR OF KATI'S COURAGEOUS STAND—ANTI-SLASHERS, SEE NEXT PAGE. ANY OTHERS MIGHT PREFER TO JUST SKIP IT.

The editor includes a long editorial IN CAPS that is an anti-slash diatribe. See GARBAGE LIKE THAT HAS NO PLACE IN FANDOM. 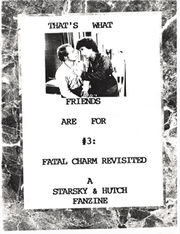 That's What Friends Are For 3 was published in 1996 and contains 152 pages. It has the subtitle: "Fatal Charm Revisited."

THANKS TO ALL THE CONTRIBUTOR'S, WITH A SPECIAL THANK YOU TO K HANNA KOROSSY. I NEEDED ANOTHER STORY FOR THIS ZINE, BASED ON FATAL CHART'I, SO I ASKED KATI TO WRITE ONE—AND SHE DID, IN LESS THAN A WEEK, EVEN THOUGH SHE HAD ALREADY CONTRIBUTED EIGHT SHORT STORIES FOR TWFAF #2, BESIDES HAVING TO TYPE CATHEE'S STORIES WHEN HER COMPUTER CRASHED, AS WELL AS WORKING ON HER OV'^JN S&H FANZINE. 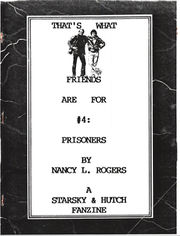 That's What Friends Are For 4 was published in 1996. It is a 92-page novel called "Prisoners" written by Nancy L. Rogers.

From Media Monitor: "Starsky is abducted and tortured with attempted rape. Some hurt/comfort, nothing graphic."

SPECIAL THANKS TO THE AUTHOR, NANCY L, ROGERS, FOR ALLOWING ME TO MAKE A SMALL CHANGE IN HER STORY, JUST SO IT COULD BE PUBLISHED BY INTERTWINED, IN ORDER TO GIVE S&H "GEN" (ANTI-SLASH!) FANS THE PLEASURE OF READING THIS EXCELENT STORY. (IS "ATTEMPTED" RAPE BETTER THAN ACTUAL RAPE? IN THIS CASE, YES!) (AND I'M SORRY, NANCY, THAT YOU HAD TO RETYPE THE WHOLE THING! THE FILE IS PROBABLY OUT THERE SOMEWHERE, LOST IN CYBERSPACE! OF COURSE, NOW YOU'LL FIND IT!) THANKS, ALSO, TO CAMI CUTLER FOR HER INVALUABLE INPUT TO ME IN REGARD TO THIS STORY. AND AS ALWAYS, NEVER-ENDING THANKS TO PAUL AND DAVID. [1]

Why? Why, after more than seventeen years, are people still writing stories about a four-season television show from the '70s? Hasn't everything that could be said already BEEN said?

Maybe. But not necessarily.

The first fanzine I ever read was editor Nanci's (Quantum Leap 'zine Standing on the Edge of Time. (Thank you, Nanci.) That launched me into an area heretofore unknown. I bought several more QL 'zines before I got The Mind Enslaver. (Thank you again, Nanci.) Then TNT started airing the Starsky & Hutch series, which I hadn't seen since the early '80s - long before I knew that S&H fanzines existed. Okay. That did it. I wanted more. Since most of the S & H 'zines were out of print (therefore unavailable) by the time I found out about them, I can only speculate on their contents. The only way to get more stories was through Nanci's Intertwined service, and by writing them myself. So, with apologies to any authors I've inadvertently copied, I ask the readers' indulgence in this matter. Read the story and let me know what you think. 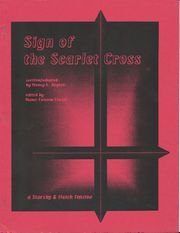 That's What Friends Are For 5 is a novel by Nancy L. Rogers called "Sign of the Scarlet Cross." It was published in 1997 and contains 90 pages. Cover by Nancy L. Rogers. In 2003 a used copy of the zine reportedly sold on eBay for $242.

From the author via Black Bean Soup: "Rated a very strong PG-13 due to content (some hurt/comfort and a 'near-death' experience with religious overtones.)" 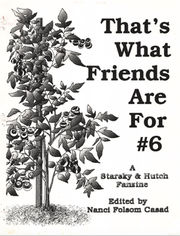 That's What Friends Are For 6 was published in 1997 contains 171 pages. Artwork is by Pat Farrar, originally printed in The Mind Enslaver.

From the editor (who finally drops the all-caps font):

Special thanks to the Intertwined gang of authors: Kati, Merry, Mary, Nancy, Gretchen, and our newest "addition" Linda! I appreciate your talent and hard work. Here's to many more years (years?!) of working together, to give the S&H fans what they want: great fiction that remains true to the wonderful friendship of Starsky and Hutch, vdio proved that two macho, sexy men can touch and ccmfort and love each other and not be "gay."

The cover of this zine was designed by Nancy L. Rogers. (Have you figured it* out yet?) Thanks, Nancy, for your extra artistic effort!

Thanks also to you, the loyal, dedicated S&H fans who have not only kept the

Legend alive, but, by your encouragement, have kept this series of zines ("That's What Friends Are For) going. May there be many more to come!

To Lynn Hill, who got this all started for me: Sorry for yet another Belated Happy Birthday! Maybe next year I'll make that August deadline!!

And as always, a very special Thank You to Paul and David for giving us these two wonderful characters that we have never been able to let go of. Their friendship is eternal, and so is our love for them. S&H Lives...Forever! 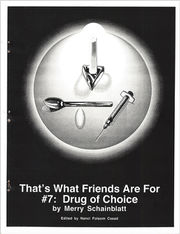 That's What Friends Are For 7 is a novel called "Drug of Choice" by Merry Schainblatt. Published in 1997, it contains 111 pages. It was edited by Nanci Folsom Casad. In it, bad guys get Hutch hooked on heroin again.

From the Starsky & Hutch Archive where the story is now online:

Merry first wrote and published this story for a small fan convention, and then sent it to fans by email. In 1998 the novel was published for wide-spread release by Intertwined, in That's What Friends Are For volume 7, as a stand alone novel. The editor was Nanci Folsom Casad. Merry added a major scene for this version, and at the editor's request removed several words although she didn't want to remove them....

From the editorial in the zine:

From the editor: After the success of TWFAF #3: Fatal Charm Revisited, someone (and I'm sorry but I don't remember who!) suggested doing a "Fix Revisited" fanzine next. After reading Merry's Drug Of Choice by email, I decided I should do just that — a zine with stories based on The Fix episode, as well as another regular zine. But then a problem arose. We had too many Fix stories and not enough regular stories, plus Drug Of Choice turned out to be a longer story than I first thought it would be. The only solution was to let Drug Of Choice stand alone as a novella and have a section in the other zine with more Fix-based stories. It all worked out very well, I think!

Although The Fix is one the best S&H episodes as well as among most everyone's favorites, I always thought the ending was just a bit too tidy. That was the problem with episodic tv in those days. Anything and everything might happen, but it was always resolved by the end of the hour and rarely mentioned again in future episodes. I don't think an addiction to heroin could be so easily resolved or forgotten. On that premise. Merry goes beyond the end of the episode and explores the heroin addiction in a more realistic, gritty story: What if Hutch was abducted and force-addicted again, only this time Starsky isn't there to help him kick it?

"Drug Of Choice" was originally published in a private S&H Bash (get-together!) zine and was emailed to some fans by Merry. This is a revised edition with a major scene added, making it a longer and slightly different version. Either way, it's a great story! Thanks, Merry, for all you did to make this story available to Intertwined, especially changing a few words here and there, even though you didn't really want to!! ;-)

Zine cover designed and created by Nancy L. Rogers, based on an idea by Nanci Casad. ("Hey, Nancy, how about a spoon and a candle and a syringe in a circle of light . . .?!") Great job, Nancy!!

I was amazed as I read this. It is awesome. I couldn't stop reading it once I started. I have just recently found this site as I finished writing my own story. This was great. I too, had wondered what would happen if Hutch ever got addicted again. Their loyality to each other and the Me and thee was great. I also loved how you had Starsky growing up without Hutch. He would have too. But became a kid again when he got Hutch back. [2]

I LOVED this story! It made me crazy and angsty and I would have to stop reading it, but like a strong drug, I couldn't get it out of my mind so I would go back for my fix and it would just get more intense and good. Me and Thee is definitely my drug of choice and you provided what I needed. Thanks for the great read. [3]

i found this story very compelling- thank you. i've always thought there was a chance of hutch getting addicted again and i liked the twist of him being re-addicted and let go. also, starsky is amazing in this story- so completely loyal to hutch. lovely comfort going on here. i liked it very much. well told and well done! [4] 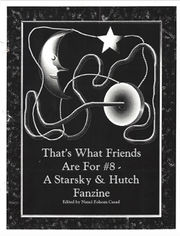 Thanks to my ever-patient contributors, the usual gang of great writers who make these zines possible. You keep writing and I'll keep publishing! We need all the "straight" S&H zines we can get! And, as always, a special thanks to Paul and David. With a new "CHiPs" reunion show, can a new S&H show be far behind?!

[The Nature of Sacrifice]: The story takes place after the Fix, Hutch is still not quite ready to go back to work and Starsky is doing some police work on his own in a small town. Now a Starsky without a Hutch is bound to run into some trouble and when a Starsky is in trouble, even weak and hurting, Hutch will go and find him. [5]