The Lucky & the Strong

From Fanlore
(Redirected from The Lucky and the Strong)
Jump to: navigation, search 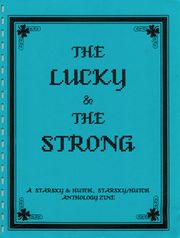 The Lucky & the Strong is a gen and slash Starsky and Hutch fanzine. It has 156 pages (78, 100 words) and one single piece of interior art by Baravan. It required an age statement to purchase.

This zine accomplished a rarity -- it was published ahead of schedule, premiering at ZebraCon II.

The name of this zine comes from "The Rose" lyrics by Amanda McBroom which was used for the very, very early songvid, The Rose.

The title page of the zine asks that fans "do not list this or any Idiot Triplets zine on any computer network." In 2008, the publisher created her own website to facilitate the selling of her zines.

From the editorial: "Probably everyone agrees that mixing S&H and S/H in one zine is not the ideal method of presentation. However, that's the way the contributions came in, and we didn't have enough to make separate zines. For the readers' convenience, we've separated the two genres. Everything up to and including the 'Decorated for Death' stories is '&'; after that we have '/'. We hope this delineation is helpful." 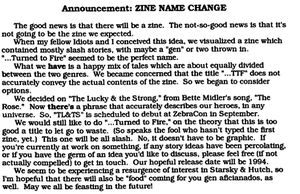 When my fellow Idiots and I conceived this idea, we visualized a zine which contained mostly slash stories, with maybe a "gen" or two thrown in. "...Turned to Fire" seemed to be the perfect name.

What we have is a happy mix of tales which are about equally divided between the two genres. We became concerned that the title "...TTF" does not accurately convey the actual contents of the zine. So we began to consider options.

We decided on "The Lucky & the Strong," from Bette Midler's song, "The Rose." Now there's a phrase that accurately describes our heroes, in any universe. So, "TL&TS" is scheduled to debut at ZebraCon in September.

We would still like to do "...Turned to Fire," on the theory that this is too good a title to let go to waste. (So speaks the fool who hasn't typed the first zine, yet.) This one will be all slash. No, it doesn't have to be graphic. If you're currently at work on something, if any story ideas have been percolating, or if you have the germ of an idea you'd like to discuss, please feel free (if not actually compelled) to get in touch. Our hopeful release date will be 1994.

We seem to be experiencing a resurgence of interest in Starsky & Hutch, so I'm hopeful that there will also be "food" coming for you gen aficianados, as well. May we all be feasting in the future!

The original title WAS later used, see ...Turned to Fire. 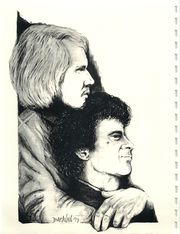 See reactions and reviews for A Great Ending.