You may be looking for the Due South zine, The Long Way Home. 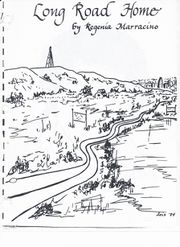 From the author in the proposed zine section of Universal Translator #24:

A story of loss and fear. A story that finds Starsky pushed over the edge and Hutch his only lifeline. A story of patience and perseverance. A story of trust and friendship.

From an ad in Shootout #7

LONG ROAD HOME, a one-story zine to be published some time this year. Starsky is kidnapped by his prisoner and left in rather poor physical and mental health. It's up to Hutch to get him back in one piece. A definite h/c for those who like that sort of thing.

The author notes in the editorial:

At the time I finished this little monster, I wasn't sure what city S&H is supposed to take place in... and the answers I got in Between Friends didn't help!! (TV City... indeed!) Now I do. It's Bay City. Saw it on one the uniformed officer's sleeve... BCPD. However, I'd already gone with L.A....

The essential magic of the moment stays the same after nearly a decade: the arrival of an absolutely new SH zine signals a day to remember. I know I've said this before but I'd still like to say yet again that the debt of gratitude is always there to all the people whose gifts produce the zines which are one of the important aspects of fandom. Like fans, zines come in all shapes, sizes and points of view. With zines, as with fans, there is no single 'officially- approved' style. The diversity is enriching and welcome.

So - it was good to receive 'LONG ROAD HOME'. Regenia has a story to tell and narrative gifts to carry it along with pace and vigor. If I say that LRH takes me back to First Season (and - like everyone? - I love First Season), that statement should be regarded as a first-rate compliment.

I like this zine for its directness and sincerity and spontaneity. My impression is that it's a story the author wanted to write and was writing to share. I enjoyed a lot of the dialogue - wondered whether some lines reflected current U.S. idiom or, rather, Regenia's own inventive style - probably the latter? e.g. "I've always maintained your elevator doesn't go all the way to the top..." The colorful speech is nice. I enjoyed "ye olde editorial" - a lot of constructive comment there. And I enjoyed the author's portraits of S&H - how satisfying to have the talent to illustrate your own story.

There was reference to delay in production, but this zine would win no award for delay. Much more in order are congratulations on a largely single-handed achievement which kept very much to its proposed timing.

I know from my constant correspondence how S&H fandom in U.K. goes on growing, with new people coming in all the time. The legend lives on, and I believe both old and new fans will welcome a new SH zine in which the author's zest and commitment and enjoyment in the writing, are communicated to the reader.

"A lot of love and labor went into it," we read on the editorial page. Yes. And it shows.

P.S. And the Rebel Yell adds a special classy note. [1]

It takes nerve to plunge right in to published S&H fanfiction with a zine-length novel, and the results are not always all one would wish. LONG ROAD HOME is not going to elicit cries of adulation - but it doesn't deserve brickbats either. It's almost an 'old-fashioned' story, reminiscent of the early days of S&H fanfic, and by that token it may silence the 'they don't write 'em like that any more' bitch in.

There is more to SH than the "/" premise, as was proven by Faddis, White, Bartlett et al. , in the days of the ZEBRAS and their contemporaries. The germinal S&H action-adventures, with plenty of gutsy emotion and h/c for spice, are few and far between these days, and LRH is out to remedy that lack.

In part it succeeds. The plot is stretched a tad thin, but this is escapist 1iterature, right? Starsky is kidnapped by Sutterman, the villain he's escorting to Reno, but it isn't the normal pay-up-or-he-gets-it kidnapping. This villain is a psycho (all the best ones are, aren't they?) who has a very unhealthy fixation on DMS and an active imagination. He also has the somewhat twisted idea that if he hurts Starsky badly enough and for long enough, then Curly will return his affections. (Well, I told you he was a psycho.) He's aided and abetted in this design by a Doberman, two henchmen, and his pilot, Cordell, who is rather out-of-place in this set-up, as he's basically a Nice Guy. I mean, when Starsk goes down with the 'flu, it's Cordell who tucks him up with o.j. and aspirin. And he also contrives to let Hutch know what s coming down which understandably doesn't reassure Hutch at all. Cordell, fortunately, isn't what he seems, and it's only with his help that Starsk comes out of this hairy situation alive and in one piece. The fact that he's a gibbering mental wreck is down to the nasty party games of Mr Sutterman. The rest of the story is taken up sith Hutch trying to get his partner back into a state at least resembling normal, and the Feds trying to get Sutterman. S.O.P. But there are a couple of twists in the tale.

The major fault in LRH is not one of technique or characterisation, but of plot. Seeking for a way for Sutterman to break Starsky, the writer came up with some real dillies. But - as in Teri White's S&H classic COPKILLER, she cannot decide which of the scenarios to use, and so slams him (and the reader) with the lot. This strikes me as a little gratuitous, and in fact (for me) rather spoiled the overall effect. Like I was wincing too much to say 'poor lamb.'

The good news is that there is little to fault in the way LRH is written, because it's fluid and pacey. The characters, both primary and secondary, are neatly observed and we11-portrayed. I shall be very interested to see further work from this writer - the potential is promising indeed.

I enjoyed reading the zine, although I found the time sequence difficult to grasp. It didn't quite come across as spreading over two years - although if it had been any shorter it would have been ridiculous. [3]

LRH continues the tradition of lengthy, to-hell-and-back, get-Starsky novels in the same line as Troubled Water, The Mind Enslaver and Sins of the Father. Which is not a complaint, merely a warning that this novel is not for the squeamish or non-h/cers... The story begins with Starsky escorting a prisoner on a plane while Hutch stays home with the flu. It quickly turns out, though, that the pilot of the small plane they're taking is in with Starsky's ruthless prisoner, and the detective soon finds the tables turned on him. Word soon comes back to Hutch that the plane and his partner is missing, sending him frantically searching, while Starsky is the guest of the sadistic Sutterman. By the time Hutch finds him, still early on in the novella, Starsky's mentally shattered and it's possible that not even blondie can put the pieces back together. The novel is definitely a page-turner, and while Starsky is fairly out of is during most of the zine, there's still plenty of h/c scenes to satisfy anyone's cravings. But while the writing is good, one of the major, visible characters is very confusing and contradictory, leaving several plot holes in his wake. A warning also seems in order for the torture sequences which are detailed and brutal, and have very few limits. And with Starsky's loose hold on reality, Hutch becomes the main player in this zine, leaving even their scenes together feeling oddly lopsided. There's very little partnership at work here. But by the end of the novella, the reader feels almost as though they've been through the wringer along with the major character. This is a long road indeed. [5]