Nightlight is a slash Starsky and Hutch anthology edited by April Valentine. Art samples are included on Fanlore with the publisher's permission.

The name of the zine is the alternative title for the episode, "Bust Amboy." 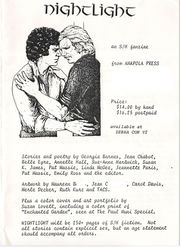 S/H zine now accepting submissions. Planned for summer '86. Seeking stories, vignettes and poetry exploring the S/H relationship as an integral part of the lives and work of Starsky & Hutch. Fiction may be set during or after the series. Looking for stories of the relationship in transition, heavy on characterization and plot, trauma acceptable, but would prefer no death stories. First times are okay, if explored in new ways, new settings, with new catalysts.

The Third Issue That Wasn't

Addiction was *supposed* to go in a zine -- Nightlight 3 -- but [April Valentine] simply didn't get enough other submissions and we both decided not to hold it up anymore. Even the art was originally done for Nightlight 3, and I asked Suzan if I could use it for the story. We never planned it to be a standalone, and I had no idea it would be long enough when I started it. So the fact that it is a standalone is simply circumstances. Likewise Risk originally was in one of the Nightlights, and other novels--stories long enough to be categorized by anyone as novels, not short stories--have been published in many zines and also serialized in zines. I mean it took me just as long to write Addiction whether it showed up in Nightlight or got published by itself. [1] 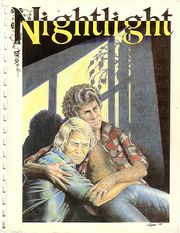 Nightlight 1 was published in July 1986 and has 286 pages. Later published by April Valentine (the name she's requested be used online) as part of her In Person Press. Cover art is by Suzan Lovett. Other artists include Carol Davis, Merle Decker, TACS, Ruth Kurz, Dargelos and Maureen B.

From the editor: "Whether depicting the first time or an ongoing physical relationship, whether showing S&H as lovers before, during or after the series, the fiction in 'Nightlight' keeps a light burning brightly all night long, shining in the window, one that keeps the love light glowing between the partners."

"Nightlight" was gorgeous. Enjoyed almost everything in it... and more importantly, it really puts me in the mood to work with/on STARSKY & HUTCH stories again. Thanks! (Now I really got to make sure C7#4 is spectacular...) [3]

That beautiful Suzan Lovett color cover promises a satisfying zine, and the promise is kept. Even before the zine starts we have a TACS illo and [April Valentine] poem to set the tone, which is consistently wan throughout. CAVIAR - Games are different with different players, and Starsky saves the best for home. MERLIN'S KEEP - So good to see this published at last, especially knowing who inspired the "lady in an Indian-print dress with a miniature dachshund." Lovely reaffirmation of their passion. There IS magic, and in Carol's drawing, too. CAMELOT - This bit of love fits right in here. SOULCRAFT - The image this evokes is breathtaking. KID'S GAME - I love the child-like theme of this vignette -- the gates, the decision of no more games, finding Starsky "running away from him?," "My mother said a policeman would always help me," and after the proposal, hearing the children's voices and his pat-a-cake poem. Jean's illo echoes the love this makes us feel. ONCE BITTEN - The love is always first with these two. And it was clear that Starsky wasn't a home-wrecker — just dealing with a confused and hurting man. SPIDERWALK - Some surprises are wonderful — nothing to fear from this careful snare. HANGED FOR A LAMB - Love the line 'you and who el…uh, scratch that.' Maureen caught the anger in Starsky, and Hutch's quiet support. Yes, almost home. JUDGE NOT - I'm very pleased with the presentation of my story, the illo placement so that holding the between pages it looks as if S&H are looking at each other, but most of all I love the typo on page 43. "They'd settled on Hutch's couch with a couple of bears and stared at each other." Priceless, especially for bear person like me! Appreciate the use of the scales motif, too. MIDNIGHT IN AN ALLEY - The imagery in Jean's poem as usual is awe-inspiring. Her word pictures are wonderful. RISK - The my-partner-is-missing segment of this story is solved pretty early leaving the rest of the story for my-partner-is-hurting. Hutch thinks it through logically, analyzing himself, trying to understand Starsky — all very believable, and we hurt for his suffering. Then the beautiful moment of mutual discovery and the "happy ending" — only it isn't the end, there's a lot more loving and learning, A story to be savored and illos to match. Perfect. GOLDEN MAN - This lover knows his golden man, accepting all that he is. LIFE FORCE - Mutual need, always there. SUZAN's ART PORTFOLIO - Hard to describe in mere words. Sensual, exotic, delicate, and technically marvelous when we can finally control the evoked emotions long enough to notice technique. "Enchanted Garden" is worthy of the extra expense -- delicate color, heavy paper. EMBRACE - A fitting tribute to a beautiful drawing. Utter contentment with one another. ENCHANTED 6ARDEN - A mystical approach to the dreamlike death state - unexpected, believable. A LITTLE LOWER - No latter how unrealistic, a public get-together is a delight to read. PASTORALE - Lovely and loving. LONELY HEARTS - In any universe they belong together, regardless of the "what-ifs." COUGAR - Never alone again. CHRISTMAS EVERY NIGHT - This is cute, in character, and has a great cartoon illo. HUNTINGTON BEACH - I don't know whether to be happy or sad. Life changes us. Nice illo, too. WHITE KNIGHT'S LAMENT and PLEDGE - Painful poetry, depressingly descriptive, but loving. KEEPING SCORE - Loving and giving and going a long way together. Warm and happy. Comfortable. ANGEL FACE - A bit of a shock after the wrath of the previous story, but this is also Hutch. INTERLUDE AT ITASCA - Sometimes the fantasy is all that can keep us sane while waiting. PROTECT AND SERVE - This in depth study of the problems of mid-life adjustment to major changes is both tender and believable. Love the tennis/athletics solution to Hutch's yearning for the old rapport between him and Starsk. They need to be partners. Now I want the story where they do find a partnership job. Martha?? Carol's illos at the beginning of each part are lovely. BRIGHT PROMISE - a perfect poem to follow the commitment celebration of P&S. TOTALLY A GOOD ZINE! [4] 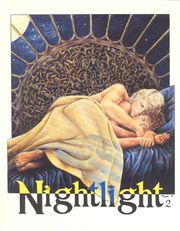 cover of issue 2, by Suzan Lovett -- winner of a Huggy Award in 1993
A submission request:

Nightlight II is in search of high quality "/" fiction illustrating the love between Starsky and Hutch. Stories may be set during the series or range beyond, may be simple relationship stories or include their work as cops. Explore the depth and breadth of their beautiful relationship, the highs and lows and all the moments in between. Contents so far include "The White Feather" by Marion Kelly and "The Proving Time" by Ellen Morris, along with "Separate Lives", the second story in "The Flame" trilogy and sequel to "Guilty Secrets, Guilty Pleasures," by [April Valentine]. Especially needed at this time are medium length stories and vignettes. Please include an appropriately sized SASE with all submissions and send to editor [April Valentine] at the above address. [5]

Nightlight 2 was published in 1991 and has 340 pages. Color cover by Suzan Lovett, other art by Maureen B., SVE, Merle Decker, J. Jones and Chris Soto.

[Written in the Heart]: This is the very first story on her page, and it lists the second story as the sequel, but really every story on the page follows the other, so it is best to read this one first and then the rest in order. This is a post "Sweet Revenge" story that begins with Starsky still in the hospital. When a volunteer comes to read Wuthering Heights to him, he embarks upon an epiphany. (Can you guess what it might be?) There's just something about recovering Starsky that I like. It may be mother hen Hutch! The R rating is for language.[8]

[White Feather]: He recognized the darkness for what it was-if he did nothing, he would die-if he moved, ah, God, if he moved, the pain would give him life. He was so tired…and terribly afraid. Case file, metaphysical exploration, and relationship story all in one, this one's long and involved, and worth every minute. Curl up with a cup of coffee or cider, and pass a cold winter's day lost in its pages.[9]

[The Proving Time]: Oh how I love the Rocky Horror stuff in this story! And I love Starsky's white mesh shirt. And how Hutch watches Frank N. Furter in silhouette go down on Brad, saying, "but isn't it NICE," and thinks of Starsky, with the same wild curls. I'm not too crazy about the childhood trauma stuff the story goes into later, but the grisly murder case is all fascinating, and the original characters all ring true to the time. [10]