Are you looking for Marian Kelly (Man From Uncle) fan writer and fanzine publisher?

Marian Kelly was a well known Starsky & Hutch and Star Trek fan whose fan fiction and art appeared in many fanzines. She was the winner of several Huggy Awards. In 1980, she was the recipient of the ZebraCon fan fund - an effort to raise funds to allow a fan to attend Z-con each year. One of her most well known works is the Starsky & Hutch zine Scales of Justice which has been called the "Holy Grail" of Starsky & Hutch fanzine collectors for its original AU storyline and outstanding calligraphy and art.

In addition to her writing, Marian hosted several panels at fan run conventions, the most notable being one of the earliest Writer's Workshops at Zebracon 1980.

Marian was a frequent contributor to the first Starsky & Hutch letterzine, S and H. On the topic of fans writing slash fiction in Starsky & Hutch fandom (a hot button issue in the early years of the fandom) she had this to say:

Oh, about the S/H debate. Why debate? Write it. Make it as believable as you can, stay true to the characters and let the fans decide whether you've actually done a good job. If the only reason you're writing is to get them in the Torino for a quickie, forget it. That Is Simply K/S in the shuttle all over again. Or the transporter ... or the mess hall... Be original ... make it the elevator at the Bonaventure ... takes only thirty seconds and is made of glass ... might be interesting. [1]

ad in S and H #13, a letterzine raising funds to help fund Marian's trip to Zebracon. The ad reads: "Put the M in Kala 'azoo" referencing the town where Zebracon 1980 would be held

On the topic of fan writing in general, she said:

A writer writes what she hopes is a plausible story, one without desperately contrived situations, one where the heroes and others act rationally, or at least honestly.. If the protagonists don't learn something from their experiences, then the writer has merely been indulging her fantasies, BUT, where in the name of heaven is there something that states we must only write what is either safe or familiar? To explore heretofore unknown situations and make them believable is the mark of a fine writer, yet should anyone discourage an up and coming writer simply because we don't agree with her story content? Let her take the plunge, the reader will have plenty of opportunity to review and criticize — a chastening experience for anyone. Subject matter should be on anything that seems plausible, and can be explored using the only tools a writer has. Her mind, heart and hands. ... It's up to me to make that story enjoyable, believable and beautiful. All writers are driven by that demon "What if?" No plot should be discarded because a writer 1s afraid of fan reaction ... and no fan should be worried about the motives that drive a writer. Ninety-nine per cent of the time writers are not trying to destroy either the characters or their relationship, they are simply expanding or explaining what they see happening. A well written story sates the mind and body and adds to our store of reading material. Surely there is room in fandom for those who attempt something a little different, for those who make us laugh at foibles, and for those whose sheer talent makes us weep. [2] 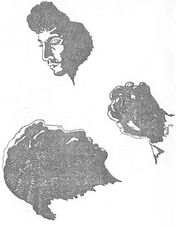 inside art from S and H issue #22 by Katherine Robertson

She was truly an SH founding mother, and a dear friend to me. I will miss her more than I can say. My heart is broken. Marian never had a bad word to say about anyone. She was a fun, happy woman with a delightful sense of humor. Because Anne and I were able to go to VegaSH Con, we were able to spend a delightful day with her and her daughter in their lovely home in California. I will treasure those memories forever. Marian was quick to give her permission to allow us to post her fiction to the archive and thought it was wonderful that new fans were discovering the joys of SH through the internet. [3]

This is such sad news. Marian was one of the "original" SH fans and was a real blessing to the fandom. One of my fondest memories was visiting her with Lucy and being taken on "The Starsky & Hutch Tour," which included Venice Place and Rosey Malone Park. Marian also attended Zebra Con every year. She'll be missed. [4]

Marian Kelly was one of the sweetest, most goodhearted, loving, generous, kind women I've ever met. She was a long time fan who started in Trek and went on to Starsky/Hutch. She was one of the first fans I met when I moved to southern California in the 1980s. She did so very much to make me feel welcome here. She had one of the world’s best smiles. I’ll always treasure my memories of our conversations and visits and the fan parties and smaller get-togethers at her lovely home. She did so much for so many people. Marian loved animals. Her family said donations can be made to the ASPCA or a favorite animal shelter. [5]

Marian was an Original Fan and a force of nature in SH fandom. She was not only a brilliant fanfic writer, but she could *teach* writing as well. She strove for quality and craft, and she urged others to do so as well. And could she tell a story! I'll always remember Marian with a smile on her face and a open arms for friends, old and new.. She was a great help to me as a young writer, and had me in her home several times...I'll miss her desperately. [6]

One ZebraCon, someone (whose name I wish I could remember) [7], brought a multitude of buttons that read, "I am a member of the Marian Kelly Fan Club." We all had a lot of fun wearing them around all weekend, even though Marian blushed and rolled her eyes. I remember being trapped in the elevator with some mundanes who were quizzing me about, "Er... Who IS Marian Kelly?" She's a very well-known writer" (in certain circles <g>). I still have my button. [8]

Marian Kelly was active in fandom for many years, especially in Starsky & Hutch and The Professionals. I met her at one of the first ZebraCons I attended, but she remembered me (wow!) from my days with my Trek filk group, Omicron Ceti III. She was a wonderful writer and all around great lady who never had a bad word to say about anyone. I had the honor of publishing her wonderful story, "White Feather" in my zine, Nightlight 2, which is my all-time favorite of the zines I published. She was very instrumental in helping me learn to self-edit and she did the majority of the editing work on my long S/H novel, "Distant Shores." It was Marion who told me not to reduce the font size to make the zine smaller. It ran 450 pages, but she knew that fans might read it in a couple of sittings and the only thing smaller print would do would make them get eye strain. Plus, as she was in the "older" bracket, she didn't want to have to squint to read it either. Marion was 81 when she passed, one of the few fans literally old enough to be my mother -- and I'm old enough to be mother-age to many of the fans around today. I used to talk to Marian on the phone all the time, even though she lived in...California. The last time I got to see her was a couple of years ago at the final ZebraCon. She was there, as always, laughing and enjoying the fans and I stood near her on stage when the Lifetime Huggy Awards were given out. [9]

Marian has been a part of my life since I was 15 ... That's 35 years and oh man, the stuff we've seen together. We toured Forry Ackerman's house together once. We both wrote and read entries in the S & H Letterzine - and could talk fan fiction like nobody's business, because for Marian? Writing WAS her business - even though she never sold a word of her work. She was active in a writer's group all the time I knew her, and probably a decade before I met her. She wrote well, prolifically and when she wasn't writing, she talked about writing, taught writing...and also taught so many of us how to simply be Good People while we did it. She was the first person I knew with a VCR - and it was a Betamax. She was also the first person I knew who could run up $200 phone bills - not without shame, no - but did it on a regular basis (and this is in 1979 dollars, folks - it was *unheard* of!). I often spent two hours at a time on the phone with Marian - it was EASY. There was always so many interesting things to talk about! She attended more conventions than I'll ever forget, across a broader set of interests and focus than I could ever fathom. [10]