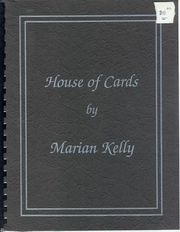 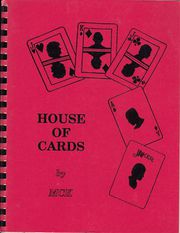 House of Cards is a slash Professionals 215-page novel by MCK made up of two chapters.

It was first published as two circuit stories in 1985 or before.

The first zine was published by Vicki Hauk in 1988. It contains no interior illustration.

In 1991, Lily Fulford issued a reprint with a different cover. It contains art by Maureen B. and Marilyn Cole. Proceeds from the sale went to the Pediatric Aids Foundation. [1] 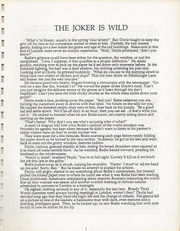 first page of "Joker is Wild," from unknown edition. Page "1" is on the bottom of this page, which would make it, oddly, the first story in a zine. Perhaps when the two stories were printed, the pagination rolled back to the beginning for each one?

ACE OF SPADES, which is not on the circuit but due to come out in a zine, is a superb Bodie story. Not pleasant, but our lad comes out all right in the end. If, like me, you like hurt/comfort this will be an outstanding story. I know, I typed all 117 pages with my own stubby little fingers. The author is working on a sequel, THE JOKER IS WILD, for those of you who like the first yarn. [2]

Both Ace of Spades and The Joker is Wild awe their existence to Vicki Hauk. Until she introduced me to the characters of Bodie and Doyle my interests were firmly entrenched in the far more familiar surroundings of two cops who lived and worked in Los Angeles.

Needless to say, I found the series amply rewarding and the acting superlative. But it was the quality of the fan-generated fiction that caught my Imagination. And quality it remains. The staggering talent of British, Australian, and American writers had produced some of the most enjoyable stories I have ever read. To all those writers I offer my thanks.

There is nothing to be said about my own efforts. They're simply offered to the readers with the fond hope that they will find something of value within. My deepest thanks to Vicki for all her inspiration and support.

Obviously I have believed in the quality behind Ace of Spades and The Joker is Wild from the very beginning. Marian is, in my opinion, being far, far too modest, because frankly it is a hell of a story. It had to be to consume this much of my time and trouble. Consider this publication my gift to fandom and a special thank you to the many hours spent with talented and interesting people 1 would never nave met under ordinary circumstances. The diversity of people involved in this more-than-ordinarily-unusual pastime is a source of neverending delight. The author may wish you to find something of value, it is my a hope you will find something of great entertainment. I doubt my hopes will be unrealized. I would be delighted to hear from anyone who would care to comment. Be aware any comment too derogatory will be ground up and used as garden mulch. Or failing that, send to Oliver North for inclusion in the next Washington "kiss and tell" epic. Seriously, we would welcome all comments.

This enthralling novel by MCK is composed of two novellas: 'Ace of Spades' takes place in a South African prison camp where Bodie is being held until someone back home pays enough to ransom him. While he's waiting, he gets to know his fellow captives, and makes a deal with the devil, the camp warden, to keep a simple-minded prisoner safely out of the warden's claws and away from his voracious sexual appetites. Kept chained, and often drugged, in the warden's house, Bodie is used and raped repeatedly for months, until he is finally ransomed back to England. Determined to put it all behind him, Bodie sets up an appointment with George Cowley, who is starting a new unit called CI5. 'The Joker is Wild' is set several years later, when Bodie, now a senior agent with CI5, must play bodyguard to a visiting South African dignitary who is instantly familiar to him. Doyle, who can't figure out why his partner is suddenly so angry all the time and refuses to be near the dignitary any more than necessary, and never alone, determines that he will find out the truth. Can Bodie open himself up enough to share this part of his shameful, secretive past, even with the man he loves most?

An old but still solid Pros zine about a young Bodie raped and imprisoned in Africa, and an older Bodie who is given the opportunity to revenge himself on his captor. [3]

Oh boy, it's good to read a good story!

I started by rereading "Ace of Spades." I didn't notice the differences, but it read very smoothly and I enjoyed it all over again, all the way through, perhaps more since I knew the outcome. I think this might well be true of "Joker," too, now that the worry about who was going to end up dead is over. Let me say right off that I like the outcome. I had come to like and respect every one of the characters and the ending satisfied me. I'd say more, but don't want to spoil the story for anyone who hasn't read it yet, although I'm probably one of the last.

Some other things I like about "Joker" is that Bodie and Doyle are always, always men of duty, strong men, doing what strong men do. Their love is in no way a weakness, or a letting down of their guard. I admired that all the way through, the fact that they handled their jobs just as they do on the TV screen. Their love does not change the basic men from the ones we see. I read B/D for relationship, and this one feels "right." The story itself was interesting. I got to like that blond with the roses. I especially liked the way the roses threaded their way through the entire story. If it had been illoed, roses would have had to be the theme.

I even like Adoula, or at least understand him a little. It is good that he suffers so over the loss of Bodie. That he most certainly deserved. I like Peter and Kate, and Peter's mother. And the love scene between P/K made them important to me. All the love scenes are good, and that from someone a bit jaded by too many that aren't.

I am angry with Cowley for refusing to talk to that little reporter. It was done with care, but it seems unlikely that Cowley would pass up ANY information. I think he'd have listened the second time.

What I really want to say is that I LIKE THIS STORY. And many, many thanks to both Marian for writing it and Vicki for handling it, so we could have the pleasure of reading something exciting and new. [4]

This has first rate plotting and suspense. Bodie must deal with current menaces, as well as some nightmares from his past. [5]

Bodie in Africa. One long Bodie-bash or rape, beating, raping. S without M (and B without D) is very unsatisfying. [6]

This is a Bodie/Doyle novel brought back into print recently. It is a "must", especially for Bodie fans. It is divided into two parts, ACE OF SPADES and THE JOKER IS WILD. ACE OF SPADES is strictly about Bodie and his experiences as a prisoner in a Congo prison compound tor captured mercenaries. Many PROS stories have been written about "The Game", which has been postulated, by some fans, to have happened while Bodie was in Africa. (The series makes no mention of "The Game".) In this novel, Bodie is definitely the victim, made helpless and vulnerable by the African officer who runs the compound. In the aired series, Bodie's racism has been brought out, (KLANSMEN and INVOLVEMENT). This first section of HOUSE OF CARDS provides a possible explanation for it. This section is grim, yet skillfully understated, focusing on the characters and their development, rather than on explicit violence. The second section takes place many years later, after Bodie has joined CI5 and become partnered with Doyle. Bodie carries the dark secret of the rapes he has endured. The secret is confronted when Bodie's former rapist comes to England as an African diplomatic dignitary, and the pair are assigned to guard him against possible assassination attempts. The rest of the novel deftly combines the "thriller" aspects with both a love-story between the two partners, and Bodie's continuing development of character. I highly recommend this work. (Editor [of On the Double's] note: I think this work won the "Huggy" as best novel at ZCon a few years ago.) [7]

This zine novel realistically portrays what could have happened to Bodie in Africa, then what happens several years later in CI5. Excellent characterization. [8]

For B/D, I wouldn't give the following to a newbie PROS fan because of the above reasons: ... House of Cards (zine contains Ace of Spades and its sequel The Joker is Wild) by Marian Kelly, has some of the most horrific get-Bodie stuff *I've* ever seen and tons of angst. [9]

I don't think Ace of Spades was in Chalk & Cheese, or any other zine I know of. The stories might have been copied for the circuit at a later date, or maybe even appeared in an overseas pub, but both were originally in the zine called House of Cards. Marian Kelly is a really good writer, and I very much enjoyed Ace of Spades despite the brutality of multiple rapes. I think perhaps this story is to be more appreciated by Bodie fen as it is about his time as a merc (no Doyle); I can't remember if Joker is Wild is slash or not, but for some reason I think it must have been--at least that's my perception after years and years. The second story was not nearly as powerful so my memory of it is weaker (at least that's my excuse and I'm sticking with it). [10]