Are you looking for The Professionals archive The Hatstand or the term hatstand? 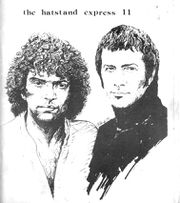 The Hatstand Express and The Hatstand Express Fiction Supplement are two inter-related Professionals slash zines that were published in Australia in the 1980s. The first eight issues were edited by Jill T. With issue #9 in early 1986, the zine switched to an editor in the US - Sarah Leibold.

The name refers to the Pros fandom term hatstand that is a synonym for slash.

From the first issue: "NOTE: The Hatstand is an independent Australian production having -- no connection whatsoever with Blue Jay Press or any of the writers of 'Hatstands' distributed through the (for want of a more precise term) British 'hatstand' network."

The Hatstand Express is a letterzine published in Australia (issues 1-8) and the US (issues 9-). The zine contains both letters of comment along with fan fiction and fanpoetry. Like most letterzines, it also includes newspaper articles about the TV show and the actors. It ran for twenty-three issues starting in 1984. Eventually, a large portion of the fan fiction published in the letterzine became part of the Professionals Circuit Library in the UK and the US.

Around issue #21, the letterzine changed format and became a zine of fiction. From issue #19: "With the shift in format to all fiction beginning shortly, there is a very real need for stories, poems, limericks, etc. for THE. One statement I made in the last editorial that I wish to correct concerns the maximum page count. With the expanded format, THE will be able to accommodate stories up to 50 or so pages single spaced. (In the last issue, I stated the zine would be able to handle stories of that length double spaced.) So please all you fannish writers (and prospective writers), do keep THE in mind for your B/D creations. They will receive a loving home, I guarantee it."

The first few issues of the letterzine carried the following disclaimer: "The Hatstand Express is an independent Australian production, having no connection whatsoever with Blue Jay Press or any of the writers of ‘hatstands’ distributed through the (for want of a better term) British ‘hatstand’ network."

In issue #5, the editor wrote: "I've had it with the disclaimer! You all know this isn't a British zine!"

It is alleged that when the Australian editor of The Hatstand Express put out a flyer advertising her new letterzine, a British fanzine publisher, Blue Jay Press ordered the letterzine editor to stop using the phrase Hatstand in her letterzine, claiming exclusive rights to the word 'hatstand'. Failing that, the editor reportedly stated that she would be instituting an embargo against all Australian fans and no zines or other material would be shipped to Australia. [1]}

From the opening editorial of The Hatstand Express #1:

Sorry to have to open our first issue on such a down note, but I owe each and everyone of you my apologies, especially the Australian fans, who are unfortunate enough to happen to reside in the same country as me.

You see, gentle readers, the powers that be in British fandom have decided that because of my temerity, insolence, whatever, in daring to publish THE, ALL Australian fans (some of whom I've never even met and who don't subscribe to THE) will be cut out of, placed under embargo by, black-banned from, sent to Coventry by, excommunicated from, etc, the British 'hatstand' network in perpetuity.

As most of you will know from my letters, I had absolutely no idea of the British fans' attitude, paranoia, possessiveness (or whatever it is that motivates them) when I started this venture, and I apologise for any hassles any of you may endure as a consequence of my actions.

Not being able to contact all of you before publication, I took the liberty of assigning you pseudonyms until I heard from you personally to the contrary or advising your own choice of pseudonym. Again, I apologise for any confusion or inconvenience this causes, but I felt I couldn't make the choice of placing you in the same position of losing access to British stories.

If any of you wish to withdraw your subscriptions because of the black-ban which threatens any subscriber to THE, please let me know and I will willingly refund your money...

In addition, I have been contacted personally by a representative of Blue Jay Press, the apparent distributor of British 'hatstands', claiming exclusive rights to the word 'hatstand' and requesting I remove it from the title and contents of this letterzine. Without giving you my legal argument chapter and verse, I made reply to the effect that I do not accept their exclusive right to the word and refused to remove it from the title and contents of THE (I just know you would have loved receiving a copy that was heavily scored in the manner of censorship used by the armed forces!)....

I would also be grateful if you would all do me a favor of not showing THE (or telling of its existence) to anyone who is either not already a confirmed B/D fan or who no involvement in another '/' fandom thank you.

As you can see, my already active paranoia has now gone into hyperdrive - please fasten your seatbelts!...... Just call me "U.U." (Universe Usurper)** Alternatively, you can refer to me as "that leprous social pariah"!

It is unclear whether any such embargo was attempted, or, if attempted was successful, but tensions between Australian and UK fans (and in later years UK and American fans) persisted over a wide range of subject matter See the electronic circuit library for more info on the latter.

The End of the Run

The Hatstand Express appears to have ended its eight-year run due to some fairly-common letterzine woes: fewer subscribers, financial problems, fewer letter submissions, the availability of other venues for communication, and the editor and fellow fans' weariness combined with increasingly argumentative letters. A switch in format with #21 may have also been a factor.

In 1987 (issue #14), the editor alerted fans to the decline in subscriptions and the problems the letterzine was facing regarding finances:

... as of right now I am unsure if I will be able to complete a full 6 issue subscription of T.H.E. for this year. The problem is very simple - lack of money. As of this date, I do not have enough funds to publish a full 6 issues. The most that will be possible is certainly 4 issues and possibly 5, but no more. The main problems have been an increase in my costs and a drop in the number of subscribers; our subscription base has dropped substantially... Last year at our peak our subscription base was 99. As of this date, it is 70. Some fluctuation in subscribers is normal as I m well aware. I've published a letterzine in another fandom for a number of years and I realize how readership patterns can vary. However, in this instance, it is not simply or totally a matter of people dropping out of fandom and no longer reading the zine. I am well aware that a number of fans read T.H.E. who do not subscribe to it." Leibold asked fans to lean on others to get their own subs rather than rely on reading borrowed copies.

I have made it a policy in the past to interfer as little as possible with any submissions sent to the letter portion of T.H.E. Beginning with this issue, and from now on, I am announcing a new policy for the letters. While I will continue as much as possible not to make any changes in letters which arrive for publication, I will, when I deem it necessary, edit any submissions which I believe to contain personal attacks on other fans, overly excessive criticism, etc. I will, of course, inform the letter writer of any cuts made in their letters, and I will do my best to leave all submissions untouched. I have received a number of notes from fans voicing concern about what they see as the increasingly personal tone of some comments and criticisms in T.H.E. and this policy is designed to keep discussion at a maximum and personal comments at a minimum. If anyone has any questions or comments about the new policy, please let me know and I'll respond to you as best I can.

[I] want to announce that this is the last issue of THE HATSTAND EXPRESS. I am closing this zine own with the publication of this issue. This decision is one I've given a lot of consideration and thought. I have really enjoyed doing THE and have especially enjoyed the opportunity it has give me to meet so many other fans. However, contributions to the zine have continued to dwindle throughout this past year and many of the functions which it once served in fandom are now also being done by other fanzines." [2]