Hatstand is an expression that was much used during the 1980s by the first group of The Professionals slash fans.

A very early use of the term is on the dedication page of the 1981 zine Remember Angola: "This story is dedicated to all the Hatstanders and for all the people who (like me) said "Never in a million years!" I still think we were right."

One fan said that it originated in use by AN Other with the phrase "Bodie is as gay as a hatstand."

Oh, to clear up further confusion re "Why HATSTAND, for cryin' out loud?' Well, dear heart, it is all my fault. I confess. Once, while watching INVOLVEMENT, I cried, "That's it, Cowley said so! Bodie's as gay as a hatstand!" I think I may have meant to say 'bent,' hatstands to my knowledge having no sexual bias -- but then again, those who know me will also know my predilection for odd metaphors.

From Terri Beckett's July 1985 letter to The Hatstand Express #6:

This term was in fact invented by me, while watching INVOLVEMENT. When Bodie and Cowley are discussing the 'vetting' of Ann Holly, you will remember, Cowley looks at Bodie and says, 'Well, we'll never have this trouble with you, will we?' Or words to that effect. I have witnesses to the fact that I shrieked with mirth and fell about, chortling the immortal phrase, 'That's it, Cowley said so! Bodie's as gay as a hatstand.' Now, I meant to say 'bent,' but I am known for mixing my metaphors, and the rest is history... In short, if anyone has a copyright claim over the term 'hatstand,' it is me. And I grant you full and free use of it for as long as you may wish it. So there.

In 2009, another fan, Sue Jenkins said: "[I am] responsible for Hatstand genre," something that may refer to Hatstand stories rather than the name itself. [1]

The phrase was soon taken up by other fans who coined the expression "a hatstand story" or simply "a hatstand" to refer to a piece of slash fiction about these characters.

One fan speculates: "I have to explain that there was extreme paranoia at the beginning of Professionals fandom (for a variety of reasons) and I think 'Hatstand' was originally used as a way of talking about stories without actually mentioning fan fiction." [2]

The term hatstand appears in zine titles like The Hatstand Express or the name of the Hatstand Archive, an archive of Professionals slash fanfiction and non-fiction resources. The Hatstand archive has a hatstand in its logo and some zines show images of hatstands to signal slash content. 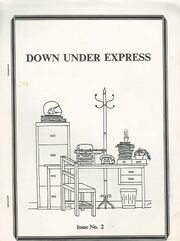 This cover of the Pros slash zine Down Under Express shows an office with a hatstand.

The original group of Hatstanders were identifiable at conventions because they wore identical frog-shaped enamel brooches in a variety of colours, all bought from the same jewelry stall in London. A frog brooch had to be 'earned' by making a contribution to the genre, either by writing a piece of fiction or by typing or otherwise assisting in the production of one. An early controversy in the fandom revolved around who was and who was not 'entitled' to wear a frog.

The term also became the focus of an early struggle between two fanzine publishers. When the Australian editor of The Hatstand Express put out a flyer advertising her new letterzine, a British fanzine publisher, Blue Jay Press ordered the letterzine editor to stop using the phrase Hatstand in her letterzine, claiming exclusive rights to the word 'hatstand'. Failing that, the editor reportedly stated that she would be instituting an embargo against all Australian fans and no zines or other material would be shipped to Australia. The editor of The Hatstand Express wrote in the first issue:

You see, gentle readers, the powers that be in British fandom have decided that because of _my_ temerity, insolence, whatever, in daring to publish THE, _ALL_ Australian fans (some of whom I've never even met and who don't subscribe to THE) will be cut out of, placed under embargo by, black-banned from, sent to Coventry by, excommunicated from, etc, the British 'hatstand' network in perpetuity. In addition, I have been contacted personally by a representative of Blue Jay Press, the apparent distributor of British 'hatstands', claiming exclusive rights to the word 'hatstand' and requesting I remove it from the title and contents of this letterzine. Without giving you my legal argument chapter and verse, I made reply to the effect that I do not accept their exclusive right to the word and refused to remove it from the title and contents of THE (I just know you would have loved receiving a copy that was heavily scored in the manner of censorship used by the armed forces!)....As you can see, my already active paranoia has now gone into hyperdrive - please fasten your seatbelts!...... Just call me "U.U." (Universe Usurper)** Alternatively, you can refer to me as "that leprous social pariah"! </ref>