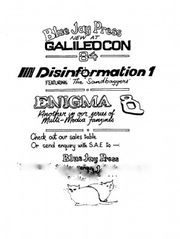 Its primary output was the multifandom genzine Enigma but other titles included Impact (1983 and 1984, Dead Beat (1982) and Disinformation One (1984) which contained the first part of a The Sandbaggers gen story entitled Gods of the Copybook Headings by Sue S. The second part of this story was never completed.