Dead Beat is a gen Professionals digest-sized 56-page zine with two long stories in it, one by Jean Sheward and one by Sue Stuart. 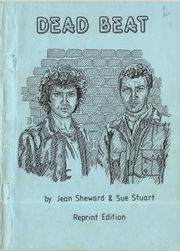 It was originally a circuit story.

Cover by C. Casey. Typing, proofing, graphics and the rest of the artwork by Sue Stuart. Technical information and advice was by K. Casey, Philip Power, Lil Shepherd and Iain Stuart.

The zine's dedication: "'Just a Singer' is dedicated to Shirley, who nagged, to Val and Kate, who were there, and of course to John, who was also there. Twice."

The second story, "Just A Singer" is an early example of a RPF and fandom cross-over mixing the characters Bodie and Doyle with the rock musicians from The Moody Blues.

The zine contains a blurb for the proposed Star Wars zine, Double Vision.

The Original and the Reprint

The original print run was 80 copies. It is unknown how many copies were in the reprint.

Due to circumstances beyond our control (i.e. we dismantled the original paste up) this reprint edition appears under a cover which differs slightly from the one used on the first printing. Reprint rights on all material herein agreed by Jean Sheward, Sue Stuart & C.R. Casey.

From Sue and Pamela:

Welcome to the reprint edition of DEAD BEAT. As we only printed 80 copies of this zine In the first place, we sold out rather quickly but none of us who were involved in the original publication of the zine quite appreciated that DEAD BEAT would still be In demand after the last copy was sold. At first, we thought we could get away with making one-off photocopies for the latecomers, but it soon became obvious that a full-scale reprint wis required. This coincided with a desire to experiment with the A5 zine format and the availability of reduction photocopying and so, hey presto!, we present a reduced-print reprint. We hope you'll find the type legible and not too eye-straining - we think it's turned out rather well.

The only drawback with this method of printing/presentation is that we have had to reorganise the page-numbering slightly. In the original edition of the zine all the artwork was printed single-sided, and the five illoes were not numbered. Shunting everything around as we have has meant that the page-numbering has become a bit eccentric, and even numbers sometimes appear on right-hand pages with odd numbers on the left. This looks a bit sloppy, but shouldn't interfere with your enjoyment of the stories - we hope.

Our particular thanks, in this edition, are due to Jenny and Terry Elson, familiar names to most of you we feel sure, who undertook the photocopying work from our originals. Their service is quick ard very efficient, so if any of you are thinking of producing photocopied zines, newsletters etc, why not send them an SAE for their price list? (see below for address.)

Right, we'll creep away now and leave you to get on with the zine, which we hope you'll enjoy. Of course, LoCs are always welcome - hint, hint!

These two stories are so similar in many ways that they seemed naturally to fit together into a one-off zine - although they are sufficiently unalike to make the zine interesting. The basic premise in both cases was 'getting Doyle and Bodie involved in rock music', but of course the two approaches are vastly different. MIDNIGHT CITY needs no explanation, but there are a few words of background necessary for JUST A SINGER. The story is based on a mixture of real and fictitious characters, which is always something of a gamble. It was sparked off a remark I overhead at a party I attended in late 1980, hosted by The Moody Blues. Another fan was teasing John Lodge about his resemblance to Martin Shaw [the actor who played Doyle]. Up until that point I thought I was the only person who noticed it. However, the story grew out of that remark. I did consider changing the names of the characters, but they are so recognizable it seemed pretty pointless.

The roadies 'Col' and 'Nick' are invented, and have no connection whatever with any roadies who may coincidentally bear those names. The location of the concert towards the end of the story, 'Newcastle St George's Hall' is an amalgam of Bradford St George's Hall, Newcastle City Hall, and the Conway Hall, Red Lion Square, London.

There is no intent to impugn the character of any member of the band, or any member of their staff. The story is pure fiction, for fiction's sake, and I hope it will be taken in the spirit in which it was written.