Discovered on a Rooftop 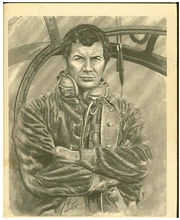 one cover by Pat Cash 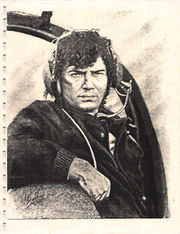 another front cover by Pat Cash

Discovered on a Rooftop was published in August 1985 and is a 248-page slash and gen Professionals anthology.

Some issues had Doyle and some had Bodie on the cover; purchasers were to specify which cover they wanted when they ordered the zine. The covers won a 1986 Huggy Award.

Well, we're finally here. Obviously If you, the reader, are reading this page that means that I, the editor, finally got this bloody 'zine to the printer.

It was a hell of a journey getting there tool But, that's another story. There are tons of thanks I have to give and If I list them all here there d be no pages left for the stories. There are many types of stories In this Issue. Slash stories, straight stories, poems, songs etc. Some of them have been read by members of the "circuit"; If you're on it, you know what I'm talking about and If you're not then you just have more new stories to read about than the rest of us.

There are many, many people to thank for the fact that you have this 'zine In your hands, not the least of which are the 70 or more or you who paid for it in advance and were so very patient as the date of publication kept changing. I would also like to thank Pat Cash for my beautiful covers, TACs for soooooooo much artwork, [Jean C] for giving me her artwork precisely on time and then watching the deadlines change without a complaint, I would like to thank Kat Yount for poetry on demand and Marilyn Pulley who not only gave me poetry on demand but poetry to specific demenslons on demand, to Debbie Ogler for numbering pages (and re-numbering pages above and beyond the call of duty (Debbie put down that whip!)), Robyn, who doesn't even like the Pros for her help and her software, also Kate, Marian, Vickl, Fox, Else, Plash, Gloria, and TJ and many more whom If I keep listing we'll never qet to the end of this page.

I don't really know what else to say In this editorial because I'm writing It at the last minute (as usual) but If I don't get It out of the printer this 'zine Is going to be delayed ONE MORE TIMEI (Ghu Forbid!).

So, I'll try to be scathingly brilliant In the next Issue's editorial (Yes, Virglna, there Is going to be a next issue). It will be called Foxhole in a Graveyard and I'm looking for strange stories, those with a twilight type of a bent to them. Of course not all the stories have to be of the Macabre type but that's what I'm looking for In particular.

See reactions and reviews for The Need.

[zine]: This zine was first published in 1985, and it's a classic. The novella 'Mercs' by the almighty Pam Rose was a joy, with its pursuit of the 'Bodie gets amnesia' plot. There were several other stories, many angsty, some hilarious, that gripped me as well. The story "The Need" by Vicki Hauk was an angsty vampire story that is just too compelling! I didn't want it to end, and hope there's a sequel out there somewhere. A good read.[1]
– Raonaid's Zine Recommendations

A recent zine that everyone should get and read is DISCOVERED ON A ROOFTOP. It's marvelous -- I can't say enough about it. There wasn't one bad story in the lot, and some, like ACE OF SPADES, MERCS, and THE INVENTION OF GUNPOWDER -- were superior. THE NEED was a delightfully erotic, moving "vampire" story -- and ODDS ON was a terrific "sequel" to the "straight" Brian Clemens story of how B&D met. And, the ARTWORK -- suitable for framing, all of it I know a lot of you don't care whether your stories have "pictures" with them, or not, but I shamelessly admit to being a B/D ART JUNKIE. Drool-making! [2]