The Need is a Professionals story by Vicki Hauk.

It is 14 pages long and has art by TACS.

It was published in Discovered on a Rooftop, and it was the winner of a Huggy Award. 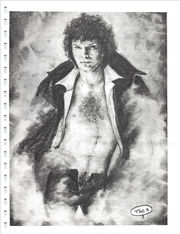 The Author Asked for Feedback

The author wrote in The Hatstand Express #10: "I'd like to ask a favor of all you PROs fans out there. Recently I wrote a story called "The Need" for DISCOVERED ON A ROOFTOP. I have never heard one single word of feedback on the story and I need the comments and suggestions. One thing I have been wondering about is, is there enough interest in a sequel to try my hand at that? If not, how could the original have been improved? This zine is not the forum to stroke my ego (or blast it, as the case may be) so if anyone would care to comment, I have asked the editor to give out my address. All input would be appreciated."

Camille Bacon-Smith printed the the illo for this story by TACS in Enterprising Women, and in 1992, commented on it. Note: italized comments in the brackets are by Shoshanna, the panel moderator, and were added to the transcript later.

What I did when I was working on my book, particularly when I hit slash, was, my field, folklore, is overwhelmingly gay. It's overwhelmingly gay. So this may be one of the few fields in academia where heterosexual people are in the minority. And so it was very easy for me to just go to any number of my classmates and just, cold, slap a fanzine on their desk and say, tell me what you make of this. Generally speaking, the gay men thought it was hysterically funny, and there was this Professionals story called "Masquerade." [It's on the circuit.] When they hit "Masquerade," they would come back to me and they would say, "I've seen it." Not, "I've seen this story," but "I've seen this in real life. I have seen this dance," they would call it, this first-time dance [snipped] I'm looking for a picture here, I can't find it... Because one of the things that--yes, I found it. However, one day... [She is getting ready to hold her book up; laughter.] Now this is not a wildly filthy picture I'm going to open this book up to. However, this picture came in one day and I showed it to one of my friends, and first his mouth dropped open. Then a couple of hours later, we were in the archives, he came back with a friend of his, and said, show him the picture. And his mouth dropped open. Now the thing is, that's the picture. [She holds it up. It's on page 185, for all you folks reading along; it's a TACS portrait of Doyle, shrouded in mist and gazing piercingly out at you, with his shirt and jacket open to show his chest and his trousers unzipped to show pubic hair but no genitalia. It originally appeared in "Discovered in a Graveyard" [1].] Now these are people who had no idea who this person was, but it sort of got them. The gay women that I showed it to had no interest in it at all; they thought that this was totally politically incorrectly stupid. And they basically said, you know, if I want to read men together, I'll read The Deerslayer [2]

The story "The Need" by Vicki Hauk was an angsty vampire story that is just too compelling! I didn't want it to end, and hope there's a sequel out there somewhere. A good read.[3]

...your story, "The Need"--won a Huggy, didn't it! I'm sort of angry that you never received ANY feedback on it, though—when I finished reading DISCOVERED ON A ROOFTOP, over a year ago, the first thing I did was sit down and write a LONG LoC. I thought the zine editors were supposed to pass those comments on to the individual authors? And she obviously didn't, then? If I'd have known that, I would've written to you personally, because "The Need" was one of my favorite stories in that zine. I totally enjoyed the very effective "horrorlike" atmosphere of it, plus which this had to be one of the most unusual "first-time" stories I've ever read! I loved how the grief-stricken Bodie gradually came to the awareness that he'd been in love with Ray; and, of course, when the vampire-Ray first appeared to Bodie, you managed to make that "encounter" chilling and erotic and tender, all at once. I, for one, would love dearly to see a sequel to this one--how DO they tell Cowley, and does he allow them to continue working in CI5 (how would they even manage that, anyway) I'd love to find out!) How would B&D adjust to their new lives? They'd not only have to deal with being new lovers, but also new vampires! What a pain in the neck THAT would be (sorry!). What can I Say?--WRITE THE BLOODY SEQUEL!!! [4]

"The Need" was the first Pros story I ever read. Yes, I still like it. You always have a soft spot for your first. Anyway, I think it's a fascinating idea. I remember those earlier stories(even the ones that weren't so hot) much more clearly than the vast bulk of the stuff I've been reading for the last year or so.[5]