Sheila Willis was a fan writer, a filker, (a member of Technical Difficulties) fan artist and a fanzine publisher. She died in 2013. 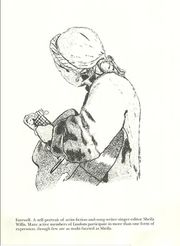 Sheila Willis co-edited 5th Season, a Blake’s 7 fanfic zine, and contributed art to other zines celebrating the tv show, including Southern Seven and Vault of Tomorrow.

Sheila Willis passed away in March from a heart attack. Folks who've been around since the '80s will remember her as the editor of the Blake's 7 'zine Fifth Season, plus a bunch of other 'zines, including a number of Professionals titles. She was also a prolific artist and writer. She was also one-third of the filk trio, Technical Difficulties (with TJ Burnside and Linda Melnick). You'd often see Sheila running around cons in her trademark surgical scrubs. A bundle of energy and a force of nature, Sheila never did anything by halves. She ultimately dropped out of active media fandom involvement. She continued to work as a nurse, most recently as a children's OR nurse. Sheila and I didn't always agree, and sometimes we were in competition, but she was a good-hearted person who lived large, and contributed a lot to our fannish heritage. She will be missed. [2]