Scales of Justice is an 87-page gen novel by Marian Kelly and is considered one of the most beautiful fanzines ever created. The art is by Connie Faddis.

Jan Linder and Connie Faddis finish the last silk screens for the zine, artist is Connie Faddis. This may have been a holiday card sent to fans.

The zine contains dozens of black and white ink drawings, and intricate calligraphy, and several interior silk screens. The color cover was screen printed like other examples of Connie's work, and the zine had a print run of 250 copies. Originals can be distinguished from the reprints by the silkscreened covers and interior silkscreening, as well as different paper/cover stock.

From a flyer (see attached image):

Something is killing people. Some Thing that inflicts bizarre injuries, drives its victims mad, and leaves them on busy streets where they die trying to "get back to kill the dragon." Something very strange is going on in Los Angeles. But after months of convalescence following Gunther's assassination attempt, Starsky doesn't care how strange the case is—he wants back on the streets. Hutch is not so sure his partner is ready to take on a

dragon, but he knows that he is not ready to risk losing Starsky again. When the dragon calls from another dimension,

This zine was originally going to be a single story in Strange Justice, which was published in 1983.

From the editorial of Strange Justice: "One story — Marian Kelly's "Scales of Justice" — was originally slated for this zine, but as it grew into a novella it became apparent that publishing it here was not practical. "Scales" will be published separately — as a lavishly illustrated storybook — later this year by Jan Lindner."

Sampling of the Interior Artwork 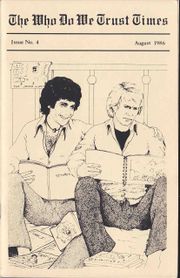 cover of The Who Do We Trust Times, issue #4, Merle Decker -- shows Starsky and Hutch sitting on Hutch's brass bed reading zines, one of which is "Scales of Justice."

This zine deserves more words of praise and analysis than I'll be able to manage. Before reading the story I found myself studying it picture by picture, dragon by dragon, staring in fascination at the changing borders and intricately designed letters, realizing the amount of research that went into the runes, architecture, and adornments. And then I read the story, and found myself again studying each picture, dragon, design, with the added depth of meaning. I've shown the book to art teachers who are as impressed as I with the precise silk-screening and copious detail work. I want to be able to read the runes as Paula did at the Paul Muni Special. It's become a game of 'find the dragon' whenever I show the book to someone new, seeing the creatures in trees as well as the more obvious mists, smoke, and actual places—cufflinks, calendar, carvings (oh, those carvings!), clasps, chalice, architecture, cookware. The moods of the illustrations range from quiet to eerie to overpowering. The overall appearance of the zine is classy and professional, calling for careful handling, so it will be kept in the same plastic envelope as Strange Justice. And then, there's the story. More than a super-natural adventure, this is a loving analysis of Hutch's fears following Starsky's recovery from the James Marshall Gunther attack, and he can't help — that one life above all must be preserved. This is a Hutch story, but we're able to see Starsky's own awareness of his new vulnerability, how his being slower only bothers him in regards to his ability to back Hutch. I was glad finally to find out what had been happening to Starsky while Hutch was 'gone,' and to see that he wasn't ignored, but shown as the viable and actively thinking police detective he still is. His grabbing the puzzle piece once more saves Hutch's life. I LIKE the Vikings! I'm glad Bjorn and Arne survive the battle, and am disappointed that Karsten doesn't, unless the Viking funeral is only a dream both Karsten and Hutch share in their unconscious state, though Hutch seems convinced it's real and mourns the man. The thought that there are more puzzles all over the city leads to the questions, Just this city? Just this time? But that gets into too many paradoxes for my lazy brain, and like Hutch, I just want to think of it as "a story about a Viking named Karsten." [2]

This is the story originally intended for STRANGE JUSTICE - now, with more than thirty pieces of Faddis artwork, including four three-colour silk-screens, it is a classic of its kind. The story is weird and wonderful, and I have no intention of spoiling the surprise by telling you how it is that Hutch encounters a dragon, or what he does about it. Let it suffice that Marian Kelly tells a fast-paced tale, full of mystery and excitement, and never puts a foot wrong - characterisation is exact, research is faultless. You can almost smell the Viking Village, feel the sensations that Hutch/Karsten experiences as he faces what may be the most dangerous encounter of his life. This would be good on its own - allied to the amazing portfolio of artwork, it is a masterpiece. The 'Hutch' of p39; the intricate beauty of p50 and 51, the sword Gramr: pB3, the fireship of Karsten's pyre - it is hard to choose one above others. (And it's fun to play 'spot the dragon' - there's one in every illo!)

Now all I want is for someone to translate the runes for me... [3]

And I never even read the thing, just adored from a distance, lest the treacherous excess from my salivary glands Despoil the Holy of Holies. I'm not into Starsky and Hutch, either, but this truly breathtaking bit of fan pubbing makes the Book of Kells look like a Smurf Connect-the-Dots. [4]

Lavishly and painstakingly researched and illustrated, [this] was a piece of work to rival anything out there, and was finer than a good deal of professional work. This zine was a work of art and a labor of love, and I pity anyone who doesn't own a copy. [5]

This gen AU novel by Marian Kelly, fully and exquisitely illustrated by the incomparable Connie Faddis (and by fully, I mean, like *chockful*, including unique borders for each page, and silkscreened cover & interior pieces in addition to the beautiful pen andink drawings in Connie's gorgeous and very unique style -- if I had to make a comparison, I'd say her work is a bit like illustrator David Palladini -- but Connie's is better). Also the first zine I know of to be laid out horizontally (i.e, 11" x 8.5"). The people who crafted this zine used that space beautifully, with wide, comfortable-to-read columns of text (this is before word processors, folks) illuminated with Connie Faddis' gorgeous Celtic knotwork and Laurie Haldeman's calligraphy. It's not only a breathtaking feast for the eyes, the story's damned good, too. [6]

Mine is 236 of 250, marked as such on the front page... This story is actually quite clever and fun, and had me at the beginning. I love a good mystery, and this blends it well with supernatural elements. Is it AU? Hard to say... S&H are in Bay City in their own time, but things happen. *g* Still, it's a great story in a beautiful package. Each page has calligraphy on it in what I consider a Celtic manner, and almost every page has an illustration. There are a number of the special plates I mentioned that are super cool. You can feel the texture. [7]

It was in a stack I bought from a fan two years ago and I had no idea what to expect. Then I got this beautifully illustrated piece of artwork (I don't know what else to call it). I didn't mind that it was gen, the story was gripping and beautifully written and the illustrations are top notch. Hands down, this has got to be one of the most gorgeous zines I own. And Connie Faddis is just... guh. [8]

There’s a Starsky and Hutch fanzine that was archived in the Fan Culture Preservation Project a while ago, called Scales of Justice. I’ve never even seen Starsky and Hutch, but the zine is full of art and it’s so ridiculously gorgeous that I love it anyway. [9]

Written by the late Marion Kelly and illustrated by Connie Faddis, published by Jan Lindner - Originally intended to be part of Strange Justice, but ultimately published as a stand-alone zine, this is a strong and imaginative tale that never fails to please me when I reread it. And any time we got complacent about Connie Faddis' ability to illustrate, thinking we had seen her best, she'd prove us wrong. This zine is a keeper for artwork alone, including gorgeous silkscreened interior illos and cover, but the story sucks you in as well. [10]

Back in print for the first time in years, this zine is one that not only has an intriguing story but gorgeous artwork on nearly every page. Connie Faddis, an artist who has won many awards, brings to life the words of Marion Kelly, an author whose work has also won awards, and deservedly so! The pairing of beautiful artwork and a fantastic story make this zine one that will stay with you long after you read the last page. In addition to the dozens of detailed black-and-white drawings, Connie's talents shine in a beautiful color cover and two full-page, interior color pieces. These works were originally silkscreened, and have been faithfully rendered in color on creamy ecru cardstock, as is the entire zine. This entire publication is printed on the heavy paper so it will stand the test of time, and can handle being read again and again, which the story will entreat you to do. Set in the months after Starsky has been shot, he and Hutch are back at work for their first days after Starsky has been cleared to return to light desk duty. They are given a case where several people seem to be going insane and committing suicide. This leads the boys to an old Victorian house, where, without warning, Hutch is sucked into another time and Starsky is left behind, anxious and searching for him. Will either of them discover what's happening before it's too late? Don't miss out on this one-of-a-kind zine! [11]