The Phone Booth is a 56-page slash Starsky and Hutch anthology pass-around theme zine. While not dated, it was most likely issued in the early 1980s. All the fiction, poems and cartoons relate to the theme, "phone booth."

One issue suggests the number of originals that were printed; someone handwrote "#9 ... 11 of 15" on one page.

Word Limit: None. Our typist will type as much as you write, provided it's S/H. Location: a public phone booth. Participants: Starsky and/or Hutch. At least the one who gets off must be in the phone booth. Time Limit: 'Your three minutes are up, sir(s)' But you have to do more than just get 'em up in your three minutes. Plot: Only if you insist. Challenge: For the experts among you, make it their first time. Objective: To get 'em off, of course. Plagiarism: Will not be allowed, but for references, see 'Blow Out' with John Travolta. 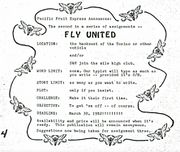 Assignment: Two/Three: '...but Hutch, it's like parting with a member of my family.' 'Love of my life, that rotten tomatoe (sic) gets three gallons to the mile. It's gotta go.' 'I know... but remember the good times? That back seat's seen a lot of action...' 'Yeah, I remember.'" and 'Starsky, we didn't hafta fly all the way to see your mother to join the Mile High Club. We coulda cruised L.A. in a CHP helicopter.' 'Yeah, but Ma always insisted that I do the thing right.' 'In that case, scratch Denver. Getting off on taking off doesn't count.' 'But Hutch...' Your only limitation is your imagination.

See reactions and reviews for Alternate.