All Our World in Us

All Our World in Us is a slash Starsky and Hutch drawer-fic novel by Dargelos.

At one point, "All Our World in Us" was to be the fifth issue of Code 7.

There are two drafts of it, see below. 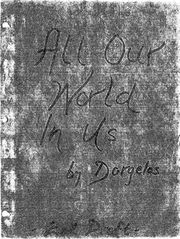 cover of the second draft

The story's title is a poem, "Even So," by Dante Gabriel Rossetti. This poem is used on the single illo by Jean C., see below.

Seemed it so to us
When I was thine and thou wast mine,
And all these things were thus,
But all our world in us?

The Road to "Publication"

This zine is mentioned by the author in an issue of S and H (December 1980). "I'd like to thank everyone who has shown interest in 'All Our World in Us,' and particularly to those who have helped in one way or another. Thank you all. It's going to be as good as I know how to make it."

There is an announcement regarding this zine "S and H" (June 1981): "Due to technical difficulties, Bound in Leather Press regrets to announce the cancellation of Code 7 and All Our World in Us. We will be reimbursing all subscribers to Code 7 over the next few weeks. Our apologies."' This was on the tail of the controversy at the time regarding the publication of slash zines.

In October 1985, the author writes: "The S/H novel ALL OUR WORLD IN US is dead. Call it a mercy killing -- the 3rd draft was not working out at all. The 2 existing drafts will be available to anyone who wishes to read them by the beginning of October -- run like the Lending Library." [1]

In the last issue of Between Friends in very late 1985, there is this announcement: "ALL OUR WORLD IN US, a S/H novel has now been cancelled. However, the first two drafts are available to anyone who wishes to read them. Each is several hundred pages long, and they are quite different from each other. They may be borrowed on a Lending Library basis, for a period of 2 weeks, reimbursing the postage when you return the story. Requests will be handled on a first-come, first-serve basis."

Some versions in circulation are 3-hole punched single sided, around 170 pages.

Well, I promised you a novel...

What you hold is the second draft of ALL OUR WORLD IN US - affectionately known as 'the monster,' or 'that damned story.' Karen and I both felt that an explanation was due to all: of you who have waited so patiently and sent a SASE or two...or half a dozen, so I'm writing this prefact to both editions as a tribute to the patience and tenacity of S/H fans and in the sincere hope that it's the last time I have to write any thing about this damned story ever again!

About 5 years ago I got dragged into S/H fandom and caught the writing disease (non-authors beware - it begins with 'this, great idea for an S/H story' and snowballs into sleepless nights, marathon telephone conferences with your favorite editor and long conversations with you characters). Anyway, I started writing WORLD, and Karen, who didn't know me well at the time, figured I'd grind it out and we could publish it for... what was it? MediaCon '81? '82?

Well I turned out a draft in record time and sent it all over fandom, and it came back dripping several shades of ink. Aargh! So, armed with comments by about half a dozen people, all of whom are, at least, good editors and writers and some of which are superb craftspersons, I ground out draft #2. I was both pleased and disappointed by this version because it. still wasn't the story I wanted to tell, and though it was more polished, more layered, it had lost the energy that was so attractive in the first draft.

Time passed...and I tried to turn out yet a 3rd draft, but my heart wasn't in it. Though I hadn't achieved my ambition (about which, more anon) I felt that I'd already done this plot line to death. I was sick of it. I put it away and tried not to think about it. And while time was passing, Karen (and a number of other people) tried to spark my interest in the project: 'change the title', 'change the structure', 'change the plot line, the characters... will you fergawdssake do something with this manuscript???!'

So I did - I declared it a dead issue. Then we hit upon the idea of making the drafts available to all those people who had waited so patiently for so long. I couldn't, in good conscience, offer either of these as zines since I consider them works in progress; I urge my readers to do the same. Look upon these stories as markers along the path of a writer's education.

I learned a great deal by writing this sucker, and perhaps reading either or both (complete with margin notes - sorry, I'm a compulsive re-writer) will provide an educational, or at least interesting, experience.

A note about Draft #2: By this time, the characters had to the point where they no longer did what I wanted them to do, but blithely led lives of their own. My villain (who was something of a caricature in draft #1) turned out to be a nice guy. Part of the problem in this draft is that I wasn't listening; to my characters. This is a far less successful version of the story for that reason, though there are things in this "draft that are miles better than in #l.

Finally, I'd like to thank all those folks who helped, encouraged, and/or nagged me through one or more drafts: (in no particular order) Diana, Kendra, Connie, Jan, Penny, Carol D., Elaine, Marian, Mel, Joy, Carol H., and, especially, to Karen and Pam who deserve medals for conspicuous bravery under fire, and for midwifing these and many other stories.

Our World and Us [sic]... is excellent, and it's a shame it'll never get finished/printed. Version #1 was especially powerful. [2]