From Fanlore
(Redirected from Gerry Downes')
Jump to: navigation, search

Gerry Downes was an early Star Trek fanzine editor and publisher, and aside from being a prolific creator, is the author of the first standalone K/S fanzine.

At first she was fairly vocal in her disbelief that Kirk and Spock would have a sexual relationship, writing letters to various letterzines stating this thought. Then in 1976, she published Alternative: The Epilog to Orion. That zine is a short presentation in poetry, art, and some prose exploring a slash between Kirk and Spock. The story idea flows from Gerry's gen story "Nebula of Orion", which was published in the first issue of the zine Stardate Unknown. 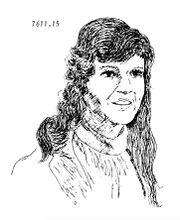 a self-portrait of Gerry, from Stardate: Unknown #2

Gerry was the first recipient of the Trek Fan Fund, sponsored by the letterzine Halkan Council which raised money to pay for transportation and hotel fees to allow fans to attend conventions. She chose to go to Se*KWester*Con.

Her daughter-in-law, Jane of Australia, wrote about her mother-in-law in the essay From Alaska With Love.

Gerry wrote of her experience at SeKWester*Con Too. Among other things, she observed that:

There are a lot of unhappy people in Trek. You can see it in their eyes. They're running from something, or they're running to something, and they're not quite sure they like the person they're traveling with, which is themselves. Not everyone was this way, of course, and those who were varied a great deal in the degree to which they seemed to feel this, but it was there, and I saw it. Many, many people were seeking reinforcement and approval from outside themselves, instead of having it inside where it really counts... I notice all this because I have these same feelings sometimes, too. We all do, sometimes. I just hope we can all give each other enough room, enough SPACE to grow and learn in, so that we don't get those feelings quite so often anymore. [1]

Gerry wrote a personal statement in 1979 saying that real life challenges were causing her to cancel the sixth issue of Stardate: Unknown, and that she "hoped not to leave fandom entirely; there are too many nice people in it for one thing, but of necessity it will be long time before you hear from me again. Don't worry -- I haven't forgotten you." [2]

Gerry wrote a personal statement in 1980 to Universal Translator #1:

As many of you know, 'Stardate: Unknown 6' has been cancelled. The reasons for this are many, having to do with finances, and available time -- and also the sheer physical workload involved. There are several things now I desperately want to do (like write, sail, study) and several things that I desperately need to do (like earn an living) and they cannot be accomplished while I am involved with a fanzine. I still like Trek -- I still like fanzines -- I even still like Starsky & Hutch... but I think it's time to stop now and move on to other things. In a sense, fanzines are a protected little universe where a person can experiment and learn about himself and other people and where a person can attempt to create art in an atmosphere where the audience is predisposed to admire the creation. Since most of us have had our creative impulses stifled early on in life, this nurturing environment is an ideal place to get back into the habit of self-expression, and I think the experience of Star Trek fandom has repaired and strengthened many a battered ego. I know I have gained immeasurably in self-confidence, and while I many have grown this much anyway from the pure passage of time, I will always suspect fandom had a lot to do with it. I now have a novel all my own in my mind and I am very anxious to sit down and [write it]. If I don't set fan writing aside now to write this book, I think I would never forgive myself, and I would also let everyone down who has encouraged me along the way so far. So -- thank you all once again for your support of 'Stardate: Unknown' and Alternative. Don't worry -- we'll all get together over a good book someday soon. [3] 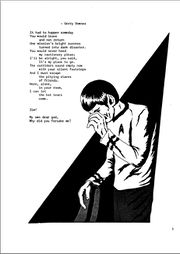 artwork & poem from Mahko Root 2
In her memorial editorial to Gerry, her daughter-in-law Jane of Australia, wrote:

She was the lady who had the courage to look beyond friendship and see love, no matter that the two are both of the same gender. To look into the future and see a time when the personal problems we humans create for ourselves will have been set aside....Gerry's belief was that we will survive as a species. That faith is at the masthead of Star Trek, and echoes throughout the pages of her fanzines. Her writing has a liquid ease that beguiles; but look behind it and glimpse her vision of a future in which humanity survives, but not at the expense of individuals. [4]

Another friend composed this memorial:

Writer, editor, publisher, artist. One of the breakthrough K/S writers, her "Epilogue to Orion" is a classic. Gerry lived way up in Alaska and didn't get "down" very often, but she was an enthusiastic letter writer. She entered fandom adamantly against the idea of K/S, yet quickly changed her mind and became one of its biggest supporters. And not only did she write, and write extremely well, but she could illustrate her own and others' stories. A true Renaissance woman. Cancer took her from us way too early. [5]

From a fan in a letterzine:

I never had the pleasure of meeting Gerry… but I have long honored her for her courage. Imagine what it must have been like in the mid 70s, before our society became even slightly tolerant of homosexuality, to contemplate actually published a K/S zine. Many ideas in K/S that we take for granted were being developed by the courageous and imaginative women who boldly went where their hearts and souls and convictions led them. [6]

A month before her death, a fan on alt.startrek.creative.erotica wrote:

I know Gerry. She lives not that far from

me. I had the pleasure of her company and we talked at length. She's such a mild grandmotherly-looking woman, you would not guess in a million years that she was a pioneer on the sexual frontier in a time when it cost you to do it.

She talked about how hard it was to get things printed and how her manuscripts had to be typed about five times before they were ready to take to the printer. She remembers almost mind melting under the effort of it.

She talked about how printers might not do the job or they would look at her like she was crazy. It was risky then you see, very risky.

She was beta'ing Sentinel writing lately and was very into Starsky and Hutch. She told me she literally wrote herself out with TOS.

Line drawing by Gerry Downes, in the first K/S slash zine, Alternative : Epilog to Orion, 1976
Gerry was a Renaissance woman, pioneer, and dear dear friend. She broke through a lot of barriers in publishing the first zine about the emotional and physical love between Kirk & Spock. We lost her too soon to cancer, 17 years ago this month. But her legacy lives on…[8]