Who's Who in Star Trek Fandom

You may be looking for Who's Who in Star Trek. 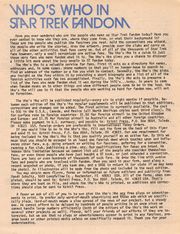 first page of another introduction

Who's Who in Star Trek Fandom is an 18-page zine by Jeff Johnston containing eighty-six fan biographies.

The editor originally intended to publish regular updates and to even include illos made from photos fans sent in ("Already we have artists who have consented to do the illustrations.") but it appears no other editions were ever published.

From a July 1978 comment in Spectrum #38 in : "I want to remind folks that I'm still looking for a co-editor for the Who's Who. I have gotten zero work done on the WW since the year began and I doubt that I'll get it out before 1979 at this rate. Anyone who would like to help: please write in."

From a 1980 ad in Datazine #1: "Who's Who #2 is still up in the air. Still accepting biographies and SASEs for future info, but right now it does not look like it will be published soon."

How and Why Was this Fanwork Created?

The name, and inspiration, came about from a similar publication called "The Who's Who in Science Fiction Fandom," which had been published in the early 60's... The most important thing that Who's Who has to offer is a list of names, addresses and phone numbers (in most cases) for other fans to use as a reference source. If you need the name and address of a fan, you are no longer forced to hunt through stacks of unsorted mail, back issues of fanzines with lettercols or the address book you TRY to keep current... Secondly, the Who's Who will be able to provide other fans with a little bit of biographical data on the people you may know nothing about personally... Another important reason that the Who's Who was established is because in a few years, say fifteen or twenty years hence, this era of fandom will certainly be recognized as an important one. It would be rather sad not to have a list of at least some of the people who made fandom what it was in the seventies.

Have you ever wondered who,are the people who make up Star Trek Fandom today? Have you ever wanted to know who they are, where they come from, or what their background is. These are the people who publish the fanzines you read, hold the conventions you attend, the people who write the stories, draw the artwork, preside over the clubs and carry on all of the other activities that fans carry on. Out of all of the thousands of Star Trek fans however, really a small percentage are active fans. The Who's Who is a guide to just those very fans who make fandom what it is. The Who's Who gives you a chance to discover a little bit more about the busy people in ST fandom today.

The Who's Who is a valuable service for fans. First it acts as a directory for names, addresses and, in some cases, phone numbers so that you'll no longer have to search to find an address of the number or a fan you wish to contact. Secondly, the Who's Who gives you insight on the fans within it by providing a short biography and a list of all of the fannish activities each fan has accomplished.

Finally, the Who's Who acts to preserve a list of the fans who made fandom what it was during the 1970's...today. In years to come when fandom moves on to other things and when different people,come to be in the lead, the Who's Who will see to it that the people who are working so hard for fandom now, will not be forgotten.

Our one requirement for being included in the Who's Who is that you qualify yourself as an active fan. By that we mean that you should be engaged in at least one fannish deed which touches upon and influences other fans, e.g. doing artwork or writing for fanzines, gofering for a convention, running a fan club, publishing a zine, etc. Our qualifications for fanac are broad. We impose this limitation because we cannot list all of the people who consider themselves fans, or even those people who have just bought a ST book, or just attended a convention. There are tens or even hundreds of thousands of such fans. We draw the-line with active fans and people who are involved with fandom. When you send in your form, send along a recent snapshot or photo, if you have one, and a SASE to return it (or state if we may keep the photo). An illustration will be made from the photo and included in the next edition.

A favor we ask of all of you is to not give the Who's Who any free plugs or advertisements in print. We prefer only word-of-mouth advertising and those ads which we specifically place. Word-of-mouth means a slow spread of the news of our project, but a steady . one. We cannot afford to be deluged by hundreds of people writing in at once since we cannot handle large numbers efficiently (both of the editors of the Who's Who work on several other projects as well). Please, tell your friends of our efforts if they are interested, but we ask that no plugs or advertisements appear in print in any fanzines, program books or other printed media unless we specifically request it. Thank you for your understanding. 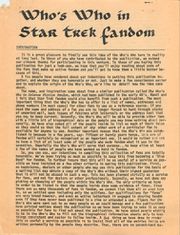 first page of one introduction

The biographies were written by the fans themselves. The questionnaire sent to fans included these queries: 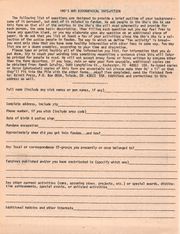 the questionnaire: "The following list of questions are designed to provide a brief outline of your background— some of it personal, but most of it related to fandom. We ask people in the Who's Who to use this form so that all of the entries in the Who's Who will read coherently and provide for each person, the same basic description. When filling each question out you may feel free to leave any question blank, or you may elaborate upon any question on an additional piece of paper. We do ask that you list at least a few of your activities since the Who's Who is a collection of the active people in fandom. The way in which we define "fan activity" is broad— you need only show that you have some healthy interaction with other fans in some way. You may list one or a dozen examples, according to your time and discretion."

Who Was Listed In It?

Who was listed in this publication? "The only criteria we have is that the people inside show some evidence of fanac. Since there are so many thousands of fans in fandom, we cannot list them all or even hope so, so we settled upon only including the actifans. Our qualifications for 'fanac' are very broad however, and even an active letterhack is engaged in shaping fandom even if they have never been published in a zine or attended a con."