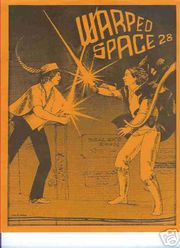 In 1977, she submitted the following bio to Who's Who in Star Trek Fandom.

Anji Valenza aka "You," 'Fang' and "The Tall One,"...Anji entered SF fandom in 1972 and got into STrekdom in 1974 through various friends and conventions and through working on Germaine Best's zine. She is a member of The Alien Inquisition, the NYFed, and the National Fantasy Fan Federation.

Anji has published "Monkey of the Inkpot" and "Universes in SF Vol. 1." She is currently writing and doing illos for several fanzines including Probe, Mindsifter and some N3F publications. Anji's other interests include astronomy, horseback, riding, and lab rats. Her motto is: "Oh, if it were only as simple as that in real life," said by Groucho Marx.

Star Trek Was Simply a Hook; The Author Makes a 1978 Statement

In the zine, Snow on the Moon, the author explains her connection to Star Trek fandom and how it was a planned hook to get readers:

All the stuff which I wrote when I was tirading against the "Prime Directive" and those who "fought to uphold it" — that is, the ST related stuff I'd written, was out.

I no longer want even to remember that I once inserted ST characters into my universe, even though doing this was what made my stuff "salable" to the only people who seemed interested in it at the time, the trekfolk. Not that I'm not grateful that they published it at all; no sir, for unless they did I'd have no reason to be writing this now, for there'd be no anthology; sf fandom does not have an outlet for a new writer who writes long stories. But unfortunately, many people now think I'm an ST writer— PLEEEZ, this is not the case. I was trying to get your attention, folks, and now that I have, he he he, well, welcone to the world of sf for some of you out there, and I have accomplished that which I set out to do.

Zines to Which Valenza Contributed