The Ninth Quadrant is a gen Star Trek: TOS fanzine.

Its spicier sister zine is In a Plain Brown Wrapper.

The Ninth Quadrant 1 was published August 1977 and contains 78 pages.

It included this apology:

The editors apologize for the rather poor printing on some pages. The typist listened to the IBM Salespersons who sold her the special typewriter ribbon and the "Supposed" correcting tape that went with it. Unfortunately, while the ribbon worked quite well, the correcting tape worked not at all... We have tried to correct the most blatant errors to prevent interference with reading, but some may have slipped by. Our next issue will not have this flaw. 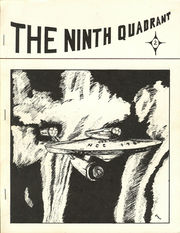 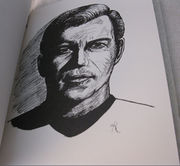 inside art from issue #2, Mary Stacy-MacDonald

The Ninth Quadrant 2 was published in June 1978 and contains 79 pages. 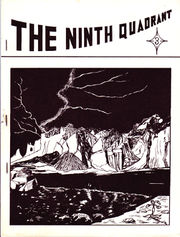 The Ninth Quadrant 3 was published in September 1979 and contains 182 pages.

It was edited by Helen Padgett, Judith Ward, and Lynda Kaye Boots.

Ninth Quadrant is a gen'zine. It contains NO 'Adult' material of any kind. This issue will be published in Late summer '79. It will be printed photo-offset, 8^ x 11 format, and should be between 125-175 pages in length. Reservation fee is 13.00. PLEASE include an SASE for notification of final price and postage. 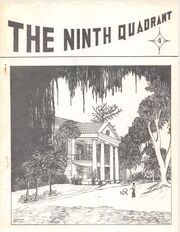 This issue contains 'At Last, Command' -- a two pager about Chekov's first command; cute with some good lines, but the basic idea is not really believable. Fifteen minutes of sitting in the captain's chair does not an officer make. 'Hijacked' -- a genuinely funny and charming tale of a young telepath who ends up accidentally kidnapped by a Vulcan space pirate. Highly enjoyable tongue-in-cheek fluff. 'A Morning with Roddy McDowell' -- 18 pages of a one and a half year old conversation. 'The Lysander Series'(chapters 3 & 4) -- this is an excellent example of why it is generally a bad idea to run multi-part stories. According to the editorial, NQ3 came out nearly three years ago. Therefore, even if you had read chapters 1 & 2, you would almost certainly have forgotten what had gone on in those segments. The parts included here are hard to get into, and frankly, there is little point in doing so, because the section ends without resolution and with no guarantees as to when you'll be able to read more of this unvarnished space opera. 'Rule and Regulations Governing the Condut of Cadets on the Premise [sic] of the Dining Hall' -- despite the fact that this dining hall is a mere concept and not an actual place, this single page is Tigriffin's choice for best of zine award... 'The Menagerie' -- title sounds familiar, doesn't it? One gets the same indefinable sense of deja vu as one proceeds to read the story. Yes, the author spends 90 pages retelling the screenplay with original dialogue, of the entire aired version of the episode by the same name. The few added examinations of viewpoint thrown in in an attempt to legitimatize this blatant rip-ff are not sufficient grounds for either writing or printing a story 99% of fandom could relate in their sleep. Poetry and other features vary widely in quality; some are quite good, some are abysmal. Overall content: averages out to be fair, at best. Art: consistently good, the artist deserved better material to work with. Repro: clean and legible. Value: the good bits, sad to say, would be worth roughly the postage cost of mailing a 178 page zine, which leaves nothing left over for buying it. Not recommended unless you are a BIG fan of Roddy McDowell and/or Pike. [3] 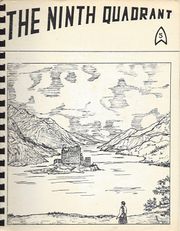 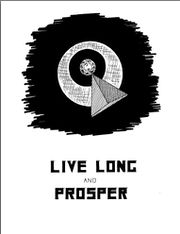 back cover of issue #5, Madeline Rogers

The Ninth Quadrant 5 was published in 1983 and is 118 pages long. The art is by Madeline Rogers, Bonnie Reitz, Mary Bohdanowicz (portfolio), Mary Stacy-MacDonald, Paula Mathai, and Gloria-Ann Rovelstad.

For those of you who egpressed an interest in "The Lysander Series", we regret that the next installment will not be in this issue. Due to circumstances beyond our control, Marjorie Robbins was unable to complete the series. With the inspiration of the Great Bird of the Galaxy to guide us and Marjorie's permission, the editors of THE NINTH QUADRANT will attempt to complete the story from Marjorie's notes at a later date. Hopefully, it will appear in THE NINTH QUADRANT VI." [4] 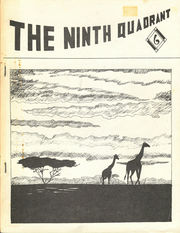 The Ninth Quadrant 6 was published in 1985 and is 151 pages long. Art editor is Madeline Rogers. 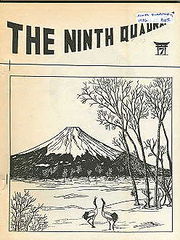 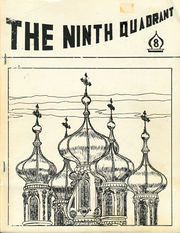 The Ninth Quadrant 8 was published in 1987 and is 159 pages long. Madeline Rogers is the front and back cover artist. Other atwork by Sherlock, Vickie Rizzo, and C.A. Pierce. 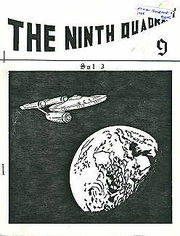 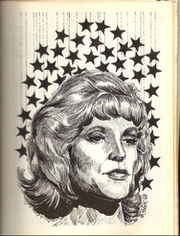 The Ninth Quadrant 9 was published in 1988 and is 115 pages long. Madeline Rogers is the front cover artist. An interior artist is Vel Jaeger.