In a Plain Brown Wrapper

In a Plain Brown Wrapper is a het Star Trek: TOS anthology edited by Helen Padgett. One story is a Man from Atlantis selection. At least one story in issue #2 is slash.

Its tamer sister zine is The Ninth Quadrant. 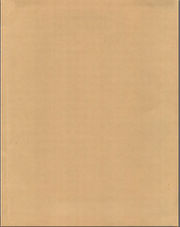 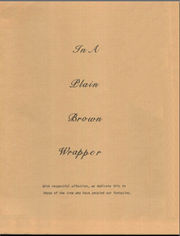 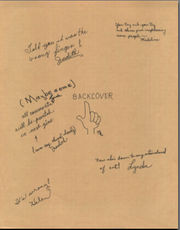 secondary back cover; the actual back cover is completely blank, identical to the front cover

In a Plain Brown Brown Wrapper 1 was published in 1979 and has 142 pages. All art other than in the art portfolio is by Madeline Rogers, however most art, portfolio or not, is uncredited.

It was edited by Helen Padgett, Lynda Kaye Boots and Judith Ward.

One note from the title page: "Due to atmospheric conditions which prevented Mary G. from silk screening the enclosed game, it has been hand water colored by the staff."

A thank you from the editors: "Our thanks to the Physics Department of Trinity University, San Antonio, Texas for allowing this entire zine to be typed on their machine when Lynda ran out of other things to do. They looked at me a bit oddly sometimes, but..." 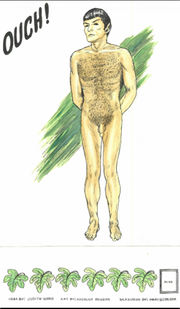 the 'Pin the Fig Leaf on Spock' game

See reactions and reviews for Time of the Hearth.

This is an adult zine which, however, is not particularly explicit in detail. A mixture of K/S sex (two stories) and heterosex; I feel that this mixture may have been a mistake on the part of the editors, but if that was the mixture of submissions they received, and they wanted this zine to be out this year instead of next year, they may have had little option. 'Of Myths and Legends' is about Spock, who, about to enter pon farr, bonds with Christine and they beam down to a planet for the duration of the condition (other writers have also had Spock and his partner do this -- I wonder why? Surely his cabin SHOULD be private enough!) Unfortunately, they are captured by group of Klingons who keep them apart in order to study their reaction -- especially Spock's. When rescue does come, it is apparently too late to save Spock's life. This story depicts Christine as a strong, sensible woman, unlike the dewy-eyed little near-incompetent that many of the scripts portrayed. 'A Matter of Necessity' features Kang, whose mate Kara is posted away, and he needs a woman. There are several Federation prisoners onboard [the ship] and the Human is most suitable for his purposes. The story provides insight into the male Klingon mind in general and Kang's in particular; Kang is a surprising gentle villain, his motives fully understood by the reader so that sympathy tends to be with him rather than his unfortunate victim. 'Dreams' is a post-Paradise Syndrome story. Kirk is afraid to allow himself to love again, and Spock is still d. McCoy persuades them to go on shore leave together, and there Kirk begins getting some unusual dreams... a nice, gently love story, whether you agree with K/Sex or not. 'The Unkindest Cut of All' is told in a series of flashbacks of how Kirk and Spock first reached an understanding, how Spock was kidnapped, biologically examined, mutilated in a way he finds almost impossible to accept, though we don't learn what it is until the very end. I couldn't make up my mind whether this was meant to be satirically humorous or not. If it is, I found it to be in pretty bad taste. Anyway, I have more faith in McCoy's abilities as a doctor than this story shows, if only on the basis of one episode... I also felt that what the author has here are to story outlines loosely linked. WIth a bit more development and a slightly altered end, this could have been an excellent story. Contents also include a Man from Atlantis story; a story that takes place during the events told in Jean Lorrah's 'Time of Mating,' entitled 'Time of the Hearth'; Smile, It Could've Been Worse' -- a pure sexual fantasy, entertaining and enjoyable; 'Another Vulcan Custom,' part one of a serial. The story is good and the reasoning logical and well-presented, but the serial format tends to break the flow of the story and causes a degree of frustration while we wait to discover 'what happens next.' The zine also contains some short items and poetry. Illos are of good quality -- fewer than I've seen in some US zines but we British tend to prefer good story content to artwork and the quality included I find sufficient. My main gripe about the zine is the continual use of 'lay' where 'lie' is the grammatically correct form. This is common throughout fandom, I've noticed, but that doesn't make it easier to accept. Apart from that, I enjoyed the zine, with reservations about only one story. [2] 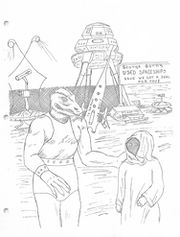 last page, a Gorn and a Jawa broker a deal 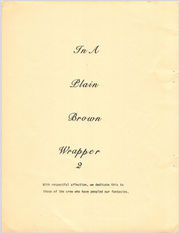 In a Plain Brown Brown Wrapper 2 was published in 1981 and contains 88 pages. Art by the editors, Cruz Vasquez and Carol Hedge (borders).

It was edited by Madeline Rogers and Helen Padgett.