The Man from Atlantis is about an amnesiac human-like man who can live under water. 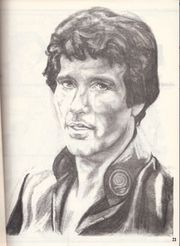 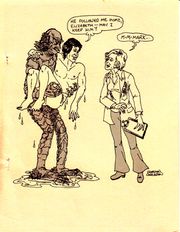 Synopsis: "A mostly-naked man (Patrick Duffy) washes up on shore in California. He's taken to a local hospital but they don't know what to make of him. He has webbed fingers and toes and is dying--until Navy doctor Elizabeth Merrill (Belinda Montgomery) figures out he can breathe underwater. She saves his life, and takes him back to her lab for testing. He appears to have amnesia, and so she calls him "Mark Harris". The Navy conscripts him to help find a missing sub, the SeaQuest, and he discovers it was stolen by Mr Schubert--an insane genius who wants to start World War III to rid the world of people so he can start civilisation anew. Mark foils Schubert's plans, and rescues the scientists and crew Schubert had held prisoner in his underwater lair, and then is free to return to the sea. However, Mark returns to Elizabeth because he's in love with her eager to learn more. Fast-forward one year and Elizabeth has taken Mark (with the Navy's blessing) to the Foundation For Oceanic Research, and together, they fight crime."[1] 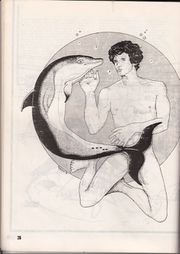 art from Warped Space #37, by Martynn

This is a rare fandom. A few gen multimedia zines include Man from Atlantis fanfiction, among them: