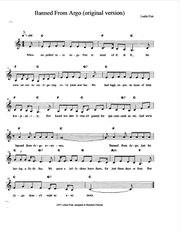 from The Bastard Children of Argo

Banned from Argo is a classic and much riffed-on filk Star Trek: TOS by Leslie Fish.

It won a Pegasus Award in 2003 for Best Classic Filk Song. It also became so popular that Leslie Fish got tired of hearing it.

From the original 1977 description:

Strictly for fun, this is a raunchy, boastful "fo'c'sle" chantey, based on an old ballad tune ("The Boston Burglar"), about the Enterprise crew on shore leave. Written almost overnight (after finding that we were one song short for a full-length album)... [1]

The filk's lyrics are at the OVFF Pegasus Awards.

Riffs, Parodies, and Other Transformative Works

There are MANY versions of the original song for every incarnation of Star Trek, as fans payed homage to the song's popularity.

An early Star Trek parody of the song, with Star Trek specific lyrics, was published in 1980 in Enterprise Incidents #8 in comic book form. Excerpts from the comic can be seen in the gallery below. In 1980, it was also made into a slide show by Kandy Fong, see Banned from Argo.

Fans, often with Fish's knowledge and blessing, created their own versions and adaptations. Many of these parodies were collected in the filk book Bastard Children of Argo.

Two 1988 examples of inspired works are "Peggy Sue is Occupied" ("lyrics for the eighties in the tradition of capitalist realism") and "Banned from Argo," both filks by Susan Kray in Pig Tails & Other Swill.

Different versions of the song have occasionally been used in comedy vids. Two examples are "Have Phaser, Will Travel" (2008) [2] and a version sung by the DeHorn Crew with Leslie Fish for a Torchwood vid. [3]

A fan in 2011 was inspired to write some social commentary based on "Banned from Argo." See tablesaw's filk about Google+ banning pseudonyms: Banned From Google. [4]

Song I'm least proud of: "Banned From Argo", no contest! I wrote it to order, to fill in a four-minute shortage on the master tape when we were recording SOLAR SAILORS, and hoo- boy, do I ever regret it! The damned piece of fluff became damn-near as popular as "Hope Eyrie". It's inspired a horde of filk-variations (which Random Factors has collected into a book, gods help them), got asked for at every con for years until I got so heartily sick of it that I refused to sing it again, and now it's inspiring spin-offs too. Arrrgh! [5]

Well, it all started back in 1977 when my band, The Dehorn Crew (me, Kathy Taylor, Robin Oye, Mary Frohman and sometimes Carol Shuttleworth too) were down in Columbus, Ohio making the master tape of what would later be the album SOLAR SAILORS. We'd just finished recording all the filksongs we'd brought with us (in those days, the recording studio at Ohio State U. didn't have multi-tracking capability; the engineer stuck individual mikes on all of us, but we all did the songs together and hoped to Ghu there were no mistakes) and spent the evening at our producer's -- Steve Reubart's -- house listening to the rough dump of the results. The tape sounded fine, but when we were finished we realized that there was a problem: the album was a wee bit too short. To be specific, we needed another four minutes filled in on one side. Of course, Steve asked: "Hey, Leslie, can't you write just one more song -- about four minutes long?"

Oy. The things I do for Art.

I started writing...and soon realized that I'd need a name for the planet in question. Wrigley's Pleasure Planet was too long a name, didn't scan well, was hard to rhyme -- and besides, sounded too much like the name of a famous chewing gum company. Had to find something better. As I recall, my eye fell on the contents of Steve Reubart's garbage can, in which lay an empty can of corn -- brand name: Argo. I didn't think it likely we'd be discovered -- let alone sued -- by a canned veggie company, so I borrowed the name. The rest came easily.

Robin and Kathy loved the nice catchy tune; it worked well on mandolin and banjo, gave them plenty of opportunity for improvs and vamps. Everybody in general cracked up over the words. We thought it would make a neat filler for that four-minute gap in the recording time.

So, we practiced for the rest of the evening, got minimal sleep, went back to the studio and recorded the song next day. The engineer loved it too. We got it down in four takes, went off to a well-deserved party, then headed home to await the final result. The editing, pressing, duplicating and cover printing went smoothly enough, and we had the finished LP in time for the Xmas rush.

I made a point of hitting every convention I ..ould reach in order to sing at the filks and push the record. Soon enough, word began to spread and sales to pick up. Pretty soon, lots of folks had heard our filks -- and lots of our listeners had picked a favorite song off that album.

Guess which one it was.

For the next few years, thank you, at every con I went to, I got asked to sing "Banned From Argo" -- sometimes two or three times a night.

Soon enough, I got sick to death of singing that bleeping song. I made a general announcement asking the fen to please not ask me to sing it more than once per con. Even that got to be too much, and I asked the fen not to ask me for it at all. That didn't stop other filkers from singing it -- often several times per con -- while I was in earshot, so next I asked that please, nobody sing it while I'm around. Well, the fans complied -- but then, if you please, they started filking it. Yea, verily, they kept their promise and didn't sing that bleeping song in my presence; they'd sing filks on it instead. [6]

I put my favorite filk song, which is “Hope Eyrie,” my tribute to the first moon landing, and when the engineer added up the time [on the preliminary recording]. Remember, you had to have enough music to fill two sides of a record. He said, “We’re 11 minutes short. Can you come up with another song?” So, I thought fast. I had written a song for just about every crew member and major event. What’s left? Well, do a funny song that lists the whole [unclear]. I had written “Banned from Argo” in a couple of hours. We sang it the next day. It was purely a filler. I thought it would be forgotten, and oh no. (laughs) “Hope Eyrie” could be my most famous filk song or folk song, but “Banned from Argo” was the second most. Arrrgh! Such is fame.

[Why do I think "Banned from Argo" appeals to people?] Well, first, it’s funny. It’s more than slightly dirty, and it paints a lot of [un?]flattering portraits of all of their favorite characters. [7]

These are only the ORIGINAL verses. There about about 500 KNOWN verses now. You might be shot for uttering the words "Banned from" when it's your turn to pick songs at a filksing. They will kill you RAPIDLY, so that you're not able to get the whole title out as an official request. Even dead, your choice still applies . . . [9]