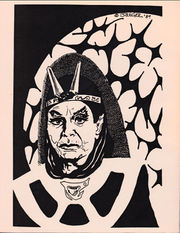 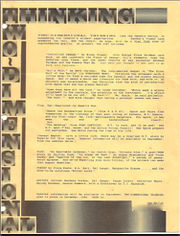 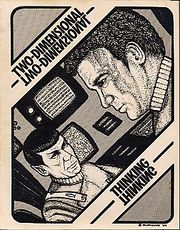 Two-Dimensional Thinking' cordially invites you to boldly submit where no (wo)man has submitted before. No, it's not S&M; it's a new zine, its less-than-five-year mission to seek out new Trekfic, new art forms, new ways of belaboring a cliche. 'Und you vill submit, or else!' [1]

interior illo by Bjo Trimble, a comment on Banned from Argo

See reactions and reviews for Where the Bookberries Bloom.

[zine]: To my mind, however, the best fanzine of the year was Two Dimensional Thinking, edited by Lee Heller... This fanzine ran 230 pages and was perfect bound. To produce this volume, Lee wrote all of her favorite fanzine authors, asking them to contribute something. The result was the best fanzine since Dagger of the Mind, and I thought that both Dagger of the Mind and Two Dimensional Thinking were the best Star Trek fanzines since Interphase. Unfortunately, the editors of all three fanzines never issued another Star Trek fanzine. [3]

[zine]: TWO-DIMENSIONAL THINKING is the best fanzine I've seen in some time. This will be on my mind as a Fan Q nominee for 1985, in the fanzine category, and in the artwork category for Suzan Lovett in particular (though there is other good artwork here as well). There is no age statement on this fanzine, though with mature language, mature situations, and 'suggestive artwork, it might well have had one. Two other minor problems I had were with the single quotations (the left one horizontal, the right one vertical), and the tendency of some authors to abbreviate "Starfleet" as "'fleet" (since it was never done in the series, why do it In a story?). The strongest stories in this fanzine are the comedies. I've noticed in recent years that stories which emphasize comedy also have some of the most accurate characterizations. "Controlled Damage: A Tale of Feldman" by Mindy Glazer details Feldman's first days on the ENTERPRISE. It is written in the style of the Feldman novels. "Some Guys Have All the Luck" by Lynda Carraher features a soap-opera addict whose hobby has an unexpected effect on an alien culture. "Three with W. T." by Rayelle Roe are stories about an isolated farmer who has extraordinary run-ins with the ENTERPRISE crew. "Fourteen In, Seventeen Out" by Collette Mak is about the ship's laundry officer—the numbers refer to socks—and efforts by Spock to get a full accounting of his laundry. All of these feature excellent comedy writing. The three alternate universe stories are also quite good. "The Journal" by Joan G. Ryan finds Kirk and Spock and McCoy at Kirk's boyhood home. Here, Kirk's mother died before he entered Starfleet academy, and a journal provides insight into the mother's character. "All's Fair" finds Spock married to Christine. Spock has an injury requiring extensive therapy, and in the recovery process, the two work out their feelings for each other. "Echo from a Different Voice" by DaraLyn Archer supposes that Janice Lester was killed while in Kirk's body. How Kirk, in a woman's body, must re-establish himself as commander of the ENTERPRISE. There are two well-written short dramas: "In Sleep Wo Meet" by CinDe Deren and Diane Miskiewicz describes three dreams. One is Kirk's, one is Spock's, one is McCoy's, and it is not certain which dream belongs to which man. "Private Sina" by Shirley Sipe takes place after ST II and is by Shirley Sipe takes place after ST II and is compatible with ST III. Here, Kirk is concerned about McCoy's behavior. Finally, there are two romances. "Don't Deny the Miracle" by Susan Murray and "Here as on a Darkling Plain" by Lee Heller have some elements in common. The heroine has fantastic powers, the heroine has Kirk as a lover, all the rest of the crew love and admire the heroine, and the heroine suffers a lot. I found these two stories the weakest ones in the fanzine; admittedly, that is a reflection of my personal taste. Overall, TWO DIMENSIONAL THINKING is excellent. I recommend it highly. [4]