Rec-Room Rhymes is a gen Star Trek: TOS and multifandom anthology of filks mostly by Roberta Rogow. There are 16 issues, plus three omnibuses and a "Best Of."

The music CD of these songs are in Alive and Filking.

From "Some Words About Filk-Songs": "Part of the fun of being a Fan is getting into things like "filk-songs". Several years ago, someone printed up a song-sheet with the words to some of these insane parodies and through an inspired slip of the typewriter came up with filk-songs instead of folk-songs. The name has come to mean parodies or even original songs on a Star Trek or Science Fiction topic... There are talented people like [April Valentine] and Carolyn Venino and Leslie Fish who can make up their own tunes. I tend to borrow mine, from all sorts of likely and unlikely places. This makes for copywrite difficulties, which is one reason I have not recorded any of these songs. It is also why I have not included the music for any of them. I have given you the source and the guitar chords. You'll just have to take it from there yourselves. People ask me how I write a filk-song. I usually pick my music first, and I try to select the music to the character or theme. Then I go with the original rhyme scheme — and I play with the words until I get them to fit what I want to S8y. Most of the time it comes out funny -- with one or two exceptions. The artists who illustrated these songs did so under extreme pressure, since I decided to get this book ready at almost the eleventh hour. I thank everyone of them for getting the art to me under the gun, as it were." 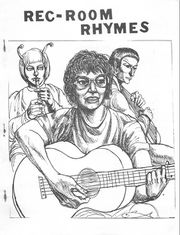 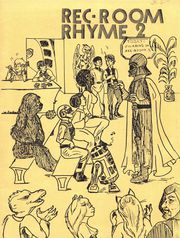 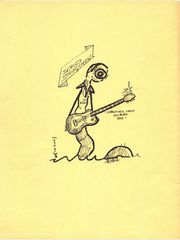 Most of these filks are to tunes that are familiar, I admit to having a love of the exotic that leads to strange paths, filk-wise. The "verse" to "Bye,bye Blackbirds", for instance, or the lead-in to "T'm L ooklng Over,,," are not so well-known as the rest of the song. As for the "Indian Song" that I used for Jawas, I picked that up In Scout Camp 25 years-ago, so It must be In some little hymnal handed out to Girl Scout leaders, A few of the others are under copywrite — In the case of "Yarushalaylm Shel Zachav/Jerusalem the Gold" It's an Israeli copywrite, and I do not care to mess with them!

So I am not including music in this collection. If you cannot find the tunes on your own, I might be able to record them for anyone who wants to send me a tape — and there are a lot of people who sit there with their little recorders going at filksings, taking down every time T miss a chord or forget a word!

couple that were so topical that it would take a page of footnotes to explain them (and even then, you had to be there to find them funny). There are a few filks that I sing that aren't in here because someone else wrote them! And theme are plenty of filks yet to be written.

The editor states: "Stolen from the best!" 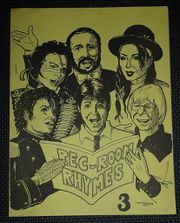 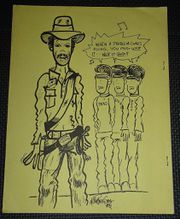 back cover of issue #3, Michael B. Smith

The lyricist is Rogow unless otherwise noted:

Rec-Room Rhymes 4 was published in 1986. It contains, among other things, Star Trek and Star Wars filks by Baker, C.J. Cherryh, Fine, Puhl, Rogow, and Rosenthal. Art by Eggleton, Martynn, Rosenthal, TACS and others.

The lyricist is Rogow unless otherwise noted: 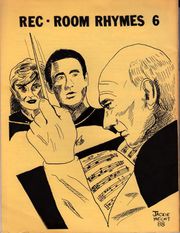 back of issue #6, Jackie Hecht 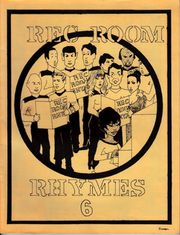 The lyricist is Roberta Rogow unless otherwise noted:

Rec-Room Rhymes 8 was published in 1991. It has filks by Rogow and others. Art by Roberta Rogow, Jane Sibley, Michael E. Smith, Kate Landis, Gennie Summers, and Patricia Young.

Rec-Room Rhymes 9 was published in 1992. It has filks by Rogow and others. Art by Mary Chmielnewski, Kate Landis, "Mildrew", Barbara Stulz, Gennie Summer, and Pat Young. 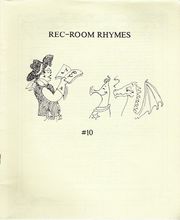 Rec-Room Rhymes 11 was published in 1994 and contains 42 pages of filks by Rogow and others. Art by Jane Sibley, Jean Ellenbacher, Elizabeth Mihaltse, W.C. Pope, and Aaron Stevenson. 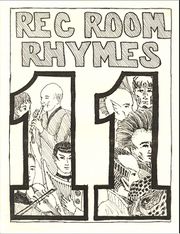 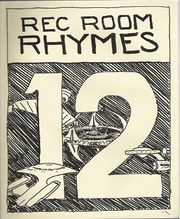 Rec-Room Rhymes 14 was published in 1997. Filks by Rogow and others. Art by Rogow, Jane Sibley, Michael Cole, Kate Landis.

Rec-Room Rhymes 15 was published in 2005. All filks are by Rogow and illustrated by Rogow, Jane Sibley and Valmark Valle.

Rec-Room Rhymes 16 was published in 2007. Filks are by mostly by Rogow plus one each by David Weingart and Gary McGath. Art by Roberta Rogow, Jane Sibley, Marie Williams and Jean Ellenbacher.

Best of Rogow's Rec-Room Rhymes was published in 2002. It is a compilation of filks previously published by Roberta Rogow. It is illustrated by Jane Sibley, Jean Ellenbacher, Melody Rondeau and Carol Swoboda.