Odo is a major character in Star Trek: Deep Space Nine, played by Rene Auberjonois. A member of the Changeling race originally from the Gamma Quadrant, with the ability to shapeshift, he has Bajoran nationality. He is the Head of Security on Deep Space Nine, and served in the same role when the station was under Cardassian command.

Odo is a popular character with fans. In a 1995 poll including all Trek characters, he was the second highest ranked DS9 character, after Julian Bashir, and one of only three DS9 characters to reach the top ten, coming in at number nine.[1] Many fans see a dichotomy between Odo's hardboiled exterior and his inner softy. OdoGoddess explains:

[A]s I watched "A Man Alone", and heard Odo admitting to Quark that he didn't understand the humanoid need to couple, followed by his dismissive cautionary tale on the compromises people in relationships need to make -- I was caught. / A lot of fans chose to take what he said at face value, that he was this alien who didn't understand humanoid behavior. However... I just *knew* that Odo wasn't grousing -- he was *lonely*. I could relate to that. And with each passing week and episode, I became more and more fond of that blue-eyed, gruff-mannered, but soft-hearted constable.[2] 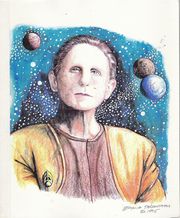 Although the character has a loyal following, fanfiction centred on Odo is rarer than for some other DS9 characters. As in canon, he is often paired with Kira, which can lead to angst potential when his feelings aren't returned. Slash pairings are rarer, with the predominant one perhaps being Odo/Quark. Erotica often imagines how Odo's shapeshifting skills might be put to good use in the bedroom.

Gen fanfiction also frequently explores the otherness of being a shapeshifter in a world of solids, or describes the Great Link on the Changeling home world. There are also many gen stories in the detective genre, sometimes set pre-series on the Cardassian station. Between his old guilt at his passivity during the Cardassian occupation and his new guilt about being a member of an Evil Race, there's plenty of potential to crank up the angst-meter. 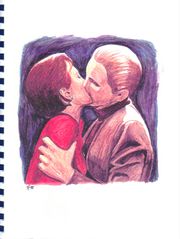 The archive Odo's PADD is dedicated to Odo and the Odo/Kira pairing. Fanfiction centering on the character can also be found at Archive of Our Own, Bajorarama, fanfiction.net and the Trekiverse archives, and at the Constable-Mine mailing list.