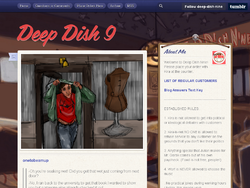 A screencap of the Deep Dish 9 tumblr, captured July 2020.

The trope originated on tumblr as part of the second wave of fandom from after the series aired. The tumblr blogs Deep Dish 9 and Deep Dish Nine Archive contain most of the content for this trope. The origin appears to be a tumblr post by LadyYateXel where she posted screencaps of DS9 characters with the caption, "They all look like pizza delivery people. And I love them so much."[1][2]

Deep Dish Nine has developed its own fanon to incorporate the themes of the series into a wildly different setting. Although the setting is 21st century Earth, some fan writers choose to reinterpret the political boundaries so that Bajor and Cardassia are countries on Earth instead of different planets. Others choose to write the various species as ethnic groups or members of rival organizations. The Dominion is often reinterpreted as a rival restaurant. Some fans like to incorporate in elements of other Star Trek series - sometimes Kathryn Janeway owns a coffee shop or Picard and Q cross paths. The topic of what sort of vehicles are an appropriate subsitute for canon ships like the Defiant is also frequently discussed.

Some characters have fairly consistent roles throughout interpretations. Julian Bashir is a medical student, usually working part time at the Deep Dish Nine pizzeria. The genetic enhancement plotline is adapted for a contemporary setting in multiple ways; kittyknowsthings writes an autistic Bashir who was forced into abusive ABA therapy as a child. Tinsnip describes her interpretation:

"So there isn’t any gengineering. But there are overachievers, and there are helicopter parents, and parents who live vicariously through their kids. Julian’s dad is kind of a fuckup, even in this world [...] But by God, when he and Amsha had a kid, this was his chance to do something amazing, his kid was gonna set the world on fire -

And Julian really wasn’t much good at anything, just this very cute but very goofy little toddler, clumsy, slow speaker, very loving but not good for anything."[3]

Odo is usually imagined as either a police officer or a security guard. It's common to have stories or fanart where Gul Dukat is reimagined as an annoying customer who harasses Kira Nerys. When Quark is included, he still owns a nearby bar.

Other characters have more variance in the roles they play. Kasidy Yates rarely features in fanfiction, but Vyc portrays her as a long-haul trucker instead of a 24th century freighter captain. The semi-official rules of the AU as outlined by the primary tumblr account erase all canon character deaths, which means fans often refer to Jadzia Dax and Ezri Dax as sisters. The nature of the Trill species is less consistently interpreted, with some writing Trills as a cultural or religious group. Kira Nerys's history in the Bajoran resistance is interpreted in multiple ways. Some fanwriters take the no deaths rule as an opportunity to write about less popular and even one-off characters like Tora Ziyal, Weyoun 6, and the baby changeling.

"Other fandoms think they go insane when shows finish up, but Deep Space Nine has gone so long without canon material that when someone went, “Guys. Pizza au tho”, everyone else went, 'Yep. That makes sense. Let’s do that.'"[4]
A comment by asdfghhjjj12 with over 600 notes on tumblr 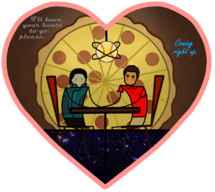 A DD9 Garak/Bashir valentine, posted to the Deep Dish 9 tumblr by the mod.