You may be looking for The Dark Lord, the highly controversial Star Wars zine published in Sweden. 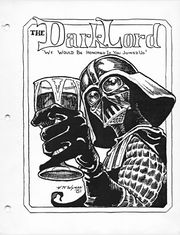 From an ad in Warped Space #46: "Though the 'zine honours a certain Lord of the Sith, it hopes to present equal emphasis on all characters in the SW saga."

I was determined not to do this: greet a lot of people I don't know and a lot of people I do know—all of which are probably not interested in the agonies and ecstasies of publishing their very own, just add pen, pencil and poison fanzine, but here I am—greeting you to say Welcome! and thank you for your interest in DARKLORD.

This zine is a sparkling, magical miracle baby. In May of 1981 Vicki gave me permission to print THE GREY LORD SERIES. Up until then I had been mentally toying with the idea of publishing a zine, but didn't much relish the thought of having to write the material myself. I wanted to play editor. Also, I'm no artist, and another paranoia was visions of a ton of manuscript with no illustrations. Vicki did her own illos, and amazingly enough two other artists—both excellent—found me and made my job much easier.

This premiere issue of DARKLORD is dedicated to V.M. Wyman, as it was in the beginning. I think you'll know why everything grew up round her work when you read Prologue and Intrusion Into Private Space. This lady has an excellent reputation as an artist. Once THE GREY LORD SERIES is read, her reputation as a writer is assured. Her grasp of characterization is astonishing, and her abilities exceptional. The name of Stefanie Hawks will be known to many of you in connection with both Doctor Who and Star Trek fandom. This artist literally offered her impressive services to me, pushed back her own deadlines, and offered such cooperation as I have never seen, Lucinda C. Brown and Nancy A. Stasulis came to me originally together, working as author and artist hand-in-glove. This issue they are featured separately; hopefully in issues to come they will have joint ventures.

Now, the thank yous; first to Carolyn G. Lynn, for hours at a word processor. I hope, my dear friend, the hours weren't ill-spent. I hope, too, you are happy with the end result? You'd best be. To Vicki Wyman, for a year of patience in seeing her 'spruce goose' to flight. Do I still have printer's rights? To Nick: my thanks are boundless. You made the financial burden much lighter, as well as giving support. To Larry, for the kind heart and the helping hand—and a shoulder to grouse on when the future was dark. And to you, the reader, for wanting to share a very special zine with us.

DARKLORD is a labour of love carrying the title—royal or otherwise— of a rather unlovable villain. Without a bad guy, who could ever be good? Welcome to his world. Enter freely, and of your own will. And yes, Virginia, there is a Darth Vader. . .

A second issue of "Dark Lord" was proposed in an ad in Scoundrel #3 and Kessel Run #4. It was to have had a publication date of "winter '84 (officially MediaWest*Con '85)" and was to have included content by Roberta Rogow, Wilson, Carol Hines-Stroede, V.M. Wyman, Marcia Brin, Wanda Lybarger, Paula Block, and others. This second issue did not make it off the ground.

It is not often that art alone can carry a zine, but when a friend of mine loaned me a copy of THE DARKLORD, I whipped out my checkbook and sent off for my own copy before even reading the stories. The illos, by Nancy Stasulis, Stefanie Hawks, and most especially by Vicki Wyman, are nothing less than outstanding, and the excellent reproduction does them full justice. Wyman's likenesses of the main STAR WARS characters are more interpretive than literal, and if you are looking for portraits of Han, Luke, and Leia, you won't find them here. But her lovely style with its emotional (though not technical) echoes of Rackham, an enchanting and fantastic faerie charm. In particular, her illos of Vader, with their swirling Art Nouveau drapery and backgrounds, turn him into the magical Dark Prince of a nineteenth century fairy tale. When I got to them, the stories proved somewhat less successful than the art. "The Meeting" by Melva Gifford and "Once Upon A Friday Night" by Cynthia Lorain are a couple of cutesy muppets-meet-Yoda vignettes, while "Epilogue" by Arthur Lockwood is a similarly cutesy rerun of misplaced lines of dialogue from TESB.

"The Hour of His Glory" by Rebecca Bernard managed the unusual trick of making a unique and potentially fascinating concept totally boring for pages on end. Here Vader is confined by the Emperor with a mindwiped Luke. In the process of restoring Luke to sanity, the two come to love each other genuinely as father and son, so that Vader sacrifices himself for Luke in the final confrontation with the Emperor. The characterization and the psychological process involved are remarkably well-done and believable, although the trudging detail in which they are described makes the story sound like a clinical report on an experimental subject. This is strictly an "idea" story, but it is well worth reading for that alone.

On the other hand, the plot of V.M. Wyman's "Grey Lord" series is less convincing. If you had no problem with the angels in the lurex caftans who rescued Starbuck in BATTLESTAR GALACTICA, you may well have no trouble with Han falling into an interdimensional limbo between hyper and realspace, where he is rescued from carbon-freeze by Anubis and an intelligent star, who then goes to bed with him. Oh well; we've had Jungian archetypes, Celtic Sidhe; and Arthurian folkheroes in SWARS fanfiction--why not an Egyptian god? Once this initial difficulty is overcome, the reader will notice the story's unusually literature, enjoyable style and general readability. For the most part, the characters are solid, and the movie characters sound,not only like themselves, but like realistic, adult human beings as well. I will certainly be looking forward to more episodes in this series.

The rest of the zine consists primarily of typically fannish poetry--i.e. explorations of relatively obvious ideas in relatively uninspired blank verse. Unfortunately, most fannish versifiers--and fannish editors--do not seem to have grasped that, while conventional concepts can often be rescued by clever use of metre or other poetic technique, blank verse is not simply prose chopped into unequal lengths, but requires some originality of concept or language to become real poetry. None of the leaden-footed examples in this issue achieves such originality, although they all make a respectable attempt. In fact, the whole of THE DARKLORD's fiction can be described as a thoroughly respectable effort, which, while it does not reach the heights of first-rank fan writing, definitely avoids the more common blunders and ineptitudes of bad fan writing as well. Every piece in the zine is worth reading for at least one reason or another, and there are not too many zines of which that can be said, after all. THE DARKLORD is well worth the price. [1]