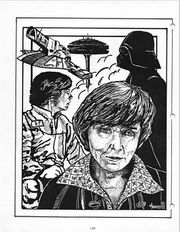 from The Dark Lord (1982), artist is Stefanie Hawks

Born Beru Whitesun, Beru Lars was Luke Skywalker's aunt and lived on her husband Owen Lars on their Moisture Farm on Tatooine.

She encouraged Luke to go to the Jedi Academy, in contrast to Uncle Owen.

Beru and Owen were murdered by Imperial Stormtroopers who were searching for droids who had the plans for the Death Star.

She appeared in A New Hope, Episode II Attack of the Clones and Episode III Revenge of the Sith.,[1] with Bonnie Piesse playing the role in the prequels.

Beru appears infrequently in Star Wars fan works, and is usually included in a supporting role in Luke Skywalker-centric works.