Are you looking for the Star Trek: TOS fanzine Pastaklan Vesla?

Pastak is a gen Star Trek: TOS anthology that contains Vulcan fiction, poetry and art. The first two issues were called Pastaklan Shaturas, which is why "Pastak" begins with issue #3. 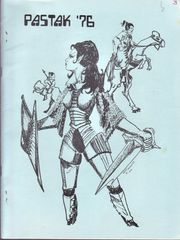 Pastak 4 was published in January 1978 and contains 81 pages. 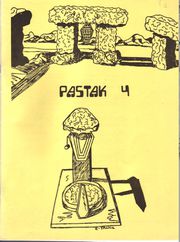 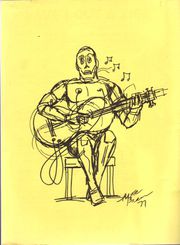 back cover of issue #4, Mike Brown

An interesting zine, one I'd rate as good but not great. The material varies with top billing going to Johanna Cantor and David Lamazoff's 'The Explorer,' a 22-page tale of the E [Enterprise] with a -- well, hitchhiker, sort of, the dialog and characterizations seem very real. Also, 'Mind of Ozoor,' a K/S friendship-not-relationship tale a la Contact from [April Valentine]. It's well-written, if not entirely unique. A short '...and After' is a one-page 'after-the-death-of-Amanda' story from Carolyn -- it's good and not overly sentimental, and accompanied by a lovely Jacobsen illo; 'For Words Never Spoken' is a sentimental, but I liked it, to pager about Spock after Kirk dies; 'Great Expectations' by Lee Jaecks -- I don't want to reveal the, er, plot of this short, but it earned a good laugh; chapter tree of 'Victories of the Victor' (Vulcan history); there are several poems, my favorites being 'Song of a Silver Bird' and 'Facades,' both by Sarah Leibold. Illos range from mediocre to quite good. Not a zine that will cause controversial discussion, but quite enjoyable. [1]

Pastak 5 was published in December 1979 and contains 80 pages.

It has this dedication: "We take this opportunity to thank Beverly Volker and Nancy Kippax. Because of them, we had a ball."

The editors also note: "Because of unforseen circumstances, we were unable to print Terri Sylvester's story, 'Yesterday, Today, and Tomorrow,' as promised. We extend our deepest apology to Terri." 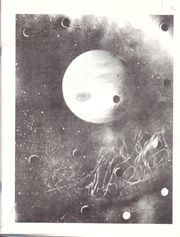 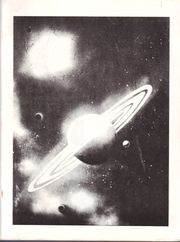 ...unreduced offset, mainly cartoon art, save for a good Vulcan page by Amy Harlib. Nice b&w astronomical shots on covers, which are a rather flimsy wraparound.

This zine is well laid out and lovingly edited, but the unreduced print and constant double-spacing give the buyer far too much blank white space. With some reduction it might have been at least a third smaller, and correspondingly less expensive. Five slight stories averaging less than two pages each further the zine's resemblance to French pastry — lots of air and little substance. There are also twelve pages of blank verse of somewhat uneven quality, three pages of poorly drawn Micky Mouse cartoons, and three half pages of ads. Two long stories are featured! Chapter 4 of Nancy Collins' "Full Circle," and "Interregnum," by Roberta Rogow and Carolyn Venino, "Victories of the Warrior" is the conclusion of "Full Circle," takes place in ancient Vulcan and features a female "Mutant... furred, apelike" warrior who is one of T'Pau's antecedents. T'Kreiger, as she is called, in turn skewers a mad 9' sehlat, a poisonous lizard, and a giant le-matya. She also captures an enemy spy, releases him for the thrill of the chase, and breaks his spine from behind with a shield hurled like a discus. All of this is described in loving bloody detail prior to the story's conclusion, when T'Kreiger dies in another gory hand-to-hand battle. "Interregnum" is a what-if sequel to APOTA, and its light tone and style come as a welcome finish to the zine. If you ever wondered just what the Iotians' home life was like, and just what they did with McCoy's communicator, here is the story, with plenty of humor added. All in all, I found Pastak 5 somewhat insubstantial for the money. [2]