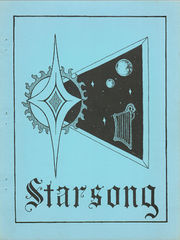 It collects all printed material from Only Stars Can Last and Omicron Ceti III and Friends.

Music is a universal language; if it can help the inhabitants of the Earth communicate, then surely music will play an important role as mankind reaches out beyond our solar system, making contact with beings of other worlds and other ways.

Music is also a form of artistic expression, a song is made up of both lyrics and melody, becoming greater than the sum of its parts. The lyrics give a poetic interpretation of an experience, or a feeling, and the melody breathes vibrant life into the words, letting the listener participate in the emotional experience. Voices raised in song can often be heard at SF and ST conventions.

Fans share music the way they share ideas, and lately, more and more fans are writing songs. Alongside fiction and art, music has become an integral part of fannish expression.

STARSONG was inspired by the desire to share music. Its contents reflect two projects of Omicron Ceti Three as well as additional poetry and artwork.

First, the music of our second album... "Only Stars Can Last" is a concept that grew out of the uncertain days when the future of STAR TREK was in doubt. We even doubted the creators, and in the title song, stated that "dreams belong to those that make them true", meaning that Trek was ours because, through fan fiction, we brought truth and reality to the dream. ST-TMP Is a reality now, and we all share in the excitement of the new human adventure. ST belongs to its original creators, too, for once again, they have brought its dream to us. The title "Only Stars Can Last" also refers to the feeling of constancy in the cosmos-- the one thing that endures is man's reaching out, ever farther, into the universe.

Producing that second album was a struggle. We drove ourselves to rehearse and record in spite of blizzards, bronchitis and the birth of a baby. Sometimes, in the face of rising costs, we were forced to accept less than perfection in order to bring the album in under deadline and within our budget. The studio we used threw us a few curves, too, but that's another song.

Our second recording project last year was the cassette tape, Omicron Ceti III and Friends. It was a wonderful experience, sharing the music of so many other talented people. It was hard work, too, for Rodney, who engineered the recording, and for our visiting musicians as well. The tape represents many musical styles and several ST and SF universes.

In STARSONG, you'll find the lyrics of the songs on the album and cassette, with illustrations and a brief word of explanation as to the origin and/or meaning of the song (because people keep asking me). The melody lines and guitar chords on our songs and several of the others are also included. I hope there aren't too many mistakes in the transcriptions, I tried, folks, and had the help of several people with more musical knowledge than I, but we're only human (so please, no LOC's on form from you educated musicians. Where were you when I needed help?)

The poetry section bridges the two music departments, and as a matter of fact, one of the poems, Vicki Clark's "Counterpoint", has already been turned into a song. In future issues I have hopes for developing and expanding the poetry part of STARSONG, perhaps to include non-Trek poetry, and to one day let the zine evolve into a "little poetry magazine".

It's difficult, I know, to write LOC's on music and poetry, but all responses will be appreciated. I'm looking forward to future STARSONGS, to reaching for and finding an ever widening universe through the all-encompassing language that is music.

Summaries are from an ad for the cassette tape in the songbook.