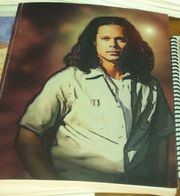 an alternative cover for this zine, this one is perfect bound 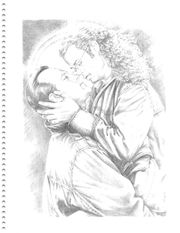 The single piece of art by Suzan Lovett -- the artist's title is "Once More With Clothes On." This illo won both a Sizzler and a Golden Guppy. It was also printed in Warriors #2.

All the King's Horses, All the King's Men is a 163-page slash Sentinel novel by Valaria. Color cover by MegaRed; B/W interior art by Suzan Lovett and Cat.

This is the rest of "All the King's Horses", which was published in Love and Guns 13. The first 35 pages were printed in L&G13 but in a much different format and with some content changes.

There is a minor crossover: a character from Kung Fu: The Legend Continues. "[He] crosses paths with our guys on his way through Cascade. He wasn't plotted ahead of time; he just showed up and insisted that he had a part to play in their lives, refusing to leave until he had his say."

Jim had very firmly pushed most of the traumatic events of his life very deep into a very dark closet and firmly closed the door. One by one, he's had to face most of them over the course of the series, but there's one that he hasn't yet, and must, if he and Blair have any chance at the relationship they both want. The novel covers a number of months from the start of their relationship, and contains an epilogue to show where they are six years later. [1]

In the aftermath of a particularly harrowing case, Jim and Blair finally find their way into each other's arms, and in each other's beds. This is where many Sentinel stories end, but in this slash novel, written by Valaria, these events unfold in the first 20 pages. Neither man could predict the downward emotional spiral that an attempt at a committed, loving relationship could precipitate, all because Jim Ellison, Cascade's master of repression, has one last monster buried deep behind the dead-bolted and padlocked door of his repressed-memory closet. It will take more strength and courage than either Sentinel or Guide has ever marshalled, and the solid support of their friends and family to face down this last demon from Jim's past. [2]

This novel deals with an adult survivor of childhood sexual abuse, and how he and his committed partner stumble through the current treatment of options, searching equilibrium. The abuse itself is referred to but not relived from the survivor’s point of view. That part of the story is from the partner’s point of view. All sexual activity between the partners is consensual, and there’s a lot of it. The fourth season doesn’t exist in this universe, nor does the last of season three, except as the occasional nightmare. There is a minor crossover (a character from Kung Fu: The Legend Continues). [3]