Manpain, sometime also referred to as Mangst (Maleangst)[1], is a term used by fans, particularly slash fans, encompassing a set of narrative devices that span literature, film and television. When a main character in a story (always male, generally white) is written with a particular kind of psychologically painful history that causes him to behave in specific ways, he is often said to have manpain.

From Man Pain: Fact of Fiction, a short X-Files essay by AdrianneFF in September 1999:

essay title icon, artist is not credited
"Man Pain." You've heard the term bandied about, you may even presume to know a bit about it. Maybe you have seen it, maybe you have experienced it. [...] Man Pain is, in its most simple terms, the awesome pain of being a man. [...] You may also be suffering from the ill-effects of Man Pain if you have ever done the following: Given your daughter to a bunch of aliens. Given your wife to a bunch of aliens. Written to letters to your estranged son while sequestered in a remote cabin somewhere in Canada. [...].

A term coined by fans who understandably got tired of seeing male characters' douchebaggery excused by a dark, tragic past, especially when the past involves hurting & dehumanize female characters solely to motivate the male hero.[2]

mimesere from the X-Files fandom is anecdotally credited with either being the originator or a very early adopter of the term. In 2009, she memorably described it from the character's point of view as being, "I'm a dude, this is my pain, this is the REASON FOR ALL MY DOUCHITUDE, BEHOLD MY EPICNESS AND DESPAIR," adding, "sometimes it leads to sitting in the dark, brooding."[3]

This adoption and popularization may have come through frequent conversations between mimesere and Jennifer_Oksana. Before its widespread adoption by slash fans, it was used by members of the OBSSE Mailing List to refer to Mulder for typical manpain behavior and because of a script note by Chris Carter that refers directly to "the pain of being a man".[4]

Duchovny certainly has that man pain look down as the voices in his head started talking to him.
REVIEW: Autumn's "Biogenesis" Review - SPOILERS by 5/17/99 by Autumn T, posted to ATX on 5/17/99[5] 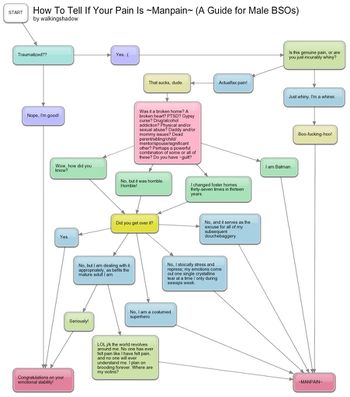 Some of the characteristics of manpain are generally held by fans to be:

It's not enough for your sister to be abducted; she has to have been taken in your place while you were paralyzed, unable to stop it. You can't just have a soul that allows you to feel remorse for the evil you did; you have to be cursed to lose that soul again if you feel a moment's happiness. – ladyvyola[7]

...like Lee Adama. I'm sorry, Lee, the world ACTUALLY ended in a nuclear holocaust, so your pain isn't any more important than anyone else's. You don't need a whole lake to represent it." – musesfool[8]

[Manpain is] Donna Noble losing all of Time and Space and yet we all get to focus on the Doctor standing tragically in the rain..." – teenygozer[9]

I loved the guy, I loved the show for about half its run, but it became clear to me that they did bad things (abduction, cancer, more abduction) to Scully to show Mulder's manpain..." – thisficklemob[10]

...all the women he's touched (ew) and occasionally his children too (for effect) need to be tortured/maimed/killed so he can become a hero/have manpain." – lovehotel[11]

MANPAIN comes out of the idea that white men have intrinsic value above and beyond all other people." – mswyrr[12]

One of the things that has been teased out in this whole discussion is the assumption that there is a substantive difference [between] 1) real pain in real life, 2) pain in fiction that is treated seriously and deserves (and generally gets) the same from its audience, and 3) pain in fiction that is used exploitively as a quick and easy tool to further characterization and earn sympathy from the audience—and correct me if I'm wrong, but in these cases I would say it is often assumed to be a largely female audience, who are generally understood to be suckers for that sort of thing." – walkingshadow[13]

Jack Harkness[...]is always doing horrible things to other people (torture, mind-wipes), then moping about how tragic it is that he "has" to do these terrible things, instead of feeling sorry for the other people whose suffering he's just caused." – rusty_halo[14]

Fans' response to, and tolerance for, these kinds of characters varies widely from character to character and fan to fan. The quality of the writing in the source material makes a difference to fan response. If the source is a tv show or film, the skill of the actor can have a big impact on the fannish perception of his pain. Characters with manpain often inspire the full ranges of fannish devotion and derision. Slash fans, who are a majority female audience, can have fairly sensitive antennae to what they perceive as cynical exploitation by canon creators, and their assumptions about female audience response to male characters' suffering.

All that said, it is undeniable that many of the characters who are most widely regarded as having manpain are also widely adopted by fan creators, particularly in writing slash fanfiction. blacksquirrel notes about this phenomenon:

It's hard to truly encapsulate the ironic edge of manpain which is both the emo angst that makes our hearts go pitter pat, and the vaguely absurd fixation of characters who really need to get over themselves and realize that they are still alive, still the heroes of their own stories, and still better off that most other people in the world."[15]

Thingswithwings' vid, The Price [16], summarized by her as "Mr. Billowy Coat King of Pain" is an expose on the manpain phenomenon, and culminates in a sequence of shots of characters crying a single perfect tear, with post-process tear-sparkle added on. The vid links to a meta post on the subject which attracted a great deal of conversation in the comments and in other posts.[17][18]

So what is man pain? It's this tunnel-vision, narrow-minded view of one's own pain that completely overlooks and ignores how others suffer or might even suffer *more* because of the same tragedies. (...)

Fictional men do this. Often. More importantly, narrative pov does this by choosing to focus on men's suffering (at the expense of others'), which always makes me go, "Hmm, but what about the women?" And it's not always the women who get overlooked in this kind of storytelling, but even lesser POV characters. One good example is all the movies where a white person helps people of color make some civil right achievement, and the focus is often on how HARD it is for the white people to go against their own to help these people out, ignoring the MUCH GREATER suffering of people who have never *had* the privilege of that choice.

A more specific example of man pain is given to us on Buffy in the above-quoted immortal words of Cordelia Chase: "This one time I hit a girl with my car. It was the most traumatic experience of my life and she kept trying to make it about HER leg. As if my pain meant nothing." <3

actually on this topic

manpain is a META concept that exists to discuss FICTIONAL SEXISM. in real life, if you laughed about “someone’s manpain”, you would be a disgusting piece of shit for a human being no matter what your gender was. if you were laughing that someone’s life was destroyed by the death of their mom or their fiancee you would be a fucking shitheel not worth my time, and i would not watch a fucking tv series about you.

Oh god yes. Are there people who don’t realize this?

The significant difference between fiction and real life is that in real life things just happen, whereas in fiction things only happen because of choices made by the writer/s.

When fancritics talk about manpain, we’re not mocking Bruce Wayne or Dean Winchester for their suffering; we’re mocking the writers for thinking that hurting them is the best way to tell the story, and that killing (usually female) characters they love is the best way to hurt them.

And perhaps more importantly: Killing off female characters is a good way to “hurt” them that won’t actually hurt them or slow them down, it’ll just make them mad.

“Manpain” is not the same thing as “pain felt by men”.

Manpain is the prioritization metric that says the lose of one person by a male character in a story must be tended and treated as more significant than any lose faced by a female character.

Like, the hardboiled detective novel - a woman walks into the detective’s office to get an investigation into the recent death of her husband last week, and she is supposed to be immediately sexually available to the detective, with no emotional resonance from her husband’s death, whilst Unshaved Broodman of the Clan BroodingManPain is still drinking himself off the force because he lost his buddy back in ‘67 and it’s 1980

That shit is manpain. Like ManPain™: ask for it by double on the rocks![19]

Manpain can also be understood as a product of toxic masculinity making it taboo or "unnatural" for men to express emotions.[20]