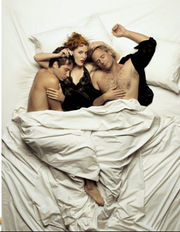 This inside photo of Gillian Anderson, David Duchovny, and Chris Carter is from the May 1996 issue of "Rolling Stone."

Christopher Carl Carter (born October 13th 1956 in Bellflower, California, USA) is an US-american screenwriter and producer that created, writes, produces The X-Files. He also directed some of the episodes.

Carter is also creator of the TV show MillenniuM and co-creator of the X-Files spin-off The Lone Gunmen as well as a TV adaption of the Harsh Realm comic series.

Together with Joe Harris, he produced a comic series based on the X-Files and MillenniuM.

Carter is known for the long-winded monologues his characters like to give.

Chris Carter has no official website and/or social media profiles. He is known for his elusive answers to journalists and fan questions. He is notorious for "not giving the [fans] what they want".

In the 1990s, there was a fan site called "CarterPhile" which is now defunct but still may be accessed via waybackmachine.

According to a rumour, some writers from the show would read the postings on Official X-Files Message Board to gauge fan reactions to their episodes. One strong rumour floated around that a member with the screen name DFOWLEY was actually showrunner Chris Carter, because posts of the poster indicated that the author "is, indeed, very talented and clever writer who had a deep understanding of the television and motion picture production industries." [1]Asked whether he participated in online discussion, Carter always denied everything.

In A New Species of Couch Potato Takes Root, an 1994 article by James Barron in the New York Times the following could be found

It is all a bit much for Chris Carter, the show's creator. "It's a little hard to synthesize all these things," Mr. Carter said at the end of a week in which 10,000 people used the "X-Files" section of Delphi.

That is not to say he is usually impressed by what he sees on line. "It's not as interesting to me as a well-written letter, hard copy, snail mail," Mr. Carter said. "Most of the Internet stuff is very conversational. Some people think that's the beauty of it. The written word is what it is, and if someone is going to put together a thoughtful commentary or criticism, it takes more than just sitting down and dashing something off."

Carter attended a handful of official and fan-run conventions and fan events; his first convention appearance was at one of the two Seattle Expos in 1995.

Continuity and The Chris Carter Effect

Carter does not believe in having a show bible since he things this will inhibit the creativity of the writers. This lead to several continuity errors and contradicting character facts in The X-Files. For example in one episode, it's shown that Scully got her golden cross necklace as a gift for Scully's 15th birthday in February. In an episode three years later, it's established that Scully and her sister Melissa both received that necklace on Christmas.

Carter was also an advocate that Mulder and Scully's relationship should never become romantic. After a large majority of the X-Files fandom became shippers and demanded more MSR on the show, Carter started to give in somewhat, but scripted dim lit kisses (e.g. in the sixth season episode Triangle) or at strange camera angles (for example in the second X-Files movie), especially in productions he directed.

The X-Files was full of convoluted and confusing plots, things that Carter claimed he would explain in a satisfying and meaningful manner. When many of these plots and arcs were left hanging, a lot of fans were frustrated and disillusioned. See The Chris Carter Effect

Sexism in the Writer's Room and Director's Chairs

Carter's portrayal of female characters in The X-Files was varied. Many fans appreciated and applauded the strong and dynamic character of Dana Scully. Others disliked some of the characterization regarding Scully's role in biological and reproductive plotlines. Some of the episodes were especially problematic regarding females and consent. One example is Small Potatoes which made light of what was essentially rape.

After the announcement of the eleventh season in 2016, it became public that the whole writer's room would only consist of male writers, three of them of having little to no experience in writing. After negative reporting in many trade papers and a comment by X-Files lead Gillian Anderson on her social media platforms, this fact was rectified in August when it was announce that three female writers and two female directors had joined the production.