From Fanlore
(Redirected from Mulder)
Jump to navigation Jump to search 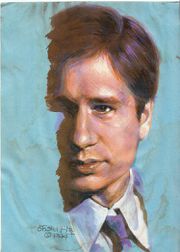 drawing of Fox Mulder by Barbara Fister-Liltz. This art print is dated 1994 and is water damaged

Fox Mulder is a main character on the FOX television show The X-Files. His partner is Dana Scully.

Fox William Mulder was born on October 13, 1961. His four-years-younger sister, Samantha, disappeared in 1973, in a scenario common to alien abductions, while her older brother watched helplessly. Perhaps as a result, Fox Mulder grew up to become an FBI agent, first working in profiles of violent criminals and then originating his own division after which the show is named. X-Files are, strictly speaking, cases that are difficult to explain and nearly impossible to solve. As a personality, Mulder is an incorrigible conspiracy theorist, constantly willing to speculate beyond the realm of the likely or even reasonable. He exhibits tendencies toward paranoia, which in some cases appear to be totally justified.

Although he famously said, in later seasons, "I don't know, I'm not a psychologist," Mulder does in fact have a degree in psychology from Oxford University.

Mulder is always called by his last name, except by people who wish to irritate him.

Fannish Engagement with the Character

Although the term was not in usage at the height of X-Files fandom, Mulder is undoubtedly a woobie, and a great deal of fanfiction dealt with Mulder suffering abuse, sometimes so that he could receive comfort from another character. Stories which inflicted suffering on Mulder were part of a trend of Muldertorture. Another popular Mulder-centric genre was Profiler!Mulder casefiles with Mulder profiling (often non-supernatural) serial killers set either pre-XF or with him reassigned away from the X-Files.[1]

Fans who shipped Mulder often did so with either his partner, Dana Scully or Alex Krycek, an amoral character of unknown allegiances who appeared in only several episodes. Another popular partner was FBI Assistant Director Walter Skinner, Mulder's boss through much of the series. 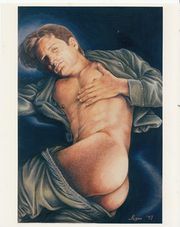 Fox, a nude drawing of Mulder by Suzan Lovett. The majority of Lovett's nude fan art focuses on two figures or pairings (ex: Mulder/Skinner). However, in this pencil drawing, Mulder is posed alone, gazing sensuously back up at the viewer, allowing the viewer to imagine their favorite pairing. This broadens the appeal of the drawing to encompass fans of other pairings such as Mulder/Scully and Mulder/Krycek. Note the subtle white shadowing around the head and buttocks that matches the shape of the body and draws the eye towards what the artist sees as the key features of Fox Mulder.

In the show's early seasons, Mulder would occasionally be spotted wearing reading glasses. They were a hit with a small but vocal group of fans and were adopted as the "MulderGlasses," earning entire archives dedicated to screen caps and fanfic that featured them.[2]

Fanon about the character

Often shown sleeping on his couch on the show, Mulder was frequently written as man who didn't own a bed. It wasn't until the sixth season episode Dreamland that we saw Mulder's bedroom, at which point it was furnished with a waterbed and a mirrored ceiling, though, admittedly, not by Mulder's hands. Some fans adopted the furnishings while others continued to let him sleep on the couch.

A common (though not undisputed) point of fanon was the general belief that Mulder had suffered some kind of abuse in his childhood. No direct evidence of this is available in canon; however, the fandom was strongly swayed in that direction by an influential early novel-length fan fiction story, Oklahoma by Amperage and Livengoo. In that story, a barely-sane Mulder matches wits with a serial killer, resulting in overwhelming emotional trauma. It is reasonable to say that the vogue for Muldertorture, as opposed to torture of any other character, derives in part from the influential nature of this one story.

Because of David Duchovny's Jewish background and comments made on the show itself, it was common practice to write Mulder as Jewish.[3] Fans weren't the only ones to make this assumption. While the show never explicitly identified Mulder as Jewish, it often got brought up by other characters, usually in a pejorative manner. Mulder never denied it.

Bjunes: You work for them too, don't you?

Mulder: (annoyed) It's Mr. Mulder to you, you peanut-picking bastard. Now, Mr. Crump, what can you tell me about what's happening to you?

2) Mulder: On behalf of the International Jewish Conspiracy, I've got to inform you that we're almost out of gas.

Mulder: (sarcastic) That was an apology, right? Gee, I don't know if I can see to drive, my eyes are tearing up so bad.

It is canonically implied that at one point Mulder was married in 1989. A common fan theory is that he was married to Diana Fowley, who canonically discovered the X-Files with him around that time.