Sam Winchester was a fictional main character from the Supernatural television series, portrayed by Jared Padalecki.

Sam is originally the focal character and protagonist of the series. He and his older brother, Dean, protect the world and frequently save people by hunting supernatural creatures and other monsters such as demons, werewolves, vampires.

Sam Winchester was born in Kansas to John and Mary Winchester, the younger brother of Dean Winchester. Sam wanted a normal life instead of the family's world of hunting and protecting helpless strangers. Sam challenges his family, especially his father, John, whom Sam frequently rebelled against. It is mentioned that Sam was actually John's favorite son, and they clashed due to their similar temperaments and personalities.

Sam is the wayward son of the family, 'the rebel' (hence one of the theme songs frequently played for Supernatural "Carry On My Wayward Son" by Kansas). He left his family behind to make his own way, starting a normal life and going to university. Sam is described as extremely intellectual, ambitious, introverted, and determined, but also rebellious, stubborn, and proud. Sam has often done wrong things for the greater good and has been frequently been associated with the 'reluctant hero' trope within fandom.

So, because Sam is strongly independent and ambitious by nature, does it make Sam seem self-absorbed and selfish at times, as a portion of the Supernatural fandom seems to believe? Maybe. But does it make Sam wrong? Certainly not. There may be rather more demons and sawed-off shotguns in his life than in ours, but he's a person we all know and have been at some point: he's just a twenty-something kid trying to find his own way in a very loving, loyal, stifling, dysfunctional and frustrating family.[1]

Eric Kripke, the creator of Supernatural, has called Sam the focal character or protagonist of Supernatural, focusing on Sam's journey. Kripke has said that Sam was modelled after Star Wars hero Luke Skywalker, though, many fans argue that Sam's descent to darkness over the course of the series as and his dark destiny make his character more similar to Luke's father and "the chosen one" of the Star Wars saga, Anakin Skywalker/Darth Vader. Sam's character is also heavily influenced by Joseph Campbell's "The Hero's Journey" as mentioned by Kripke. In the early seasons (seasons 1 and 2), Sam's character arc involved reuniting with his family (his father, John and his older brother Dean) after four years of leaving them behind and leaving the hunting life style for life at Stanford. Dean asking for Sam's help was Sam's "call to adventure". He bonded with his elder brother Dean and became dedicated to hunting down the 'yellow-eyed' demon, Azazel, who killed his mother, Mary, six months after his birth (November 2, 1983) and his girlfriend, Jessica on the same date his mother died (November 2, 2005). Azazel had plans for Sam involving Special Children with special powers (like Sam, who developed psychic abilities at 22) and prepared Sam to become the vessel for Lucifer (aka Satan/The Devil), the ruler of Hell and the fallen angels (also known as demons).

Sam struggled resisting and surrendering to aspects of this hellish plan and faced problems in his relationship with Dean. This gave Sam his 'reluctant hero' trope. At the end of season 5, Lucifer inhabited Sam's body but Sam had took control and saved the human race by throwing himself into Lucifers cage, along with his half brother Adam, who was the vessel for Lucifer's older brother, Michael.

Season 6 focused on Sam's incomplete redemption after returning from Hell/Lucifer's Cage without his soul intact and repairing his relationship with his brother. Season 7focused on Sam recovering from hallucinations of Lucifer, hell pain, mental illness, PTSD, and severe trauma. After Castiel was revealed to be alive, towards the end of season 7, he healed away Sam.

In season 8, Sam spent a year living a normal life with his new girlfriend Amelia in Texas while Dean was trapped in Purgatory with Castiel. After Dean returned from Purgatory, there was tension between Sam and Dean due to the revelation that Sam had quit hunting, didn't look for the presumably dead Dean, and gave his responsibilities. Sam discovered that Dean had befriended a supernatural monster (Benny the vampire) but Dean had ostracized Sam for befriending monsters (such as Ruby and Amy).

Sam took on the Trials of God in order to close the gates of Hell, locking demons out of Earth forever. Taking on the trials has a severe effect on Sam's well being and health, but he remained determine to complete the trials despite his illness. In the last episode of Season 8, "Sacrifice" it was discovered that if Sam completed the final of the three trials, he would die. Dean convinced him to not complete them. In season 9, Sam was possessed by a fallen angel, 'Ezekiel', who has said that he will heal Sam after the damage from the Trials of God. 'Ezekiel' had lied about who he was, his identity being Gadreel, an angel imprisoned before all the angels fell. Gadreel is no longer possessing Sam.

In Fanon and Fanworks 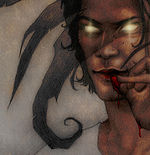 Art by quickreaver, featuring Evil!Sam, in this piece showing Sam with yellow demon eyes, this image was created for the fic Theosis

Sam's most frequent, and most popular, slash pairing in fanworks is with his brother, Dean (Wincest). In later seasons of Supernatural, he was sometimes paired with the angel Castiel (Sastiel), or more commonly with the archangel, Gabriel (Sabriel). He has also been paired with the fallen archangel Lucifer, especially since he was Lucifer's true vessel and Lucifer referred them them as MFEO (made for each other), the Sam/Lucifer pairing is often called Samifer, not to be confused with the nickname for Evil!Sam.

Sam is also featured in het fic, where he is frequently paired with his late girlfriend, Jessica Moore. Poly fic featuring Sam/Jess/Dean is rare but not too uncommon.[5] Sam is also regularly paired with the demon Ruby, with whom he had a canonical sexual relationship. Some of his smaller, but well known, het pairings include Sam being paired with Eileen (Saileen), a fellow hunter and friend who Sam began a canonical romantic relationship with in season 15, or the witch Rowena (Samwena), an enemy turned friend. Readerfic and the pairing of Sam with Original Female Characters is also fairly common.

Sam has a host of different nicknames, the main one being Sammy, which is a canon nickname that only Dean is allowed to call him, but some other people called him Sammy, much to his annoyance. Other nicknames include Moose, Jolly Green and Giraffe, all coined by the crossroad demon and king of hell, Crowley. These nicknames for Sam coined by Crowley often refer to Sam's height. Some other nicknames for Sam that have been used in the series or fanfic are Gigantor and Sasquatch or Samsquatch.