example of a screencap supplied by a Wincest fan, showcasing the intense emotional and physical connection between the brothers

You know Sam and Dean Winchester are psychotically, irrationally, erotically codependent on each other, right?canon quote by the angel Zachariah in the episode Point of No Return

The main appeal of the Sam/Dean pairing is the incredibly intense, chaotic, consuming and emotional connection and indescribable love between Sam and Dean as depicted on the show itself. (They are each other's world, would die for each other and actually do so; then they come back because you don't leave your brother behind!). The relationship between the two brothers is the emotional center of the show; showrunner Sera Gamble has referred to Supernatural as “The Epic Love Story of Sam and Dean”.[2] Some fans are drawn to the idea of Sam/Dean as tragic romance and have even argued that Sam/Dean are the M/M version of Romeo/Juliet.[3] (It also doesn't hurt that both characters are played by attractive young men.)

In response to a 2007 meta post by a non-Wincest shipper, a few fans explained that while the incest was a kink for some Wincest shippers, for others, the fact that Sam and Dean were brothers was not a factor in their interest.

On the show, there have been many references about Wincest, including many outsiders thinking they are a gay couple to the activities in which Sam/Dean engage in having romantic undertones (chick flick moments, emotional bonding, star-gazing together), to being declared as metaphysical soul mates bonded for life that also share Heaven together. Many fans also feel that Sam/Dean's love for each other is much more then that of a brotherly, platonic or friendship love and that their connection and bond is more along the lines of a romantic love. This is because Sam/Dean's love for each other has been seen to be extremely emotional, intense, passionate, all encompassing, highly co-dependent and consuming. 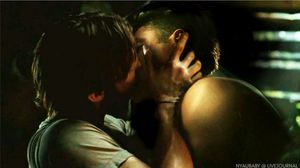 The first episode aired on September 13, 2005[4], and Sam/Dean slash kicked off immediately. The Supernatural slash community sn_slash (Supernatural Slash - For all your brotherly needs) was founded the very next day and the first story posted was a short 350-word snippet called "Reunion" by janedavitt.[5] Other stories that implied incest such as "Burdens In The Dark" by wistful_fever (16th September)[6] soon followed.