Highway to Hell is a slash wincest anthology. It was published in 2007, contains 147 pages, and contains 10 stories.

Some issues were labeled #1, but was the only issue published. 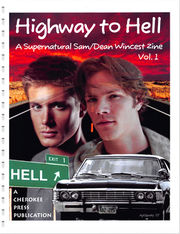 The front cover. This one has "#1" but not "by AgtSpooky" on it. This edition has 120 pages and is lacking the story "Failure." 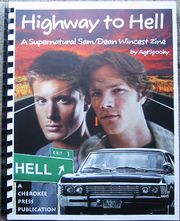 The front cover. This one doesn't have "#1" but "by AgtSpooky" instead. This edition has 147 pages and contains the story "Failure."

The issue that has "v.1" on the cover is lacking a story that is on the table of contents on the publisher's website. That zine contains 120 pages.

The publisher's website lists the story in the table of contents as well as a page count of 147 pages. The story is: "Failure (Sequel to "Stronger Now" and "Never Again" - Sam and Dean finally learn the truth behind the visions and Dean finds out his decision in Kingsburng has serious consequences.)"

This probably means that "Failure" was added to a later edition, the one that does not have a volume number on the cover.