Fleshflutter is a gen and slash Supernatural fan writer whose work has played a big role in shaping the online Livejournal Supernatural community. She started the Supernatural Anonymous Kink Meme (a.k.a. Blindfold SPN) in 2009 before handing it off to its new mods.

She is perhaps best known for two of her Supernatural Big Bang stories: Do I Seem Bulletproof To You?[1] and The Incestuous Courtship of the Antichrist's Bride. Both stories illustrate her wide range in subject matter and tone.

Do I Seem Bulletproof is a J2 RPS AU which has Jared taking a job as driver and bodyguard to Jensen, who is an extremely expensive prostitute with a bad habit of attracting crazy people. The story's themes weigh heavily towards drug abuse, self-worth, love and betrayal.

The Incestuous Courtship is a humorous tongue in cheek Wincest tale of Sam Winchester accepting his role (reluctantly) as the Anti-Christ. In doing so, he inadvertently signs up his brother Dean to be his consort/bride. Match-making angels and demons, ritualistic sex on altars and drunk dialing phone calls to Satan are some of the more popular plot-points from the story.

Other popular and often recommended stories include J2 spy AU Someone You Might Have Been[2] and the unfinished WIP J2 AU Rule 26, and Sam/Dean fic The Firefly That Loved Metallica.

Fleshflutter has been cited by many fans as being a major creative influence in their fannish lives:

I don't talk about this much in the LJ, but I have some experience in the pro fiction world, and there are some writers in fandom who sweep the floor with professional fiction writers. I say some - my research into cult media, discourse and convergence, involves reading a wide breadth of fan fiction, and yep, that includes the ungrammatical, the creepily misogynistic, and the just plain eye-bleedingly bad. But it also includes the mind-blowingly brilliant. ... Honestly, when people dismiss fanfiction as a form I just smile sweetly and remind them that the novel was once dismissed in exactly the same terms, and would they like to read my MA thesis on the very recent and tenuous invention of intellectual copyright? Fandom is love. The end."[3]

In 2008, Fleshflutter participated in "Ask The Author" at the spnroundtable and talked about her interest in in Supernatural and her writing:

I came into SPN fandom in May 2007, just after watching Wendigo for the first time. Previous fandom history includes Harry Potter, Final Fantasy VII, Star Wars, and Neverwinter Nights. Both my older sister and older brother wrote, though not fanfiction, and both were into genre tv shows, rpgs, dungeons and dragons and all related geekery, so I feel like I've been standing on the edge of fandom since I was tiny.

I watched the SPN pilot when it was first aired on UK television and dismissed it as pretty dreadful. I gave it a second go a few months later and it was transformed in my eyes. I latched on to SPN as my new fandom very quickly, though it took me a while to get into the right headspace to write any fanfic for it. But I devoured every bit of fanfic I could find and found myself hooked in about a week or so.

I was less bothered about the incest angle regarding SamandDean than perhaps I should have been - Harry Potter fandom is great for removal of all squicks. After one false start, the first thing I wrote in fandom was, tellingly enough, evil!Sam/conflicted!Dean - ...But a Whimper (nc-17).[4]

Her works have also inspired fan art by other fans such as petite madame's artwork for "Do I Seem Bulletproof To You?",[5] Rin's drawings for Rule 26.[6] and Sarahtoga's work for "Dark Side of the Moon." [7] Songvids have been made to accompany her writing, such as liv niggle's vid for Someone You Might Have Been.[8] or her vid "Colorblind" for ""Day Before Hell" [9] Spin-off fan fiction has been written, such as glorious spoon's "Life is a Highway which is a sequel to fleshflutter's "The Old Block' and "Pictures from an Empty Album" by 2ndary author, a sequel to "Words in the Picture."[10] Over 16 of her stories have been recorded as audiobooks or podfic.[11] Her most recent Big Bang "Flying Weight" caused one fan to comment on Tumblr: "Oh my god. I just finished reading fleshflutter’s Flying Weight and I feel like I need a fucking cigarette. Holy shit. I am dazed by how fucking intense that was. I can’t even see straight."[12]

In late October 2011, Fleshflutter temporarily deleted her Livejournal, thereby removing a large portion of her fan fiction and fan art from the internet. Fans created a temporary archive in order to exchange her stories until she undeleted her LiveJournal.[13] A few of her stories can be found on AO3, others at amalthia's Ebooks Library,[14] and several have been podficced and are available at the Audiofic Archive.[15] 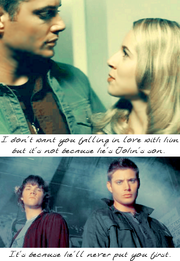 In addition to the Russian and Chinese translations, fleshflutter's work has drawn the attention of other fans abroad. Below, French fan kazue7294 makes a list of her favorite fleshflutter stories and discusses why she is recommending them:

Artwork by fan artists who have been inspired by Fleshflutter's fanfic

Note: when Wiki pages are made for either these artists or the fan fic, please move the artwork to those pages. Until then, this section is intended as a placeholder for fan art that has been inspired by fleshflutter's fan writing. These images were not created by fleshflutter.