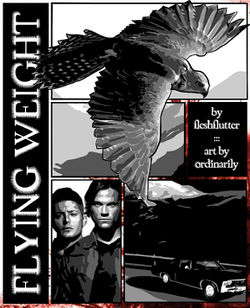 story cover by ordinarily. The artist writes: one of Three digital images, inspiration courtesy of Chip Kidd (who is, like Rufus in Kill Bill 2, The Man) and graphic novel illustrations à la mid-nineties Vertigo." Additional art can be found here.[1]

Flying Weight is a Wincest story written by Fleshflutter as part of the 2011 Supernatural Big Bang.

Author's summary: Sam wakes after being soulless for three years to discover that Dean and his relationship with him have undergone some serious changes. Through traveling and hunting with Dean, Sam struggles to put his life back together after events he has only limited memory of. A season six wincest AU.

A podbook was created by meansprite in the spring of 2013 and posted here.

"It's all from Sam's POV, and he's hurt and confused and feels unloved and miserable through about 98% of the story, convinced that Dean preferred him soulless and doesn't love him now that he has a soul. It's not an unreasonable assumption, given that Dean keeps telling him that over and over, and the few memories Sam gets from behind his Wall pretty much confirm it. At the very end something happens that basically breaks Sam and makes him decide to walk away because he's really deeply convinced he just doesn't know Dean anymore and Dean doesn't love him and probably can't.

Then there's a very very tiny bit where Dean tells him he does like him better with a soul, and seems to find it amazing that Sam would ever think otherwise. They have what seems like pretty unaffectionate, desperate sex and that's it.

Don't get me wrong, the writing was great - but the storytelling was unbalanced in a way that made the relationship plot very affecting and upsetting in the first nine tenths of the story, and then kind of unbelievable and far too quick in the last tenth. If you're looking for hurt/comfort, but like happy endings, just be advised that this is like... a HURT/comfort story. I needed to go read something lighter to pick me up after."[3]

"I think FF did a great job, but it was one filled with a lot of subtleness that requires you to actually think about what she's saying, rather than just how Sam reacts to it. Sam is, in an extreme way in this story, an unreliable narrator, because his reactions are emotions, not the distanced reactions of someone who actually tries to figure out what's going on. They had a bitch/jerk moment, but they were calling each other freak and monster-- these aren't affectionate terms no matter how you slice it. She painted RoboSam/Dean as incredibly abusive, warped, and basically it seemed like the last port of Dean's hopelessness. It's a story of misunderstandings, because Sam and Dean aren't perfect. If this were original fiction, the impression you got would, I think, be construed as bad writing, because there is nothing to inform a reader within this story itself that the ending makes sense. But it's fanfiction, and so you go in with the knowledge of not only their relationship in canon, we also saw how Dean felt about RoboSam-- and though this goes in a different direction, we as readers shouldn't be fooled by Sam's biased POV. "[4]

"I want to say off the top here that fleshflutter is an excellent writer who puts out stories that are well written, have good pacing, good dialogue, some humour, and never seem to descend into melodrama. Her plots hang together and the action is bound to be exciting. I know that almost goes without saying, but it bears mentioning that the potential is always there for a very good read with a writer like this.

The other thing fleshflutter writes is sexual and relationship dynamics that are always of a single flavour but can range from extreme heteronormativity where there is an answer to which one is the girl, to something that people who think bottom is more than a sexual position by natural law and people who really, really don't can both read and enjoy. No one ever has to ask the Top/Bottom question with her stuff. You all know which one of those two kinds of people I am, right? And that I never, ever need to know the answer to that question....

So, Dean the Woman was in a relationship with soulless!Sam and Sam is jealous. That's really the whole plot. Sam is measuring himself against his former incarnation, jealous that Dean seems to have liked him better and--okay the resouling knocked a few IQ points off Sam apparently because he can't seem to grasp the implications of the fact that soulless!Sam was not capable of love and was capable of acts of abuse, manipulation and violence.

This is a view of Sam as so utterly self involved that he isn't actually capable of love or empathy either. I don't buy this view of Sam, even though it is very popular among some authors who want objectified suffering passive Dean balanced with Sam the selfish and callous user. This kind of characterization reads as bending the characters to fic the narrative kink or the trope to me. ....

People think this story has a happy ending. Which I'm not saying the author does, I can't tell and I don't care, but to me this story is dark, dark stuff. And it's not a bad read read as darkfic, although I doubt I'd get the consciousness-raised Dean I want in what looks like the inevitable sequel. My frustration with it stems from me thinking I was getting Vampire Dean, and he's not. The Vampire stuff is there is brief, and it's canon Vampire stuff rather than Buffy or Rice style, but there's no real depth to how this change has affected Dean and how being a killer of humans (no hiding behind calling them doomed meatsuits anymore) and drinker of blood has changed him or his view of himself, because it hasn't played any discernible part in the changes we see in him. This is the story of Dean the Woman and abuse survivor.

I'd like to read Vampire!Dean. This wasn't it. I like examinations of co-dependency, but not manipulation and abuse--and I'll reiterate that I'm talking about his relationship with Sam here, not the soulless version who is more obviously an evil abuser.

It's clear to me that this story is broadcast on a frequency I can't receive." Read the entire in depth review here.[5]

"Sam’s desperate struggles to get back on track, his anger and love, and the sequence of revelations that devastate Sam and make him oscillate between determination and despair are all powerfully done."[6]

"I felt that way too tbh, but then another reader told me to go reread the story again, knowing what I know... and imo it really works. I ended up being very impressed at how successful FF was at writing Sam as an unrealiable narrator. The second time through all saw all the places where Sam is making assumptions about the meaning of Dean's words and the motivations behind his actions. I could see the moments of Dean happy at Sam's shirt and noting how Sam eats and sleeps, at his moment of disquiet at Sam not asking about whose blood Dean is drinking, etc and other little signs that meld well with what we see from Dean in canon after souled!Sam returned. It's just that the reader is so deep in Sam's POV that we stop questioning it and taking his judgments for the truth. Very satisfying for me now. Typically I can't read woobie fic or victim!Sam or victim!Dean fic because it comes off as OTT and melodramatic to me. But once I had the whole picture... here you get all the hardcore angst and wallowing without Dean actually being written an an OOC dick or feeling like Sam is just being overdramatic or a delicate flower (because the emotional torment he's going through feels reasonable and not exaggerated).[7]

"Fleshflutter takes the cliches and runs, runs, runs with them aaaall the way to the bank (sole spoiler) eventual happy ending.

Conclusion: Mmmm, I love me some fucked-up Sam/Dean that takes the tropes and shifts and prods at and messes with them and executes it really well."[8]

"'m pretty sure if you spend any time in the SPN fandom, you know exactly who fleshflutter is. She's an absolutely brilliant author. I wasn't thrilled with the sixth season of Supernatural, but stories like this make me change my opinion. She takes one small thread of canon - Dean being a vampire - and runs with it. This story is brilliant, dark and enthralling. It's raw, vulnerable and absolutely amazing. I'm pretty sure most Sam/Dean fans have read this, but if for some reason you haven't, do yourself a favor and read it immediately."[9]

"Oh my god. I just finished reading fleshflutter’s Flying Weight and I feel like I need a fucking cigarette. Holy shit. I am dazed by how fucking intense that was. I can’t even see straight."[10]