Sinful Desire was a slash Supernatural fan fiction archive that focused on Wincest or the Sam/Dean pairing. The archive also accepted RPS or J2 fan fiction.

Stories had to have a minimum of 100 words, and individual chapters could have a maximum of 10,000 words or be broken into multiple chapters.

At some point, it became a "archive only site," meaning no new fanworks could be uploaded.

In September 2016, it was announced that Sinful Desire would be moving to the Archive of Our Own as an Open Doors Project.[1] The import was completed in December 2016.

Sam/Dean - Stories in the Supernatural-verse. Please do NOT place stories in the main Sam/Dean category - a story must go into one of the subcategories listed below. Other pairings and pre-slash allowed, but ultimately, the main pairing must be Sam/Dean. 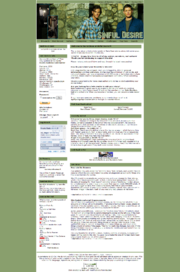 Jared/Jensen (or J2) - RPS stories involving the two actors who play Sam and Dean in Supernatural, Jared Padalecki and Jensen Ackles. Other pairings and pre-slash are allowed, but J2 must remain the main pairing.

As of April 7, 2011, the most read stories were mainly J2 RPS stories, not surprisingly given that Sinful Desire was one of the few archives to accept J2 fiction.

The Billionaire's Reluctant Husband by house_of_lantis
Summary: Billionaire Jensen is a playboy and he needs a husband pronto if he wants to keep his company and his inheritance. After a chance meeting with quiet and hardworking Jared, Jensen decides that he’s found the perfect candidate. The arrogant Jensen thinks he’s got Jared in the bag, but when his new husband refuses to sleep with him and doesn’t really even seem to like him, Jensen convinces himself that he’s happy with his open marriage lifestyle. But Jensen becomes increasingly obsessed with his new husband and discovers the truth behind Jared’s dark past.

Alpha Pack by house_of_lantis
Summary: J2 Werewolf AU. Jensen Ackles is the Alpha of the Dallas werewolf pack. Now at the age of 30, he’s looking for a permanent mate. Jared Padalecki is a wild and reckless cub. He’s fascinated with the Alpha, but Jared is no one’s Beta.

Un-Freakin'-Believable by Blazon Paradox
Summary: Jared and Jensen spent a whirlwind drunken night together. This is the aftermath.

Falling by karfraegh
Summary: Summary: Jensen is on his way home, waiting at Vancouver airport for his flight. He never expected to have a tall guy literally fall at his feet

Look What Love Has Done by laminy
Summary: Sam's jeans start to fit a little tighter, and it's all downhill from there.

It's Only a Job: Trash!Verse! by demon tongue
Summary: Jared is a garbage man, and Jensen has a lot of trash. They meet andfall in love, but not everyone wants to see them together. Sexual harrassment rumors about Jensen, lying friends and a horrible accident threaten to break them up. Can their love and some incredible sexual chemistry be enough to weather these challenges? Stay tuned for: pool sex, beach sex, on-the-Impala-sex, mirror sex, on-a-motorcyle-sex and more!

Endless Feeling by Ika Ackles-Padalecki
Summary: Jared met Jensen at the most unexciting place on Earth. From friends they became instant lovers. When they almost reach the happiness that they longing for, secret that was hidden now revealed and tragedy that strike tend to break their dreams apart.

Smoke & Lightning: Heavy Metal Thunder by Bloody_Adorable and Eviltwin
Summary: AU. Jared's a classic case of rich kid gone wrong, whose only sense of family comes from his motorbike, the guy he rents a garage from to live in and the precinct cops who know his face better than most already. Jensen's a hard-working student whose family are helping push him towards great things. What happens when their two worlds collide, and will Jared's troublesome nature be too much for Jensen to handle?

An Unexpected Love by angels3
Summary: Grief stricken over the death of his brother, cynical movie maverick Jared Padalecki did the unthinkable -he sought comfort in the arms of his brother's fiancee. The morning after, they both realized their mistake and left for their separate lives. Only Jared can't forget Jensen's soft lips and beautiful eyes. Even as Jared was beginning to think he had to see him again, Jensen came to him. Jensen was pregnant with his child. His - not his brother's. Jared knew he wanted Jensen more than he'd ever wanted any other woman or man. First he had to marry him. Then he had to make Jensen love him.

Highschoolery by babyofthegroup
Summary: A Jsquared AU that takes place in high school.