From Fanlore
(Redirected from Wingfic)
Jump to navigation Jump to search

Characters who already have wings in canon are also popular subjects of fanworks. Fanfic written for a fandom in which the character canonically has wings (e.g. Good Omens) is usually not considered wingfic. However, as a response to a surge of wingfic, a Good Omens writer came up with wingless fic, wherein canonically winged characters suddenly and inexplicably lose them.[1] Wingfic can be whimsical, but it can also be much darker in tone.

Backstory for the presence of wings varies:

Wing Kink is a related trope which often appears in wingfic (or in fanworks where a canonical character has wings), in which the character's wings are an erogenous zone and caressing them produces pleasurable feelings.

History of the Wingfic Genre 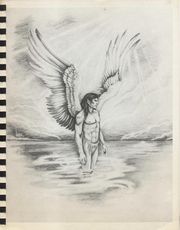 Marilyn Cole's illustration of Spock in Styx and Stones (1987)

The exact date of the emergence of wingfic as a genre is uncertain. It might have already existed in Professionals fandom[2] and existed in Star Trek fandom in the 1980s. For example, Marilyn Cole drew a winged Spock for Naked Times #12 in 1986 and the story Styx and Stones from 1987 by Alexis Fegan Black is wingfic that had an illustration of a winged Spock.

The wings, Spock recalled, had mysteriously grown from his back when he had felt a need for aeriel surveying of his new world. It had begun with what he’d thought a skin irritation of some sort; and, unable to see himself in any type of reflective surface, he had not understood what was happening until the transformation was complete.

And yet… Jim was lost.

Even the wings of a guardian could not shielded him from whatever dreams he was living in the darkest regions of his unconscious mind.

There was one other Spock had learned to do and, dropping his head into his hands, the pale soft wings trembling as his shoulders heaved, he began to weep.[3]

The popularization of wingfic most likely originated in anime fandom, where canon characters are more likely to have wings or to simply be depicted with wings in advertising promos. One of the earliest and better known examples of wingfic would be Natalie Baan's appropriately titled "Wings" (1998).[4]

The Theban Band's art suggests that wingfic existed in the X-Files fandom as well. They had a winged Krycek on their manip site as early as 1999, and other winged Mulder and Krycek manips soon followed. In 2000, these images were part of the fantasy section of the site,[5] together with other hybrids. By 2001, winged characters had their own subpage[6], and in 2002, there was a subsection on the fantasy page that was called wings.[7] The Theban Band's website has a disclaimer on every page stating that "these images are manipulated to illustrate these characters as portrayed in slash fanfiction and are in no way intended to represent the actors who play these characters."

Wingfic was definitely visible in popslash by 2001.[8] Since popslash was a mixing fandom, many media fans met anime fans for the first time (and vice versa). From popslash, wingfic spread to Lotrips,[9] where it became wildly popular. Its popularity in Lotrips even inspired a few horn!fic and tail!fic stories in which horns and/or tails were either a surprise or, in AU fics, normal. Once a rare bird, wingfic is now observed quite regularly in most fandoms. See also fannish osmosis.

The pan-fandom popularity of this genre may simply come down to the appealing imagery. Or possibly to the fact that it is hilarious, and distills the crackfic impulse of fanfic into its purest form.

Wings are popular additions to cosplay, although these tend to be confined to cosplays which depict a character who already has wings in canon. Due to the popularity and technical difficulty of making cosplay wings, the internet abounds with tutorials, examples and how-to guides on making cosplay wings: from mechanical, to feathered, to articulated, to stained glass or butterfly wings. Some guides are general, whilst others focus on how to make cosplay wings for a particular character.

Some examples of character-specific cosplay tutorials:

Featherbent is a notable example of wingfic in the Homestuck fandom. It is a series of fan-made games with original art, music, and voice acting. The series creates an entire society for the characters to function in, all based around their wings, and is an especially in-depth example of wingfic. During the height of its popularity, it amassed a large group of fans, who created art, fanfiction, and cosplays for the AU. Examples of the fanworks of this fanwork can be seen on the Featherbent fanwork blog.

"I love wing fic, and wing kink. Discovered it with Reveled in Supernatural. My main 'draw' to it was how they kinda 'talk' movement giving away emotion or feeling that the character wanted to keep hidden. It was a nice way to explain why Cas didn't really emote much, cause Angels emote with their wings, which humans normally dont see."[10]

On Suspension of Disbelief

"I love wingfics. I'm one of the folks affected by the suspension of disbelief problem though. Wingfics in Good Omens, Supernatural, X-Men, etc - perfect. The worlds have magic/gods/supernatural/sci-fi happenings, so it is entirely within the realm of possibility that wings might be a thing that exist on a person. But in worlds where such circumstances simply don't exist, such as Sherlock, I never read wingfics. There's no in-universe fantasy or sci-fi explanation for the wings to exist, so my mind just can't make the leap. Now, I'm off to find me a good wingfic... :)"[11]

"I don't particularly like Wingfics because throughout the whole fic I just think about how their clothes work and it just takes me out of the story.