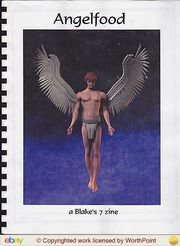 the front cover's artist was Randym 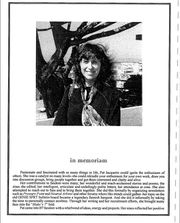 Angelfood is a slash 186-page Blake's 7 anthology with a color cover. It is a tribute zine for Pat Jacquerie and premiered at Eclecticon 2002.

The art is by Cody Nelson, Leah Rosenthal and Randym.

"21 percent of the stories in Angelfood are archived on the web. Details may be found in the Table of Contents." This refers to stories that were "archived, in whole or in part, in unedited for at TarrantNostra.com" and "previously posted to the unarchived adult B7 mail list."

The zine explains that "angel food" is a pilot, a gay man in the Air Force.

From the publisher's online flyer: "Angelfood is in memory of fan writer and editor Pat Jacquerie, who had planned to produce an Avon/Tarrant zine herself if illness hadn't intervened. She chose the title, Angelfood--which is gay slang for a pilot--because it tied in nicely with Tarrant's vocation.

We also included some of Pat's own stories, which are a mix of somber and humorous, short and long. Those stories showcase the impressive range of her writing talent. [1]

The zine you're holding is the culmination of an idea first put forth by that exemplary fan, writer, editor, and friend, Pat Jacquerie. Before she became ill several years ago, Pat began making preliminary plans to produce a zine featuring her favorite Blake's 7 slash pairing, Avon/Tarrant. She decided to title the zine Angelfood, basing the name on a definition very like the one above, which tied in nicely with Tarrant's vocation as a space pilot.

Unfortunately, Pat became ill shortly thereafter and was unable to complete the project. After her untimely passing, a group of her friends began fumbling about for a way to memorialize Pat and her indomitable spirit. When the possibility was put forth that perhaps we could finish Angelfood for her, it was adopted with great enthusiasm. Pat loved fanfiction and the writing process-what better way to honor her memory than to produce a zine of which she'd be proud?

Angelfood contains not only a couple of completely new stories, but also web-archived stories and ones that have appeared on electronic mailing lists and in the low-circulation print Tarrant APA, On the Wing. All of the stories that are archived or have previously appeared elsewhere have been edited and revised for Angelfood. Our goal was to assemble a collection of fiction from various authors that we felt would appeal to Pat's tastes, and we like to think that we've succeeded.

We also included some of Pat's own stories, several of which we hope will be new to you. There are somber stories and humorous ones, including vignettes; epilogues to other stories; a Christmas in Pat's own Fargone universe; and a serious story—alas, unfinished-that we felt deserved to be shared with her readers. If this is the first time you've read Pat's fiction, you're in for a treat. If you're already one of her fans, you know you'll be reading some elegantly crafted, involving stories. We hope Angelfood will inspire readers to seek out more of Pat's fiction, both in the many zines she contributed to and produced, and at her two online fiction sites at TarrantNostra.com: "Pat's Fanfic Page" on the main site and "Pat's Place" in the "Forbidden Zone."

Several stories in Angelfood are sequels or epilogues to works published in other zines, notably in Southern Seven, Southern Comfort, and Dark Fantasies. The story and zine titles and contact information are noted on the stories themselves, but we'll repeat the contact information here for your convenience: Dark Fantasies zines are available from Maverick Press, c/o Jo Ann McCoy [address redacted] or via the web through www.knightwriter.org. Southern Seven and Southern Comfort zines are available from Ashton Press [address redacted], or via the web at http://ashtonpress.net/

Bringing Angelfood to life was a long process involving many people. Thanks, first of all, to the contributors, who gave us permission to reprint their stories and art (and, in the case of the authors, agreed to go through the editing process). Thanks, also to the authors and artists who labored mightily to produce new works especially for this zine, Thanks to the proofreaders, Cody Nelson, Jenner, and Jiltanith, whose sharp eyes helped us to avoid many typos and other errors. Thanks to Aurora, for giving us the nod to reprint Pat's stories and for suggesting a few others that we'd overlooked. Thanks to all of Pat's friends who contributed their thoughts to the "In Memoriam" section. Thank you to Annie Wortham and Leah Rosenthal for allowing us to reprint Leah's hilarious cartoon. And many thanks to Jo Ann McCoy of Maverick Press, for being crazy enough to... er, being kind enough to agree to format and publish Angelfood for us, and for lending us the wisdom gleaned from years of experience in the world of zine publishing.

Biggest thanks of all, though, must go to Pat Jacquerie. She has been our inspiration the entire way. Pat, we hope you like what we came up with!