Susan Cutter is a prolific Blake's 7 fan author and poet who was most active in the mid-to-late 1990s and early 2000s. Her writing was awarded multiple Fan Q and STIFfie awards.

Susan is best known for her adult stories, which feature a hugely inventive range of pairings, both het and slash. Her favourite pairing is perhaps Avon/Tarrant, but she's written just about everything -- including the story ('A Dream') responsible for Sarah Thompson's coinage of the term "leafy het" to describe the very strange dream sequence in which Dayna is ravished by the topiary bear![1]

Unusually, her writing frequently includes good roles for Dayna and Soolin, and she has also been praised for her original characters. Susan has also written gen.

Most of her work was published in fanzines, including Angelfood, Dark Fantasies 6, Diverse Doings series, D.S.V. 3, Fire and Ice 4, Forbidden Star 2, Pressure Point, Southern Comfort 10.5, Southern Seven 11, Tales from Space City series, TTBA, and others. She also published work on the Space City and Freedom City mailing lists. Little is currently available online, but Susan has one story archived at Hermit Library and another at the TTBA archive. 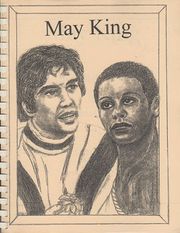 May King cover, by Whitby27

Susan was active on the Lysator and Space City/Freedom City lists, and she hosted Space City.[5] She was a founder member of Avon Without Guilt with Pat Jacquerie.[5]