Diverse Doings is a slash multimedia fanzine, with many Fan Quality Award winning stories. It ran at twelve issues. 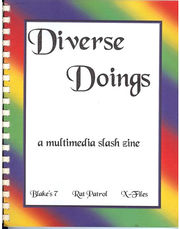 Diverse Doings 1 was published in November 1997 and is 131 pages long.

And here's my very favorite of the Round-heeled Robins, together with two more goodies for Tarrant fanciers and a crossover by a familiar Klingon (Yuchtar, are you still with us?).

The former Robin is now "Mind Games," with the original vignette inserted into a virtual-reality plot. Even though I like the frame story, I think I might actually have preferred to see the inner story standing on its own. It's the only sex story I can think of that involves the Decimas, and very funny it is, too. It's such a clever idea that I regret seeing it reduced, as it were, to a mere fantasy. Recommended!

"An Embarassment of Riches" opens with farce, as Dayna plays an embarrassing practical joke on Avon and Tarrant. It then takes a more serious turn, as the two of them take the opportunity to become better acquainted.

"Life Watch" is basically serious but with some funny elements. After the events of Deathwatch, Tarrant suddenly seems to find Avon irresistable. An earlier remark by Vila gives us a clue as to why that may be happening-- perhaps.

Yuchtar's story pairs Avon with Straker of UFO. It's an interesting idea, but I felt that the plot suffered as a result of overemphasis on the sex. How, you may reasonably ask, can there be too much sex? Well, it's just that the necessary setup for the crossover cries out for more explanation than it gets; and I can't help but feel that Avon would be inclined, both out of scientific curiousity and his famous sense of self-preservation, to spend more time worrying about what's going on and relatively less time considering Straker's charms, considerable as they are. 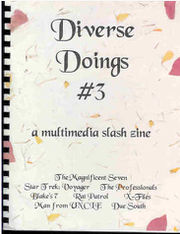 Diverse Doings 3 was published in November 1998 and contains 172 pages. Art by Anja Gruber, Whitby27 and others.

"Zipper," is a short, sweet, sad tale of fourth-season Avon's thoughts about Blake.

"Present" continues the A/Ta relationship begun in the award- winning story "Anniversary." Avon reacts predictably to the previous incident, but Tarrant launches a well-planned campaign to change his mind.

Both stories are very hot and very enjoyable! Oh, and I note that Diverse Doings #3 also has non-B7 stories by two other Citizens, Andrea (a Voyager story) and Mireille (X-Files, M/K). I confess that I haven't read those stories yet, as I intend to gobble up my B7 goodies first; but anything from those authors is sure to be good.[2] 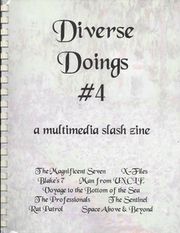 DD #4 has another of Julia Stamford's elegantly written, emotionally wrenching A/B stories. In contrast to the more common setup in which Blake suffers unrequited desire for Avon, here it's the other way around. Blake decides spontaneously to do a good deed; but in the B7 universe that's often not a good idea. I hesitate to recommend buying an entire zine on the basis of one story, especially when I haven't read the others; but if the other stories are as good as this one, and if you like the other fandoms, then the zine is an excellent buy.[3] 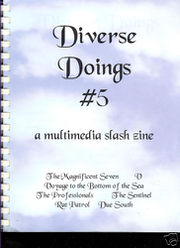 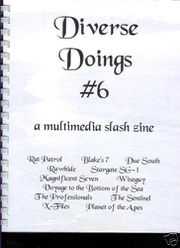 Diverse Doings 6 was published in November 2000 and is 178 pages long. 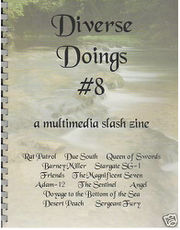 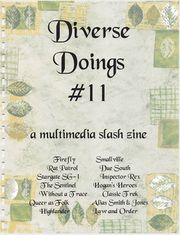 Diverse Doings 12 has a cover by Angellise.