Zen and the Art of Rebellion

Zen and the Art of Rebellion is a gen (though some reviews mention "slashy" material) Blake's 7 anthology. 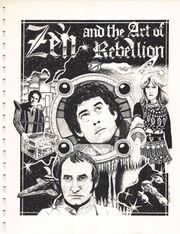 Carol mentioned this zine a little while ago on Lysator as one that's especially good for Tarrant stories. It is indeed, and it also has some good stuff on other often-neglected characters like Jenna and Gan.

This is #1 of 3 issues; I understand that #4 was planned but probably won't be published after all, alas.

It's an extremely attractive zine visually, with a well-designed layout and lots of nice art. Some may consider the typeface too large, but I found it pleasantly readable.

The "FSA Cadet Blues" cartoons by Leigh Moto'oka won a Fan Q, as I recall. They are an absolute scream. I'm very tempted to quote, but I won't-- find the zine and read for yourself, with the accompanying illos!

There are some familiar names among the authors here. :) Carol, "Words Spoken" is such a good, low-key refutation to the "I Hate Tarrant Because He Bullied Poor Vila" crowd. Maybe you should consider establishing an online gen Tarrant fiction archive, similar to the new A/Ta fiction archive, with stories like this and "The Shores of Innocence," if authors and editors permit?

"The Shores of Innocence" is one of my favorite gen Tarrant stories. Due to a head injury, Tarrant loses the memory of the last few years of his life and is suddenly once again a gungho young Federation officer. The Scorpio crew lose a crewmate and gain a very dangerous prisoner. How will they deal with the situation?

There's another good Tarrant-Vila story by Lorna, but my favorite of her stories in this issue (excellent as they all are) is the very touching Gan story, "Worth Dying For." Worried about the upcoming mission to Earth, Gan consults Orac as to its probable outcome. The decision that he then makes shows him as a true hero. Read this one, Gan fans!

The story is followed by Anne Stullken's Gan poem, which reflects my own view of the character beautifully. Anne, are you lurking? If so, take a bow!

The other poems are several cuts above the usual fannish level and well worth reading also.

And for Blake fans, I recommend Carol's PWB Blake story. She may be the Godmother of the Tarrant Nostra, but she has a good handle on other characters as well.

C. K. Smith's Jenna story is good too. Also for Jenna fans- I think I forgot to point out the Jenna series by Helen Woolverton in Dr. Bellfriar's Memorial Journal, but you'll definitely want to read that.[1]

Before I even turned to the first page of Zen and the Art of Rebellion, I knew I was in for a good time. The cover was enough to impress me vivid, beautiful and fascinating. I recall praising Michael Macomber before for his excellent poetry, and now I can definitely say that he and his co-editor Caryn Dunkel have put together a very pretty and solid zine.

Michael and Caryn have attracted some well-written material for this effort, particularly Worth Dying For and A Nod is as Good as a Win by Lorna B., and Diverging Pathways by Alison Berkeley and Carol McCoy. In fact I could recommend every story in this zine, which is a pleasure and a surprise, particularly in a first effort. The Share of Innocence showed a surprising rapport between Avon and Tarrant that I found unlikely at first, but author Leigh Moto'oka managed to pull me in and sweep me along very nicely. Pat Nussman's poem The Lovers may very well be my new favorite; she has a beautiful facility with words that comes all too rarely, even in poets.

The art is superior and evocative, particularly Ken Horan's interesting work. Leigh Moto'oka's cartoons were funny, particularly her explanation of Servalan's "prom gowns," but I especially liked her portrait of Tarrant that accompanied The Shore of Innocence. Looking over Zen and the Art of Rebellion, I'm struck by the fact that there wasn't any art I didn't like; either I'm too easy to please or this is a very high quality piece of work.

I think if s a very high quality piece of work. Congratulations to Macomber and Dunkel for a job well done; I look forward to their next effort. Congratulations, too, to the contributors who, one and all, have put forth an impressive body of work. 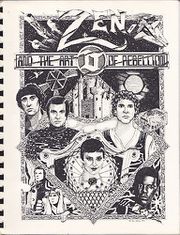 This issue has one of the most beautiful pieces of slash art I've ever seen. What, you may well ask, is it doing in a genzine? Well, it's been recycled, you see, although in such a completely appropriate way that you'd never know it started life with a different title. This is the lovely portrait of Avon and Tarrant in elaborate fantasy costumes, by Leigh Motooka. It originally appeared in the Tarrant apa, On the Wing, as a kind of visual AU, showing the two of them as Tanith Lee's demon princes, Azhrarn and Hazrond. (And as for why that's slash, well, read Lee!)

Here it illustrates another one of my favorite gen A-Ta stories, Carol's "Lest There Be Dragons." PGP, Servalan has conditioned both A and T and is keeping them as her toys in a fairytale castle. But Lord Avon has an uneasy feeling that there is something wrong with their luxurious existence. There's a semi-tragic ending. I would LOVE a slash sequel, hint hint!

The long story by Marla Fair also has a hint of slashiness. A and B have an adventure on a planet; at the end it turns out that they were selected for that purpose by the local telepathic aliens because of the bond between them.

"Running Amuck" is a funny Vila-Soolin story that could very easily become Vila/Soolin if one were so inclined.

"Avenging Angel" is about as far in tone from "Running Amuck" as a story can get, and shows how Lorna earned her title of Terminatrix. Yes, folks, she snuffs her own favorite in this one! (Then there's also a story in which she snuffs the entire human race, but that's another zine.) What I like especially about the story is the way it shows the remnants of the Scorpio crew coming together as a kind of gestalt as a result of mutual torture. (Come to think of it, "Instruments of Darkness" in Dark Fantasies was probably influenced by this story.) Although the overall tone is dark, there's a hopeful ending. And y'know, I could imagine a sequel in which the survivors come together sexually. (I seem bent on smuttifying gen stories tonight!)

In "Birds of a Feather," Vila and Slave strike up a beautiful friendship after the entire rest of the crew meet with an unfortunate accident over Malodaar. I'm sure that when Vila discovers that special programming Dorian installed in Robin's story, they'll become even closer. :)

Oh, and there's an exceedingly slashy illo by Phoenix for the A-B alternate Orbit story.[3] 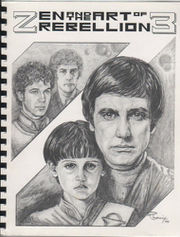 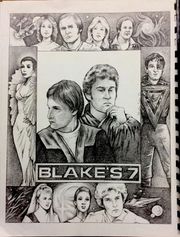 "Insects in Amber" is another of my favorite gen stories. This is a must-read if you're a fan of "Sarcophagus." It follows the fates of Tarrant (the POV character), Dayna, and Vila in a universe in which Cally did *not* prevent the alien from killing Avon. The three survivors are her "intelligent menials," scheming desperately to defeat her and escape. But Tarrant becomes her lover.... The writing style is lushly visual and well captures the atmosphere of the Tanith Lee ep.

There's romance, though no sex, in Alice Aldridge's Travis story. She gives Travis a love interest whose loss reinforces his hatred of Blake. Does anyone know if this story is in the same universe as her Travis/Jenna (gen) series? I'm not sure.

Pat J. has a short story that twists the tragedy of GP into a happy ending after all, thanks to Tarrant's underutilized abilities. And there's a wonderful long A-Ta story, "Not Quite Friends," by Carol and Patti McClellan, that is also the subject of the yummy cover by Phoenix.[4]

This zine has something for everyone. Some good alternate universe Bloke's 7 stories, humor, drama, poetry, some wonderful art, tragedy, post-Gauda Prime conniving, and even a Gothic tale (I won't say which one!) My favorite pairs of stories are the first and last in the zine. They are both alternate takes on Orbit, in which the scientist Egrorian builds the Tachyon funnel, leading to Avon's and Vila's famous encounter in the shuttle. I won't spoil anything, but I will say these held my attention. 1 always like alternate universe stories, of which these are both good examples, whimsically placed in opposition to each other in the zine.

Between these two tidbits, we find a somewhat mind-wiped Dayna tracking down the Liberator crew one by one for vengeance. This post-Gauda Prime tale uses Dayna's memories of her father against her former shipmates. Very well written drama is the hallmark of this one. We also find Addiction, starring Tarrant. What grave secret is he keeping deep in the holds of the ship? Something from old Earth — an ancient substance! Following these stories is a rather long, but interesting, study of what happens when the computers rule the Liberator's fate. Though somewhat a mystery as to what's happening until the last page, a surprise ending (well, it surprised me!) makes the story a read worth the journey. This story tends to be a bit too mysterious, and therefore difficult to read, switching back and forth between several places, times, and viewpoints. The story was, however, well conceived.

Alter this, Vila gets himself in a sticky situation once again, although a bit more deeply than he would have preferred. Survivors explores the bonds of friendship between Blake and Avon (just friends, guys, really) as the Liberator is hit — and Avon is near death. This is a good piece of fiction, exploring a truly alien race (a relative rarity in Blake's 7 stories) as well as highlighting our own humanity.

Lest then be Dragons is a rather Gothic tale involving Lord's Avon and Tarrant with Queen Servalan. Is it real or is it a mind wipe? And if the Lords have lost their memories, how will they know? Some good relationship testing occurs as true personalities emerge from darkness.

With poetry, jokes, cartoons, and very nice illustrations interspersed between stories, Zen and the Art of Rebellion II does indeed have something for everyone. Enjoy it.[5]