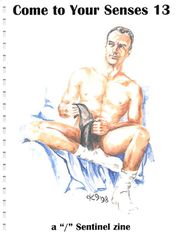 fanon alert! The cover of the zine, Come to Your Senses, Jim decked out in white socks, art by K9

Jim Ellison is a main character on the television show The Sentinel, played by Richard Burgi. Jim is a "Sentinel," or a person with super senses (sight, hearing, smell, touch, taste). As a police officer, Jim uses his superpower to fight crime, guided by his unofficial partner, Blair Sandburg, the other half of the popular slash pairing Jim/Blair. Most of the fanfic and fannish discussion centers around his Sentinel abilities, his work as a detective, and the relationships in his life (or lack thereof.)

Jim's super senses often help him in his police work; he is able to see small details, overhear conversation without use of listening devices, track criminals, and perceive other helpful information. His super sight also seems to give him perfect aim. [2] However, these senses don't seem to stop Jim from dropping his gun repeatedly. Some fic challenges have been made where Jim's senses are the point of the challenge, whether they be the subject of Blair's testing, some known drawback, or Jim's use of said senses to fight crime. Much discussion has also been made regarding just how far Jim's senses extend.

Jim is portrayed as an upstanding paragon of justice with an unshakeable sense of right. He can tend to be set in his ways and standoffish. His reserve can make him seem unemotional, but he is affectionate and loyal with his closest friends.

The fannish Jim is often depicted as a clam.

In the pilot it is stated that he is a part of a "team from 7th Group" and Jim states he is ODA 731 (Operational Detachment - A Team 7th Special Forces Group, 3rd Battalion, 1st company) when he is found. Canon repeatedly states that he is an Army Ranger and participated in "Covert Ops". 7th group is Army Special Forces - Green Beret. His perceived military background is relevant in various fanfics.

As a character, Jim suffers a lot from fannish Hero Bashing.

Within the Jim/Blair sector of the fandom, some fans self-identified as "Jimbabes" or "Blairbabes" in the late 1990s.

In slash fiction, fannish opinion diverges on whether Jim is a natural top or a natural bottom. Meghan Black established a popular page called Born to Bottom, listing her favorite "bottom!Jim" stories, which served as the inspiration for similar recs pages in other fandoms.

While the vast majority of slash fanworks depict a Jim/Blair pairing, Jim is sometimes matched with others.