852 Prospect is a slash Jim/Blair anthology zine. It has two issues.

852 Prospect 1 was published Spring 1998. It is full size and has 248 pages. The cover is by Karen River. Interior artists are Anji Towski, MegaRed, KOZ, H. Ann Walton, Peej, Kate Nuernberg. 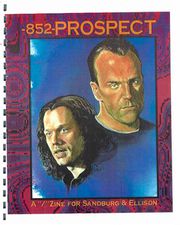 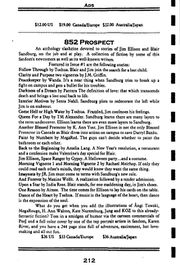 flyer for issue #1, printed in Missing Links #2
From the editorial:

When we first decided to do a zine about our particular favorite pairing from The Sentinel -- Ellison and Sandburg -- we were worried that we wouldn't be able to find any writers. Considering how many zines were already out there, who would have enough time in their busy writing schedules (both online and off) to send yet another zine some fiction? Our concerns were ill-founded. We no sooner started promoting our proposed zine on Senad - - the online "!' letter list -- than the folks you'll find in these pages started to respond.

These contributors were an absolute delight to work with. Some we were already familiar with from our little digest-sized missing scene zine, Missing Links and some were completely new to us. All came to us with wonderful stories to tell and illustrations to ogle. We have to thank each and everyone of them right up front because you wouldn't be holding this zine in your hands if it wasn't for them. Thank you guys, for making our premier issue the success it is. Look at the size of this thing! Our first issue is filled with a wide variety of stories from humorous to serious and all points in between. Long stories, short stories, vignettes, and poems are here for you to enjoy, along with mucho art and fun. We even have commercial breaks, for gosh sakes! We hope this will kind-of be like turning on the telly and getting an episode or twenty that make you do a double take. Our writers and artists make sure you get to see all kinds of stuff you can't see on TV. While this is a Jim and Blair zine primarily, it doesn't mean you don't see many of the other characters we've all come to love. Simon makes appearances in several of our stories. Daryl's in danger in one as well. We've got a section in back that tells you about all our authors and artists and makes it easy for you to drop them a line letting them know how you enjoyed their work. You'll also be made aware of other zines and online sites where more of their marvelous fiction can be found. What's this about commercials? Well...take some of our most popular commercials, mix in Jim and Blair, add a generous dose of tongue-in·cheek, and stir in one lunatic...er...cartoonist and you have what we hope are commercials you don't want to walk out on.

And our cover! Were we lucky or what? We got the beautiful portrait work of Karen River. This woman knows her way around a color pencil! Our authors and other artists got a matted print of this piece. It's our way of saying thank you. Karen sells prints of her marvelous work. She's not only a terrific artist but a good friend and a fellow fan. This original graces our media wall!

art from issue #1, art from issue #1, KOZ -- Note: Marked as sexually explicit; minimized. While this depicts bondage, it is consensual and playful, rather than violent. This same art is also in issue #2 and is paired with the poem, "Gargoyles in Chains."

852 Prospect 2 was published April 1999. It is full size and has 254 pages. It has a color cover by TM Alexander. Other art by KOZ, H. Ann Walton, Nola Frame-Gray, Larrkin, TM Alexander, Peej, KOZ, and Angelika.

Here we are once again, this time with our second issue of 852 Prospect. Number one was extremely well-received and collecting for number two was amazingly easy. Before we say anything else, we have to thank our wonderfully creative contributors for making this second issue happen. We couldn't have done it without our 'family' of writers and artists. Take a bow, you guys!...

We are really very proud to announce that several of our alumni were nominated for Cascade Awards this year: MegaRouge and H. Ann Walton for art, Karen River for the cover of #1, and JR for her great story "Imaynata." We are extra proud to announce JR took the award for Best Long Story: in a Zine. Annie won Best Newcomer of the Year in the art cate- gory. Congratulations!! We are also proud to anmnounce that 852 Prospect #1 is up for a STIFfie Award this year! We hope you folks out there reading this zine will take the time to nominate your favor- ite writers and artists for some of the awards for fannish excellence that are out there. The STIFfies, The Fan Q's, The Huggy's, and the Cascade Awards. Support the folks who feed your fannish reading addiction!

We would be remiss in our duties as editors if we did not address the cancellation of the show. We can't say we didn't see it coming. Even though UPN brought the show back for eight episodes, they slapped it into a suicide spot against Ally McBeal. Oh sure, chat was a supportive gesture. NOT. With the possibility of the series being picked up by the Sci Fi Channel for first run syndication, we still see a hope for a bright fu- ture and more seasons. It rests upon the shoulders of the fans to continue their support, fo- cussing on USA and the Sci Fi Channel. No matter what happens we will continue to put out 852 Prospect and Missing Links as long as we get submissions that will allow us to do so. And past that we will continue with novels as long as we have stories to tell. This year will find us working hard producing The Sentinel zines you people have told us you want. Tam's cooking on several novels, and I've even been bitten by the writing bug! For us, the show will go on until there are no more words left in our heads.

For now, we won't keep you any longer. Read. Enjoy. We hope to hear from you. We're off to see what we can collect for issue #3! See you next time! 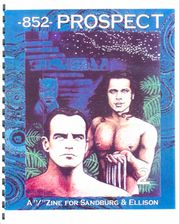