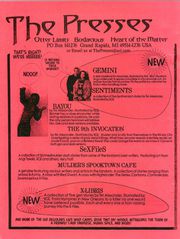 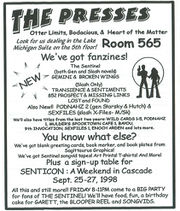 The Presses was a slash and gen fanzine publisher in the late 1990s and early 2000s. It was often used as an umbrella term for all of the presses created by the fans who operated them. These included: Bodacious Press (slash), Otter Limits Press (gen), Heart of the Matter Press. and Lime 'n' deCoconut Press (slash).

How Does This Press Related to Others by This Fan?

Heart of the Matter Press was a subsidiary of our other press that we were doing. We had Bodacious Press was our slash zines, Otter Limits Press was our gen zines, and after some years we decided, let's just call ourselves "The Presses" and put everything underneath it. So, yeah, we were known as "The Presses," because we had so many subsidiaries. [1]

The editor, P.J. Alexander gave an interview in 2001 discussing the appeal of fanzines:

The average writer seems to be female, between the ages of 20 and 40, single, and working in a clerical job. Remember this is an average, there are exceptions in all cases," said P.J. Alexander editor of fanzine publishers The Presses. Ms. Alexander says much of fan fiction's appeal is its friendliness to new writers.

I would say this is a perfect place to hone writing skills," she said.

She points to a long list of professional authors with large followings as proof: Mercedes Lackey (known in fan circles as Misti), Teri Smith, Melanie R., Constance Faddis and Julia Ecklar, to name but a few, are all writers who've crossed the line from amateur fan fiction to professional writing.

Fanzines introduce one to the world of publishing, deadlines, and in some cases, editing, which prepares one for the rigorous field of pro writing," Ms. Alexander said. [2]

On the Cusp of Online

In 2000, fanfiction was on the cusp of print and online. An ad in The Web After Dark reflected this major shift in fanwork creation and access. 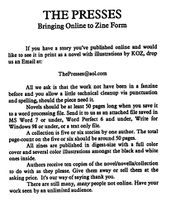 2000 flyer advertising their services
The following is from a flyer illustrating this shift, including the need to explain the difference between a novel and an anthology.

THE PRESSES: Bringing Online to Zine Form: If you have a story you've published online and would like to see it in print as a novel with illustrations by KOZ, drop us an Email...

All we ask is that the work not have been in a fanzine before and you allow a little technical cleanup via punctuation and spelling, should the piece need it.

Novels should be at least 50 pages long when you save it to a word processing file. Send it to us as an attached file saved in MS Word 7 or under, Word Perfect 6 and under, Write for Windows 98 or under, or a text only file.

A collection is five or six stories by one author. The total page-count on the five or six should be around 50 pages.

All zines are published in digest-size with a full color cover and several color illustrations amongst the black and white ones inside.

Authors receive ten copies of the novel/novella/collection to do with as they please. Give them away or sell them at the asking price. It's our way of saying thank you.

There are still many, many people not online. Have your work seen by an unlimited audience. 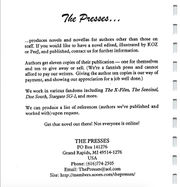 flyer printed in Walking in the Sky

The Presses.... produces novels and novellas for authors other than those on staff. If you would like to have a novel edited, illustrated by KOZ or PeeJ, and published, contact us for further information.

Authors get eleven copies of their publication — one for themselves and ten to give away or sell. (We're a fannish press and cannot afford to pay our writers. Giving the author ten copies is our way of payment, and showing our appreciation for a job well done.)

We work in various fandoms including The X-Files, The Sentinel, Due South, Stargate SG-1, and more.

We can produce a list of references (authors we've published and worked with) upon request.

Get that novel out there! Not everyone is online!