Lost in the Shadows 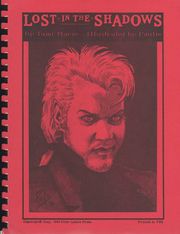 Lost in the Shadows is a slash 90-page Kiefer/Lou novel by Tami Marie based on the movie The Lost Boys starring Kiefer Sutherland. It was illustrated by Paulie.

The zine's dedication reads: "Lost in the Shadows is fondly dedicated to Kiefer and Lou ...and to vampire lovers everywhere."

It is part of a proposed trilogy, only two of which were completed.

From a July 1993 ad in GAZ: "This novella is the sequel to "The Lost Boys" and is part of a trilogy, although each novella stands on its own. (Part 2, POWER PLAY available at a later date). Horns aren't made of wood, you know. David is up and at 'em again after going under for three years. His gang destroyed, his eternal life in upheaval, the white-haired punk-vamp heads for a new feeding ground. Chicago. There he meets Indigo, a Chicano run-away, and a new bond, though troublesome, is formed."

Kiefer/Lou is a real fandom. But actually, you know how it actually started was, I saw Lost Boys. The Lost Boys. Kiefer Sutherland vampire movie. And at the end of it I, he was in, you know, his character, David, is killed by being impaled on a pair of horns. And I'm like, well, "Horns aren't made of wood. He could have just been like, faking it, that he was dead. He's still alive." Because as they walked away from him, he could be still alive. So what I did was write a sequel called "Lost in the Shadows."... Here's the irony of "Lost in the Shadows." I wanted to give an original character. I was creating an original character to play off of his character, David. And I needed somebody, because I like the whole blond/brunet thing. Light and dark. Light and dark. And I was like, well, I need somebody to be my character Indigo. And there was, La Bamba had just come out. And I saw an ad for La Bamba and I said, "This Lou Diamond Phillips guy would look great next to Kiefer Sutherland." This was almost a year before Young Guns, which was the first time they were ever together. And I mean, wow, it just blew me away. Oh my god, you know, and they have, the two of, those two actors, they are like best buds. They are like the new Paul and David. You know, they're that tight in person....But, ah, so basically, "Lost in the Shadows" was in essence the first Kiefer/Lou zine, because I cast my original character, to better visualize him, with Lou Diamond Phillips. And all the illustrations that Paulie did for the zine, it's Lou Diamond Phillips.